One such configuration, given in this answer, is the set of blue points in this diagram; the red line segments all have unit length: 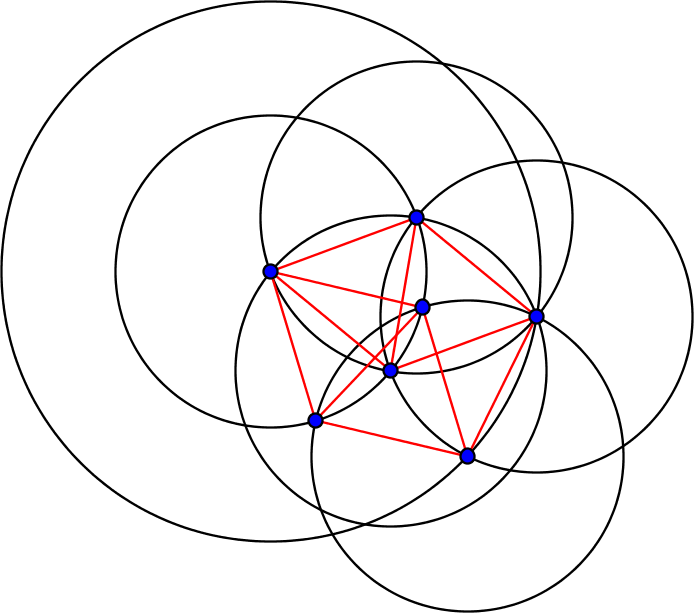 This is an embedding of the Moser Spindle graph.

This raises a natural question:

Is this the unique such configuration up to Euclidean motions?

The answer is yes; the given configuration is the unique such configuration up to Euclidean transformations. I advise to keep pencil and paper at hand when checking the proof.

EDIT: I have completed the proof, and revised most of the earlier part to make the entire proof more 'streamlined'.

Let $P_1,\ldots,P_7$ seven points in the Euclidean plane, such that out of every three points there are at least two at unit distance. Two points are called neighbours if they are at unit distance.

Proposition 1. Every pair of points $P_i$ and $P_j$ has at most two common neighbours.

Proof. Common neighbours of $P_i$ and $P_j$ are on the unit circles centered at $P_i$ and $P_j$. Two circles intersect in at most two points in the Euclidean plane.

Lemma 2. Every point $P_i$ has at least three neighbours.

Lemma 3. Every point $P_i$ has at most four neighbours.

Corollary 4. The number of points with four neighbours is odd.

Proof. Conider the graph with the seven points as its vertices and the pairs of neighbours as its edges. The total degree of the graph, i.e. the sum of the degrees of its vertices, is even. As every vertex has either degree three or four by the lemmas above, the number of vertices of degree three is even and hence the number of vertices of degree four is odd.

Lemma 5. There is precisely one point with four neighbours, and all other points have three neighbours.

Proof. By the corollary there cannot be fewer points with four neighbours. Suppose toward a contradiction that there are more. Then by the corollary there are at least three, say $P_i$, $P_j$ and $P_k$, and by the proposition they are all neighbours. Then each of these three points has two more neighbours, and if these were all distinct we would have a total of nine points. Hence two pairs of neighbours must coincide, so without loss of generality $P_i$ has common neighbours $Q_j$ and $Q_k$ with $P_j$ and $P_k$, distinct from $P_k$ and $P_j$. A picture illustrates the situation: 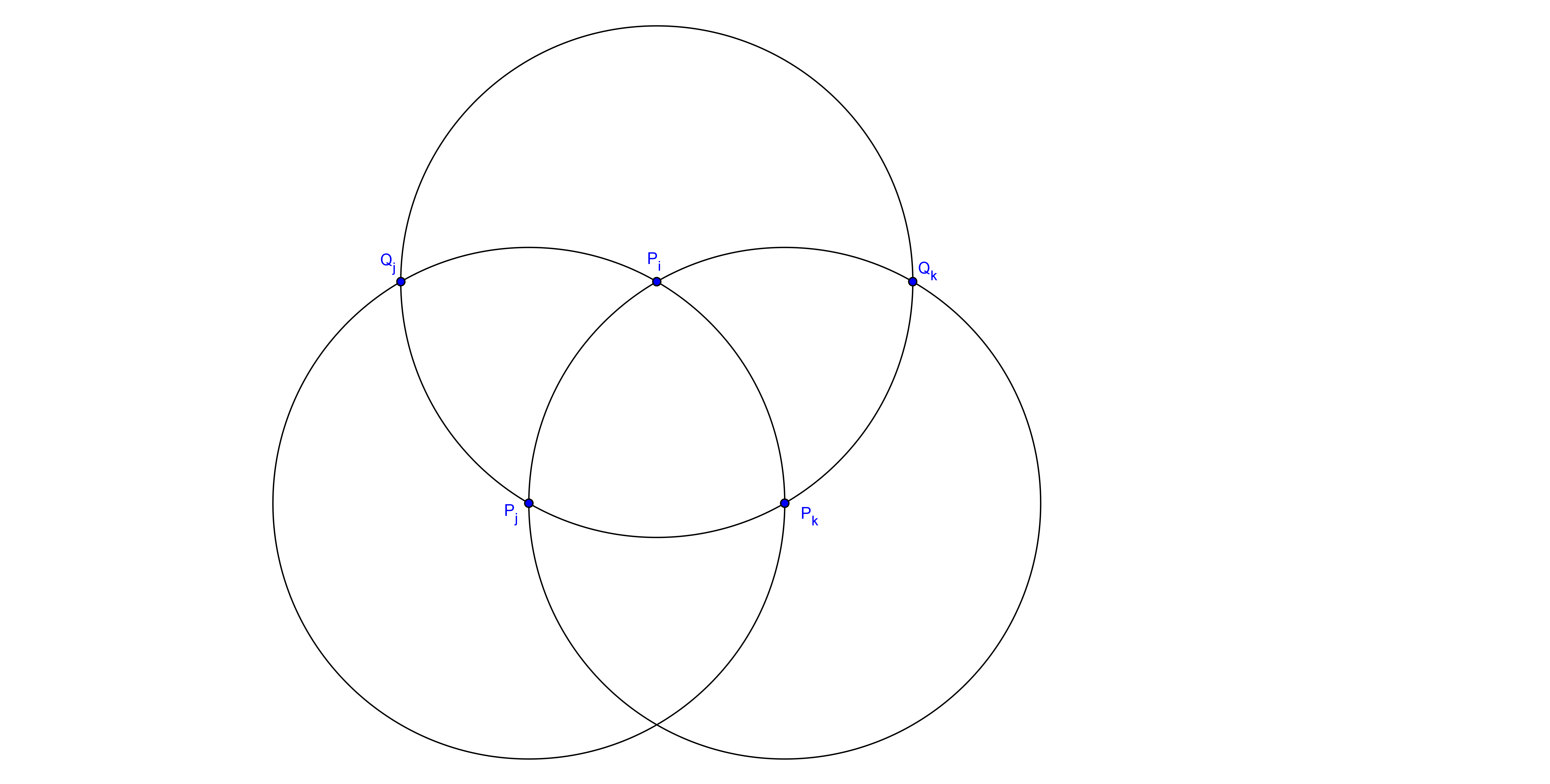 Theorem 6. Up to Euclidean transformations there is a unique configuration of seven points in the Euclidean plane with the property that for any three of the points, two of them are at unit distance.

Not the answer you're looking for? Browse other questions tagged geometry euclidean-geometry plane-geometry or ask your own question.

5
Seven points in the plane such that, among any three, two are a distance $1$ apart

4
Random embedding of $K_4$ in the unit square
11
Configurations of eleven (or more) points in the Euclidean plane, such that out of any four there is a pair at unit distance.
0
How many points among them should we take to ensure that some two of them are less than the distance $1/5$ apart?
2
Find the geometric locus of midpoints of segments connecting a given point with points lying on a given plane.
1
Given n points in the plane, such that the minimal euclidian distance is 1, show that there are at most 3n pairs of points with distance exactly 1
2
How to derive coordinates of the vertices in the unit-distance embedding of the Golomb Graph?
6
Is classical Euclidean geometry Turing complete?
4
Is there a name for the set defined by the Minkowski sum of circles in orthogonal planes?