Some obvious remarks on the question :

$\bullet$ It also seems that the edges between "adjacent extremal points of the convex hull'' (I don't know how to call these) always satisfy the property, as we may take a sphere with a centre far away.

This shows that this property is not really trivial. I have made a small approximate figure in the plane here, with the green edges representing the edges satisfying my problem (I only have an online drawing tool available :) ): 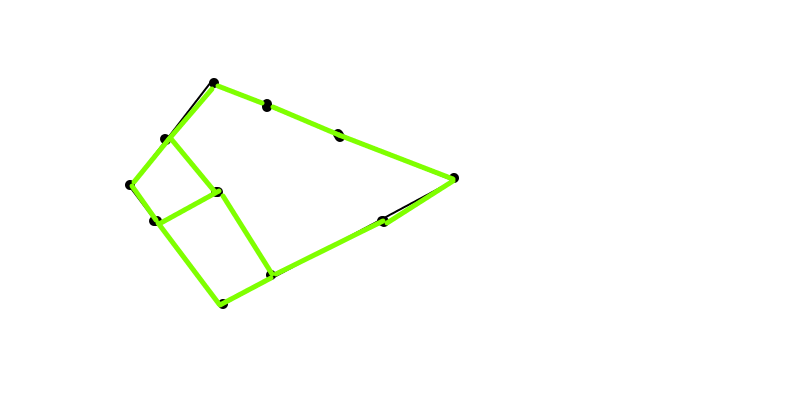 I am really looking for any necessary and/or sufficient condition, or reference if this has a name. Of course a partial answer on the plane would be nice already.

My further objective is to get a necessary and sufficient condition for the same property but for more than two points, and to impose that the center of the sphere lies outside the convex hull of the points.

Now consider any third point $x_k$ in the given set of points. If it happens that $x_k$ lies interior to the segment joining $x_i,x_j$ then $(x_i,x_j)$ does not verify the property (as noted by the OP). Secondly if $x_k$ happens to lie elsewhere on the line through $x_i,x_j$ then this $x_k$ will be outside the ball $B$ so has no effect on the question whether $(x_i,x_j)$ verifies the property.

Needed adjustment: In case the circle bounding ball $B$ through $x_i,x_j,x_k$ has all other points strictly outside it, then that $B$ does not verify the property for the pair $(x_i,x_j).$ However since all other points are at strictly positive distance from $B,$ the bsall $B$ may be adjusted slightly so as to have $x_i,x_j$ on its bounding circle but hsve $x_k$ and all remaining points strictly outside it.

I may need to elaborate on why the failure of all tested $x_k$ proves the pair $(x_i,x_j)$ does not verify the property. (Will return to this later if I can word that argument well.)

3
If neither of two planar shapes are strictly convex, is it ever the case that they can only ever touch at one point?
1
Longitude and Coordinates
2
Given two sets of points in the plane, there exists a point with equal sum of distances to the points in each set
7
When do $n+2$ points in $\mathbb{R}^n$ lie on a same $(n-1)$-sphere?
2
Octahedra with four equilateral faces