Algorithm to find shortest path to net values across nodes 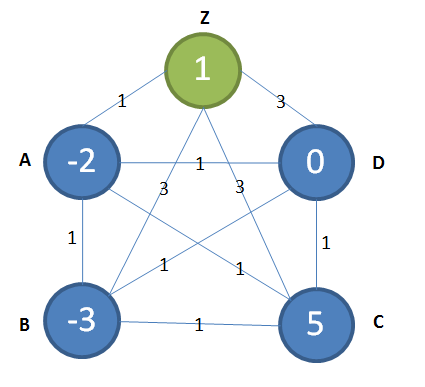 In the above image, the big numbers in each node $v$ represent $n_v$ and the little numbers along each vertex $e$ represent $f(e)$.

By only netting nodes, I wish to make node $Z$ (green) the only non-zero node. I also want this done at minimal cost.

Does anyone know of an algorithm that does this at minimal cost?

Using an application for motivation, imagine we are a charity distributing medicine across cities in a country with a viral outbreak. The situation is rapidly evolving as the virus spreads or as people get better, and so some cities may find they have a shortage of medicine while others have surplus medicine. 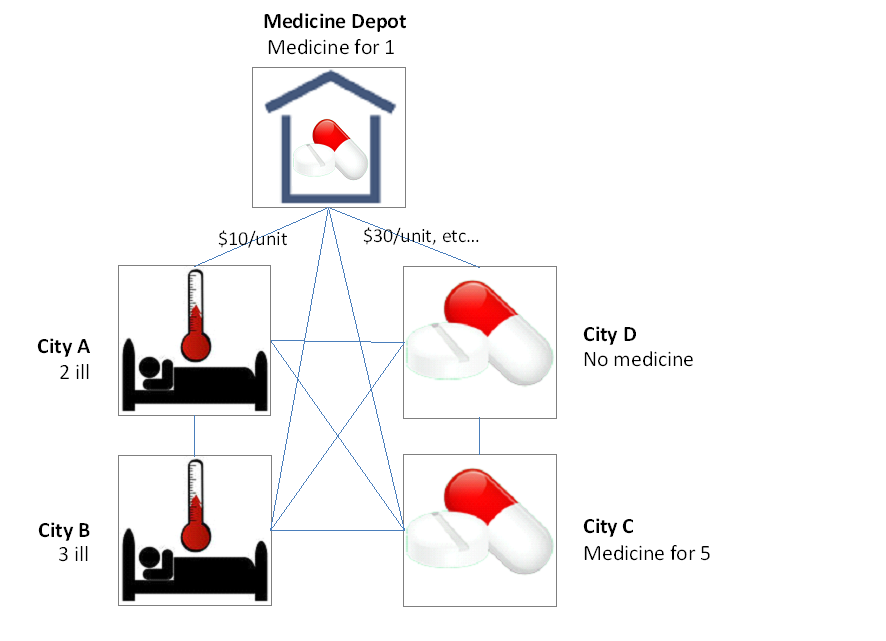 Seems to be solved immediately by transforming it into a min cost max flow problem (with multiple sources and sinks). First, calculate the sum of all the nodes' values --- this will be node Z's final value (the final value for all other nodes are by definition 0). For a node, consider the difference between their final value and their initial value -- if the initial value is larger, you need to move some of its content around, otherwise it will receive some things from other nodes. Thus, for the former case, it can be treated as one of the multiple sources, and the latter case is treated as one of the multiple sinks.

Each edge shall have infinite capacity and have a cost equal to $f(e)$. The cost of the min-cost max-flow of this graph is exactly the minimum cost required.

Note that this will work even if there are edges with negative value, but negative cycles will result in the algorithm working incorrectly.

Not the answer you're looking for? Browse other questions tagged combinatorics discrete-mathematics graph-theory algorithms discrete-optimization or ask your own question.

2
Interval scheduling by minimum spanning tree
3
Parametric Weighted Graph problem
1
Graph theory - how to find nodes reachable from the given node under certain cost
4
Knapsack in graph
1
How do I solve this problem from graph theory?
0
Minimal cost(shortest path)
0
Looking for a graph algorithm that finds the path with minimum cost, considering multiple starting points