Start and end point of a rotated ellipse

I have the data of an incomplete ellipse and I need to retreive the minimun information in order to describe an elliptical arc. In particular following are my ellipse data:

And for the arc I need the following information:

What equations I need to use in order to get this data?

Following is an example. Given this ellipse: 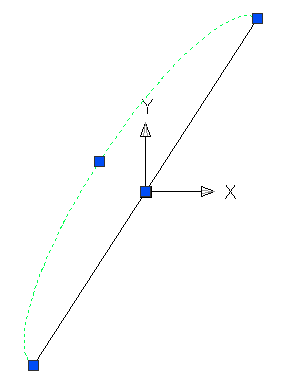 I tried by using the classic ellipse equation but it works with some ellipses and not for other (like for example the above one).

Suppose we start with these (generalized) input data:

For simplicity of exposition, I'll assume that angles are given in the same units that are expected as input by the sine and cosine functions that you will use when implementing this algorithm. I will also assume that in both the coordinate systems you work in (input and output), to rotate a vector that (initially) points in the direction of the positive $x$-axis so that it ends up pointing in the direction of the positive $y$-axis, you would rotate it through a positive angle of $90$ degrees or $\frac\pi2$ radians.

I will assume that the vector $(a_x, a_y)$ represents the displacement vector from the center of the ellipse to one end of the major axis. Then the direction of this vector is $\psi = \text{atan2}(a_y,a_x)$, where $\text{atan2}(\cdot)$ is the two-parameter arc tangent function available in many computer math libraries.

There are at least two ways that angular values measured from the center of an ellipse are used to describe points on the ellipse. One is the actual angle between the vector from the center to the point in question and a vector parallel to the major axis. The other way is to use the so-called eccentric anomaly. The eccentric anomaly is what you see when someone parameterizes an ellipse in the form $(x,y) = (a \cos \theta, b \sin \theta).$ One way to tell which of these your graphic library uses is to draw an ellipse whose minor axis is $0.1$ times the major axis, starting at an angle of $45$ degrees (or $\frac\pi4$) and ending at an angle of $135$ degrees (or $\frac{3\pi}4$). If the library interprets the angles as actual angles, it will draw an arc whose length is about $20\%$ of the length of the major axis. If the library interprets each angle as an eccentric anomaly then the arc length will be about $70\%$ of the length of the major axis.

I'll assume we're using real angles, not eccentric anomaly. The polar equation for an ellipse centered at the origin, with axes $a$ and $b$ parallel to the coordinate axes is $$ r = \frac{ab}{\sqrt{b\cos^2\theta + a\sin^2\theta}}. \tag 1$$

Actually I seem to recall that SVG lets you translate and rotate pieces of the drawing individually, so maybe you could just use Equation $(2)$ to find out where the starting and ending points would be if the ellipse were centered at $(0,0)$ at an angle of $0$, then move the resulting arc to where it actually should be.

It's possible that some of this is based on mistaken assumptions about how the two graphics systems work. If it is a simple mistake such as drawing the figure upside down or rotating it in the wrong direction, a judicious change of sign in one of the equations will probably fix it. I usually end up figuring out that sort of thing by trial and error (since there are usually only two choices and one will clearly be wrong).

1
Ellipse : Equation to find “h” X co-ordinate of ellipse tangent to circle
0
Find the intersection of a line (segment) and an ellipse (from the center of ellipse)
5
Normal to Ellipse and Angle at Major Axis
1
find the center of an ellipse given tangent point and angle
3
How to get radius at any specific point in ellipse
1
Plotting a skew ellipse
0
Finding points on ellipse given point on another ellipse in 3 dimensions
0
Find elliptical arc center given start point, sweep and start angle and radiuses
0
length of an arm from a point along major axis of ellipse
0
Rotate a Point on an ellipse by an angle and calculate the distance between them