what would a planetary orbit look like if gravity had constant magnitude?

So the particle is always accelerating towards the origin with constant acceleration magnitude $1$. Stated as a differential equation, working in the $x$-$y$ plane, the particle's position as a function of time $\mathbf{p}(t){=}(x(t),y(t))$ satisfies: $$\ddot{\mathbf{p}}(t) = -\mathbf{p}(t)/\Vert\mathbf{p}(t)\Vert.$$ If we are additionally given initial position $\mathbf{p}(0)$ and velocity $\mathbf{v}(0)=\dot{\mathbf{p}}(0)$, then the function $\mathbf{p}$ is completely determined, and it can be easily computed numerically to any desired accuracy by simply iterating the following with small enough timestep $dt$: \begin{align} \mathbf{a} &\leftarrow -\mathbf{p}/\Vert\mathbf{p}\Vert \\ \mathbf{v} &\leftarrow \mathbf{v} + \mathbf{a}\,\,dt \\ \mathbf{p} &\leftarrow \mathbf{p} + \mathbf{v}\,\,dt \end{align}

My question: is $\mathbf{p}(t)$ a well-known function, and does it have a closed form?

Another simple case is when the initial velocity is zero or collinear with the position and the origin; in this case it's a 1-dimensional problem and the position can easily be seen to be a simple piecewise quadratic function of time.

But what if the initial conditions are not so nicely aligned?

To get an idea of the shapes that are possible, I've made some plots, using gnuplot, of simulations using the simple evolution algorithm I described earlier, with $dt = 1/10000$ degree $\approx .00000175$. 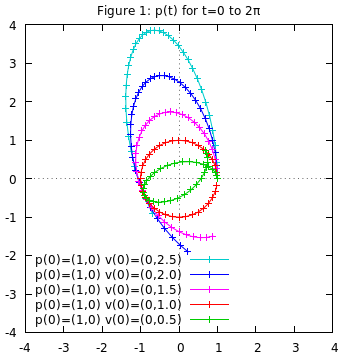 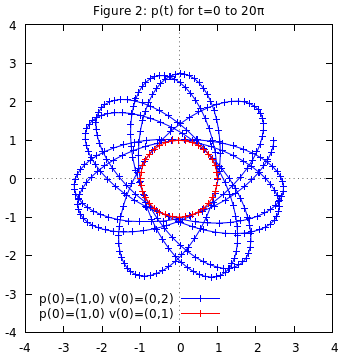 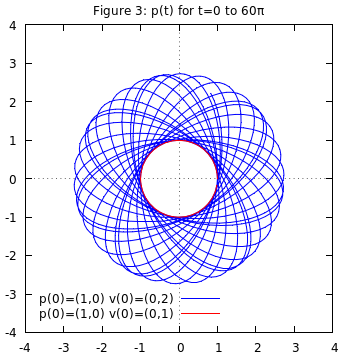 CLARIFICATION: I am ultimately interested in finding the simplest way of expressing $\mathbf{p}$ as a function of $t$. I.e. I really want to know "what this function looks like" rather than "what the curve looks like". Other parametrizations of the curve, and intuition about shape of the curve, are of interest only if they help lead to this answer.

UPDATE 2015/07/02:
It sure looks like a spirograph hypotrochoid, doesn't it? http://mathworld.wolfram.com/Spirograph.html .

Exploring this possibility, I found by binary search an initial velocity (0,1.662656) (probably accurate to only 4 decimal places or so) yielding a closed orbit in the shape of a 7-petalled flower, and then compared that sim result with the 7-petalled hypotrochoid having the same min and max radii; see Figure 4. 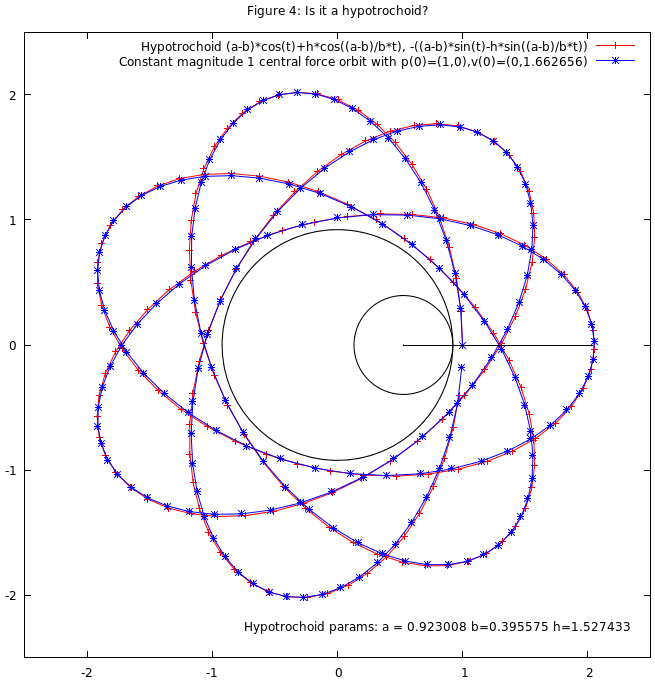 Conclusion: It's really close, but it's not a hypotrochoid. It moves too fast at the fast parts and too slow at the slow parts, and stays a bit too close to the origin during the in-between parts.

This is a nice question, and I don't have a comprehensive answer for you, but perhaps this will help a bit. For conservative forces, it's generally convenient to define the scalar potential $V$. The force will satisfy $\vec{F} = \vec{\nabla}V$, and your potential $V = r$ (yay, system is conservative). Since the kinetic + potential energy is constant, and $V$ is unbounded above, this means that the particle will always be in a bounded orbit around the body.

The orbits you've found are bounded, but not closed (on themselves), resulting in the flower-pattern trajectory. I do know that you only get closed orbits for potentials that are $\tfrac 1r$ (like ours), and $\tfrac 1{r^2}$ (where the force goes as $\tfrac{1}{r^3} \large)$, but I never really understood why (phase-space apparently).

Not the answer you're looking for? Browse other questions tagged ordinary-differential-equations physics plane-curves classical-mechanics or ask your own question.

0
Differential Equation - Falling Projectile - Help getting started?
4
Why $F(\mathbf q,\dot{\mathbf q},t)$ and not $F(\mathbf q,t)$?
1
Defining the Initial Conditions for a Planetary Motion to Have a Circular Orbit.
0
Central Force Problem
3
Is it really not possible to obtain an analytical expression for when (if at all) a point $Q$ on a rotating stick will hit a point $P$?
1
Finding the initial velocity vector to launch a projectile from one location to another? (Calculus-based classical mechanics)
2
Central force problem with relation to Kepler's law