What is the minimum degree of a polynomial for it to satisfy the following conditions?

This is the first part of a problem in the high-school exit exam of this year, in Italy. 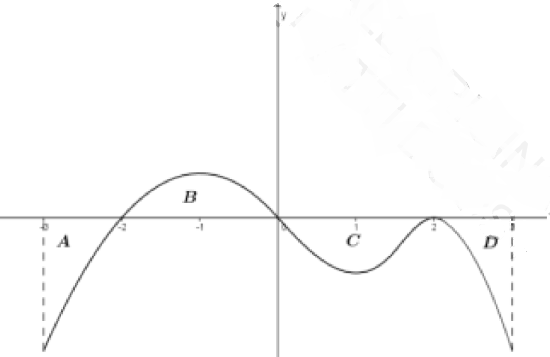 If $f(x)$ is a polynomial, what is its minimum degree?

Let me explain the issue with this. In fact, the question in bold is a reformulation of mine, while the original was

In case $f(x)$ were expressible with a polynomial, what could be its minimum degree?

The use of "could" has been criticized because in fact it does not exclude incorrect answers such as $0$. Then again, it is argued that such a lexical choice was due to the high difficulty (for a high-school student) of an answer to the more precise question "what is its minimum degree?", therefore "necessary, not sufficient, accessible and not trivial conditions have been provided." (there are several articles on the subject, in Italian) Nonetheless, there is an answer generally regarded as correct: $4$. Most students came up with that, and important websites provided it as well. Their reasoning is simple: since $f'(x)$ has $3$ zeros, its degree is at least $3$, and thus $f(x)$ is at least a quartic. However, it is also relatively simple, solving a system with enough of the information we are given, that the assumption $f(x)=a_4x^4+a_3x^3+a_2x^2+a_1x+a_0$ yields null coefficients. I personally didn't go further, but according to some articles I would have stopped at degree $9$, thus the answer to the question in bold; though this polynomial "in any case doesn't abide by $\Gamma$".

Here's my objection. It is clearly specified that $\Gamma$ is the plot of $f(x)$ in the considered interval, hence the minimum degree cannot be that of a polynomial which does not abide by it. The polynomial $P(x)$ must satisfy

Of course not knowing the exact coordinates of the inflection points is problematic, but in such an exam a strong resemblance would be enough.

With these constraints, is there really no hope? 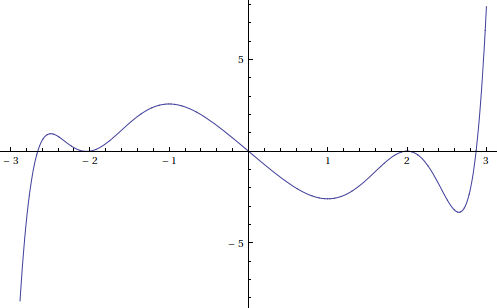 What an embarassing moment for the Italian mathematical instruction.

Not the answer you're looking for? Browse other questions tagged real-analysis derivatives polynomials definite-integrals or ask your own question.

6
What is the minimum degree of a polynomial, given the initial conditions?
5
Multitangent to a polynomial function
5
Polynomials bounded by $[-1, 1]$ iff argument is in $[-1, 1]$
5
Find a polynomial with integer coefficients which has a global minimum equal to (a)$- \sqrt{2}$, (b)$\sqrt{2}$
2
Maximum number of inflections of a polynomial division
1
Number of monic polynomials
2
$(x^3 + \frac{a}{x^2})^5 = -270$, find $a$
1
Find a parameter $m$ of a second order polynomial for which the polynomial is injective on a given interval.