What motivates this is the following example. The solution set of $\cos(x) - \cos(3x + 2y) = 0$ looks like two straight lines, and indeed we can determine the equations of those lines.

Can we do a similar thing for the first equation?

Indeed, by Taylor's development in 2D,

This development shows that in the vicinity of an ordinary point, a smooth surface usually behaves like a plane because the linear terms dominate, and isocurves are approximately straight lines.

But when the first derivatives are zero, the next order terms, the quadratic ones, enter into play and the behavior becomes that of a quadric. The isocurve $f(x,y)=F$ is approximately of the form

The closer you get to the extremum, the more you get an exact ellipse. The effect is more pronounced and the curves more symmetric when the third order derivatives are small. 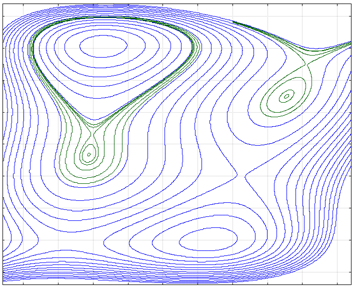 In the case of the given trigonometric function, translating the coordinates to $(\pi,-\pi)$, to bring a maximum at the origin, we get

Then the Taylor development up to fourth order yields

The plot below shows you the isocurve $z=0$ computed with the quadric (brownish) and quartic (pinkish) approximations; the latter is indistinguishable from the true curve, a quasi-ellipse. 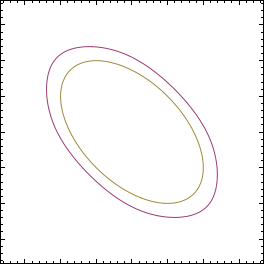 Using the sum-to-product formula for cosine

Wolfram Alpha doens't offer much simplification beyond this.

They are definitely not ellipses: 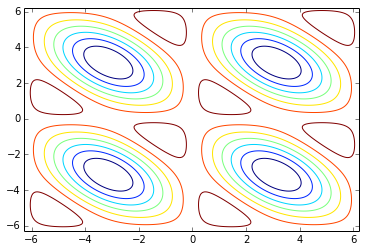 Alternatives plots from Wolfram Alpha. Somehow the level sets must interpolate between the "ellipses" and the "bow-ties". 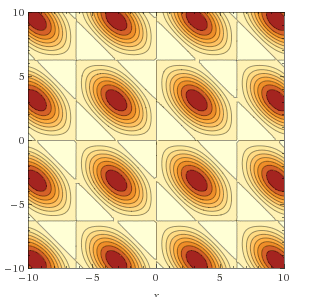 Using Demoivre identity $\cos \theta + i \sin \theta = e^{i\theta}$ we can instead consider the equation in complex numbers:

The set of points $(z,w) \in \mathbb{C}^2$ satisfying this equation is not an algebraic variety. The log of the norms are what is known as an amoeba. 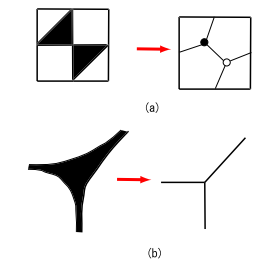 See What is an Amoeba in the Notices of the American Mathematical Society. Or the Master's thesis of Masahito Yamazaki Brane Tilings and their Applications 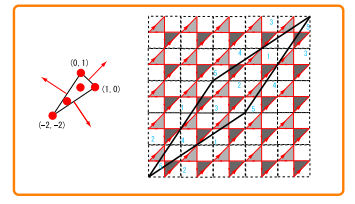 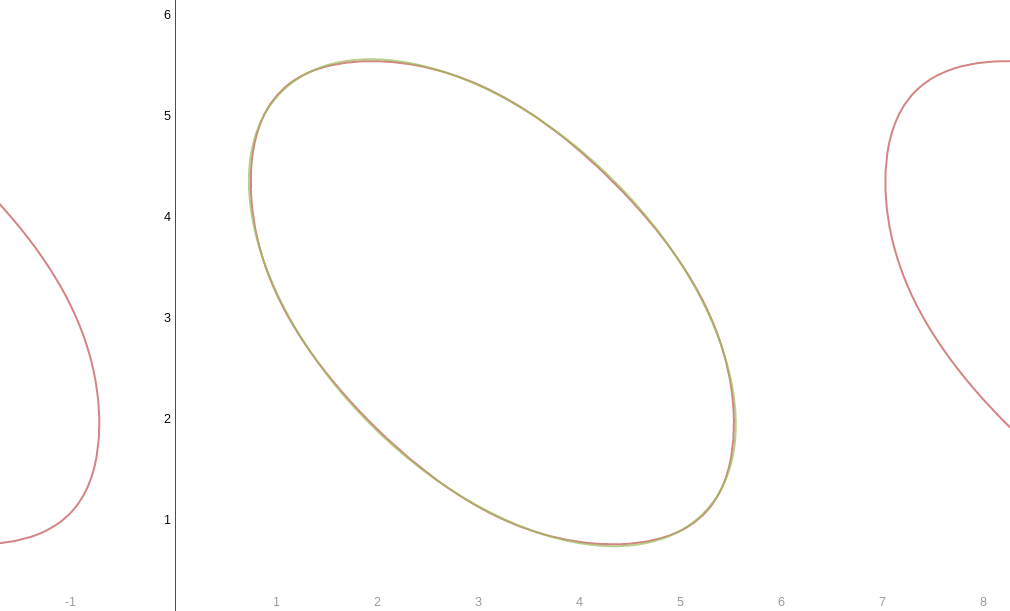 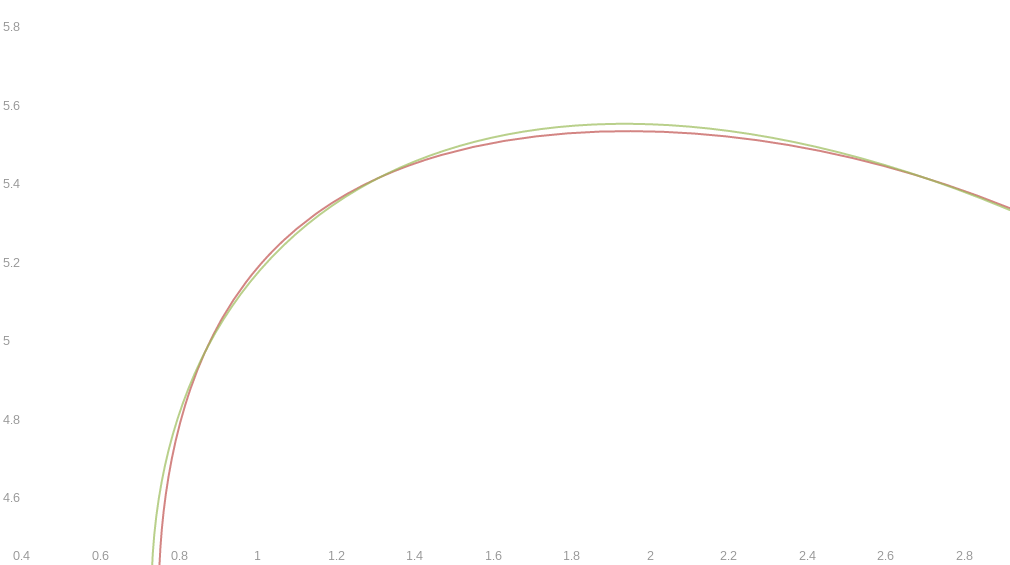 In fact, here is an animation showing the polynomial relations for $k=0$ to $k=20.$

The "ellipses" occur along the lines $y=\pm x.$

Also, as conjectured my @MathGemini in the above comments, your graph could be an agglomeration of cones in $(x,y,z),$ where $$z=\cos x+\cos y-\cos(x+y).$$ This is not the case, however because the surface you get is one of periodic maxima and minima, which is the expected behavior given by the equation. 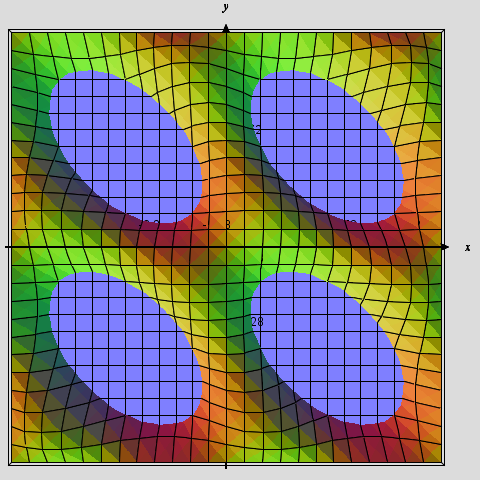 (This is the surface and its intersection with the $xy$ plane viewed from the positive $z-$axis.) 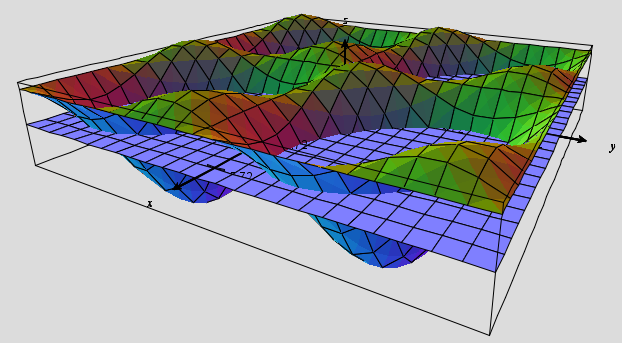 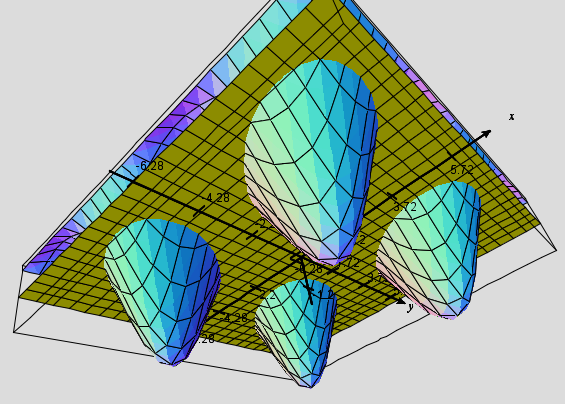 (This is the surface and its intersection with the $xy$ plane viewed from below the $xy-$plane.)

They are not ellipses. 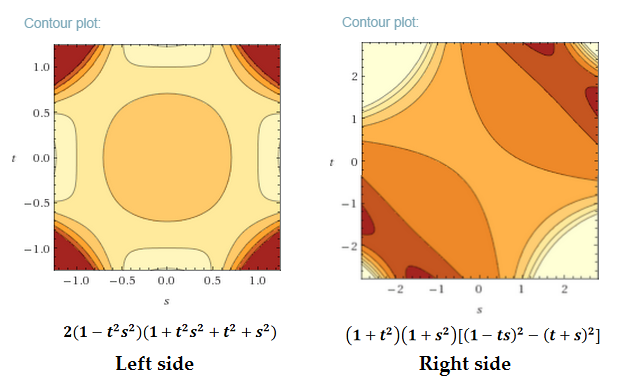 The contour is of a topography of hills and valleys.

Near to "Col" points ( flatter place to rest during mountaineering) between "ellipse" centers level curves more hyperbolic with saddle points.

At higher altitudes they are more elliptic and intersection ovals appear to be ellipses but indeed they are not so.

But the given curves are an infinite degree polynomial trigonometric array whose dimension cannot be two as it is for a conic section.

This fact alone justifies to its instant recognition to being other than a conic section.

attention to the hyperboloid side of contour as well.

the hyperbola look-like profile is ignored as, perhaps people look at the more round profile only. Different viewpoint centers are attached in the last illustration for level plots of $ \cos x + \cos y $.

As a relevant aside I can also mention..

$$ \cos a \cos b = \cos c , \cosh\, a \cosh \,b = \cosh \,c $$ which are non-linear Non-Euclidean generalizations to linear Euclidean geometry also have their smaller degree approximation leading to the Pythagoras:

So by this token supposing you had asked " Why does $ \cosh x + \cosh y = \cosh(x+y) $ look like a hyperbola? ", the discussion would run, imho along similar lines.

1
Least-squares ellipse fitting
4
Finding axis of ellipse described by $x=a\cos t+ h\sin t$,$ y=b\sin t + g\cos t$
10
Why does the Ellipsograph/Trammel of Archimedes draw an ellipse, really?
0
Ellipse tangent line intersection with lines $y=c$
0
Why does this trig equation have three solutions?
0
A Function That is a Vertical and Horizontal Hyperbola at the Same Time
1
Given an ellipse and a reference point, how to find the two lines that are tangent to the ellipse?
1
Find ellipse rotation angle and minor semi-axis by two points