Consensus division of a cake

There is a pie and two people with different tastes. The goal is to cut a piece, using two radial cuts like this: 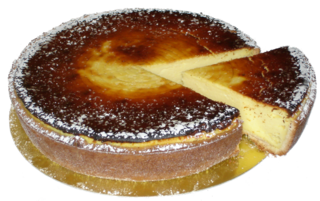 such that both people agree that the piece has a value of exactly a fraction $p$ of the total, where $p\in[0,1]$ is a given constant.

Substitute the order of integration and get:

Is it possible to generalize this argument to arbitrary continuous value measures?

EDIT: I just thought of an informal idea.

Let $N$ be a large integer. Normalize the value measures such that the value of the entire cake for each person is $N^2$.

Now, we have a discrete problem. We can imagine that in each arc, there are $V_A$ Azure balls and $V_B$ Black balls.

At each step, count the number of Black balls between the knives, and sum over the entire round-trip. Each black ball is counted whenever there are between 1 and $p N^2$ azure balls before it. Hence, it is counted exactly $p N^2$ times. Hence, the sum of the counts over the entire trip is $p N^4$. This is a fraction $p$ of the product of the total number of balls.

There, $p N^2 = 5$. The green arc is the arc between the knives. You can increase $t$ and see that the green arc always covers exactly 5 azure balls, and each black ball is covered exactly 5 times.

When $N$ is sufficiently large, the sum becomes an integral, and by continuity, the integral of the $V_B$ is $p$.

Hence, by the Mean Value Theorem, there is a point in the trip in which $V_B=p$.

Can this idea be made formal?

By assumption, the two functions $V_A$ and $V_B$ are continuous and monotonically increasing (but not necessarily strictly). Since $x \mapsto V_\ast(x) - x$ is continuous and has period $1$, $V_\ast$ is uniformly continuous.

But on the other hand we have

Not the answer you're looking for? Browse other questions tagged real-analysis measure-theory fair-division or ask your own question.

5
Cutting the Cake Problem
7
Natural & important probability measures on $\mathcal{C}[0,1]$, in particular the Wiener measure
4
Cutting a pie with a fork
2
Regularity of $\phi$ in order that $\int g_h \phi \,dx \to \phi(0)$
1
A subset on which a measure is strictly positive
3
Envy-free cake division. What else possible?
1
Understanding Austin's two moving knives procedure for cutting a cake fairly
4
variation of Vitali in $\mathbb{R}^2$