Consider a turn-based game for 2 players. They're both playing on the same board. The board is 8x8, randomly generated and each cell has 0 or 1 (with equal probabilities), for example:

You win when after your move there are only 0 on board.

My question is: what is the optimal strategy for this game?

Lights Out description on MathWorld is worth reading.

Presented game is a variation of Lights Out, but instead of flipping 4 neighbor cells, we flip only 2 and we can move only in cells with 1. It's also similar to Nim.

In the same way like MathWorld describes we can find $S$ - a minimum set of moves to win. For 8x8 board there will be always exactly one solution.

Since matrix addition is commutative, the order in which the moves are performed is irrelevant.

By trying some examples I find out that opponent move not from $S$ increases our $S$ by 1 move - exactly the move he made. So, we get back the board with 3 (different) moves in $S$. But, he can't stop us like this forever - finally all his possible moves will be in $S$.

So, if all of above is true, it means that players have no influence on the result of the game. We could even play by random and if the initial $|S|$ was odd - we will win, if it was even - we will lose.

It's hard for me to believe in that. What will be the sense of making AI challenge on HackerRank with such a game? Players in the leader-board have different scores and these scores are consistent each time after recalculation (same people in the top 10), suggesting that players actually have an influence on the game result.

Maybe you can see some mistake I'm making?

Recursively color the board in white and black such that for any legal move, there is an odd number of black squares that are flipped.

In your case the coloring will look like an inverted serpinski pattern shifted diagonally : 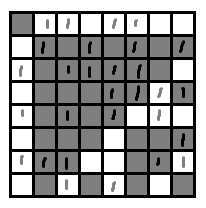 I don't know what your website is doing. If some algorithms win more than others then either the rules are different (he never says what happens on the edges of the board) or he has an unfair way of generating random boards. Also I don't know what he does when he recalculates the scores. Maybe this is just an experiment in feeding random results to an elo scoreboard.

let's take a simple 1x3 board

This is a loss for player 1.

But the loss is faster if the cell on the left is chosen first.

Since there is a move limit, the losing play can squeeze out a draw by stalling as much as possible.

The winning player, when possible needs to make a move that can't be undone.

Let's try a simple board where player 1 wins.

player 2 then can't take left or right, which lets player 1 win on move 3.

instead, player 2 will take the middle, which recreates the same situation as if player 1 had started with the right.

So now we have the strategy.

if you were playing alone, the order would not matter for the required moves. but since you are competing, the important thing to do is permanently remove as many chances for the opponent to extend the game as you can.

Not the answer you're looking for? Browse other questions tagged linear-algebra puzzle game-theory combinatorial-game-theory or ask your own question.