Proving that a compact subset of a Hausdorff space is closed

I am having trouble understanding the answers here.

I am trying to prove that a compact subset of a Hausdorff space is closed.

Following the proof is difficult, perhaps because Brian reused letters for different things(although I get they are arbitrary, I can't follow it.) The second answer uses nets and filters, which I don't know of, so would like to avoid for now.

To show that this subspace is closed, we can show the complement of the subspace is open. I.e. $S/C$ is open. Now following the proof of Brian, we take some element $x\in S/C$ and since $S$ is Hausdorff(which means $C$ is Hausdorff), we have for each $y\in C$ that there are disjoint open sets $U_y,V_y$ such that $x\in U_y$ and $y\in V_y$ now here is a little confusing, either he has reused $x$, or for some reason $x\in C$, which shouldn't be possible, since $x\in S/C$. Let's assume this is reusing the letter. Then the collection of all of these disjoint open sets, lets call it $\{\alpha_i,i\in C\}$ is an open cover of $C$, and since $C$ is compact, it has a finite subcover, $\{\alpha_i|u\in F\}$ where $F$ is a finite subset of $C$. Let $$U=\bigcap_{x\in F}V_y=\emptyset$$ Right? So then $U$ is open, since all empty sets are open... Now the proof doesn't even seem to follow.

I have no idea what's going on!

Here’s a sketch that may help a little. 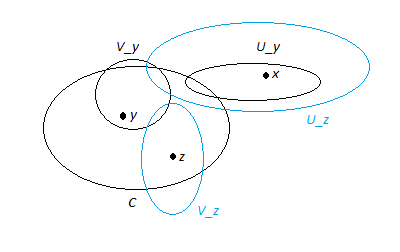 The large black oval represents the compact set $C$, $x$ is the point outside $C$, and $y$ and $z$ are two points of $C$ that I’ll use to illustrate the choice of open nbhds. The space is Hausdorff, so $x$ and $y$ have disjoint open nbhds; in the picture they’re the smaller black ovals, $V_y$ being the nbhd of $y$, and $U_y$ the corresponding nbhd of $x$. Similarly, $x$ and $z$ have disjoint open nbhds; I’ve drawn them in blue, $V_z$ being the nbhd of $z$, and $U_z$ being the corresponding nbhd of $x$.

since $U$ is an intersection of only finitely many open sets, $U$ is also open. I claim that $U\cap C=\varnothing$. Suppose, on the contrary, that there is a point $y\in U\cap C$. We saw above that

Alternative write up to Brian's(as interpreted from Brian's write up):

Not the answer you're looking for? Browse other questions tagged general-topology functional-analysis or ask your own question.

27
How to prove that a compact set in a Hausdorff topological space is closed?
1
Proof for Urysohn's lemma.