What is the smallest unknown natural number?

There are several unknown numbers in mathematics, such as optimal constants in some inequalities. Often it is enough to some estimates for these numbers from above and below, but finding the exact values is also interesting. There are situations where such unknown numbers are necessarily natural numbers, for example in Ramsey theory. For example, we know that there is a smallest integer $n$ such that any graph with $n$ vertices contains a complete or an independent subgraph of 10 vertices, but we don't know the exact value of $n$.

What kinds of unknown small (less than 100, say) integers are there? What are the smallest unknown constants which are known to be integers? Or, more rigorously, what is the smallest upper bound for an unknown but definable number that is known to be an integer?

I know that asking for the smallest unknown integer is ill-defined since we do not know the exact values. The more rigorous version of the question is well-posed, but I do not want to keep anyone from offering interesting examples even if they are clearly not going to win the race for the lowest upper bound.

An answer should contain a definition of an integer quantity (or a family of them) and known lower and upper bounds (both of which should be integers, not infinite). Conjectures about the actual value are also welcome. I have given one example below to give an idea of what I'm looking for.

is unknown as of now. Most likely, it is $2$, but the twin prime conjecture has not yet been settled.

What is the minimum number of colors needed to color the plane such that no two points separated by a distance of exactly $1$ are assigned the same color?

The coloring below, due to John Isbell, shows that $\chi \le 7$:

(Image from mathpuzzle.com. The circles shown have unit radius.)

And the 4-colorability of the unit-distance graph, the Moser Spindle, shows that $\chi \ge 4$: 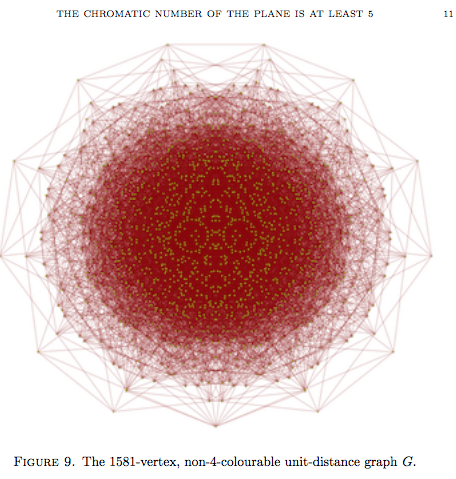 How about the concrete problem of understanding how many (non-intersecting) spheres can touch another sphere in low dimensions? This is known as the kissing number problem, and it is open in dimension $5$.

In dimension $2$, the kissing number is $6$, given by the hexagonal tiling of the plane:

As for dimension $5$, all that is known is that it is at least $40$ and at most $44$. In fact the only other dimensions for which we know the value of the kissing number problem are $8$ and $24$, and this is due to the extraordinary symmetries of the $E_8$ and Leech lattices.

Ramsey numbers give the smallest sizes of graphs that ensure that certain kinds of subgroups of a given size can always be found. More specifically, $R(k,l)$ is the smallest integer such that any graph with at least so many vertices contains a complete subgraph of $k$ vertices or an independent subgraph of $l$ vertices.

Some small values are known, but there are surprisingly small unknown ones. For example:

The Electronic Journal of Combinatorics has a dynamical survey of small Ramsey numbers which you can consult for more details and newest bounds.

1 At the time of writing this answer the limit was $49$. Vigleik Angeltveit and Brendan D. McKay released a preprint on March 26, 2017, proving $R(5,5)\leq 48$. The value has been updated in the dynamical survey as well. If there are changes to the relevant numbers in the survey, feel free to edit. (Other sources for updates can also be mentioned, but I will restrict the listed numbers to the values of the survey for consistence.)

Find the smallest $n$ such that every number $k\geq3n$ with the same parity as $n$ can be written as the sum of $n$ odd primes.

Of course, this question is well out of reach of ZFC, and certainly not about finite objects. However, Saharon Shelah showed that we can prove certain restrictions on this (and other) exponential quantities. In particular, he showed $$\text{If $2^{\aleph_k}<\aleph_\omega$ for every $k\in\omega$, then $2^{\aleph_\omega}<\aleph_{\omega_4}$.}$$

So far as I know the "4" is not known to be optimal, nor is there a good reason to believe it is apart from our inability to do better; see section 2 of Chapter IX of Shelah's book Cardinal Arithmetic, colorfully titled "Why the hell is it four?"

This may seem like a curiosity, but I think that computing this number - in particular, proving optimality, and reducing from 4 to something smaller if that's possible - would require fundamental advances in set theory.

Here, $\text{collatz}(x)$ for $x \in \mathbb{N}$ is defined as the set of generated numbers in the $3x + 1$-sequence in the Collatz conjecture when started from $x$.

The value of $G(3)$ in the Waring's problem, or the upper bound to the number of cubes that are necessary to write a sufficiently large number.

Progress to this problem:

What are the solutions to

What is the ninth solitary number?

One can easily check $F_0\to F_4$ are all primes. In history, it was conjectured that all these were prime. However, computational data shows that $F_5\to F_{30}$ are composite. Now it is conjectured that only the first $5$ are prime.

Elliptic curves over $\mathbb Q$ of rank at least 28 are known, but their exact rank is not known.

The number $\pi$ has a very significant history and could be the ideal object of many problems about the first position in its decimal expansion in which a given property occurs:

In what position the following property occurs first?

3) the first square of ten digits

4) Nothing is known about which digit appears countless times however it is clear that at least one digit does. What is this digit?

Many other similar questions can be formulated. Note that, excepting 4), it is not obvious that there are corresponding answers but it is obvious also that their probability of existence is nonzero. A way to be sure of the existence of an answer is as follows:

gives the value of any position in the expansion of $\pi$ so one can looking for some interesting property in an advanced position and ask about the minimal position at which this occurs (it can be the discovered position, of course).

Not the answer you're looking for? Browse other questions tagged elementary-number-theory discrete-mathematics math-history big-list integers or ask your own question.

2
Are there sets $S\subseteq\Bbb N$ which are provably non-empty, but we don't know what is $\min S$?
86
What is a simple example of an unprovable statement?
109
What is the smallest number of $45^\circ-60^\circ-75^\circ$ triangles that a square can be divided into?
15
Is there a property in $\mathbb{N}$ that we know some number must satisfy but don't know which one?
23
Are there any infinite sets that are not known to be either countable or uncountable?
1
Finding the X largest positive and negative variables in any given algebraic expression