I am looking into knot theory and have found two different definitions stating that two knots $K_1$ and $K_2$ are equivalent, namely the concept of an ambient isotopy:

I guess these definitions are not identical and I suppose this has something to do with orientations of your knots. However I find it a bit hard to get my head around it. So I hoped someone could either prove I'm right by giving a counterexample or prove I'm wrong (ie. prove these concept are identical)

I'll be working in $S^3$ for this answer, as it is generally the more convenient place to do knot theory. It does not cause problems: just extend your homeomorphisms to be homeomorphisms of $S^3$, for instance.

These are not identical, but they almost are. In particular, the reverse of a knot need not be isotopic to it, but you can just reflect along a hyperplane to get a homeomorphism.

There is one other common definition of equivalence for knots: isotopy of embeddings.

A knot is an embedding $S^1 \to S^3$. An isotopy between two embeddings $f_0, f_1$ is a map $f_t: S^1 \times [0,1] \to S^3$ such that each $f_t$ is an embedding. This turns out to not be the correct notion of equivalence for knots - it would force all tame knots to be equivalent! What one does to fix this is either demand that the isotopy be smooth, or that it be locally flat. (See this page again for details on being locally flat.)

Now this is precisely the hypothesis we need to use the isotopy extension theorem: so any (locally flat/smooth) isotopy of embeddings automatically lifts to an ambient isotopy, giving us something equivalent to the standard definition.

This is trivial for $n=0$. Inductively assume it's trivial for $n-1$. Pick an orientation-preserving homeomorphism $f$; $f(S^{n-1})$ bounds a ball on both sides. Isotope $f$ so that $f(S^{n-1})$ does not include the poles. Pick a standard 'longitude sphere' $S^{n-1}$s (the level sets of the height function of $S^n \subset \mathbb R^{n+1}$) that lie inside one of the balls that $f(S^{n-1})$ bounds (this is possible by compactness of $S^{n-1}$ and continuity of the height function). By the annulus theorem there is a locally flat isotopy of embeddings from $f(S^{n-1})$ to this longitude sphere; then there is an isotopy from this longitude sphere to the equator $S^{n-1}$. Using the isotopy extension theorem $f$ then is isotopic to an orientation-preserving homeomorphism that preserves the equator; we can also assume that it sends the north hemisphere to the north hemisphere. This new $f'$ restricts to an orientation-preserving map on $S^{n-1}$; this restriction is isotopic to the identity; use isotopy extension. So $f'$ is isotopic to $f''$ that preserves $S^{n-1}$ pointwise. $f''$ is the union of two homeomorphisms of $D^n$ (the northern and southern hemispheres), identity on the boundary, along their boundary; the Alexander trick shows that these are isotopic to the identity. So we have produced an isotopy of $f$ to the identity as desired.

In the case we care about - $n=3$ - the only hard result we used is the annulus theorem in dimension 3, which is reasonably elementary.

Milnor's Topology from the Differentiable Viewpoint (page 34) has a very elementary proof: 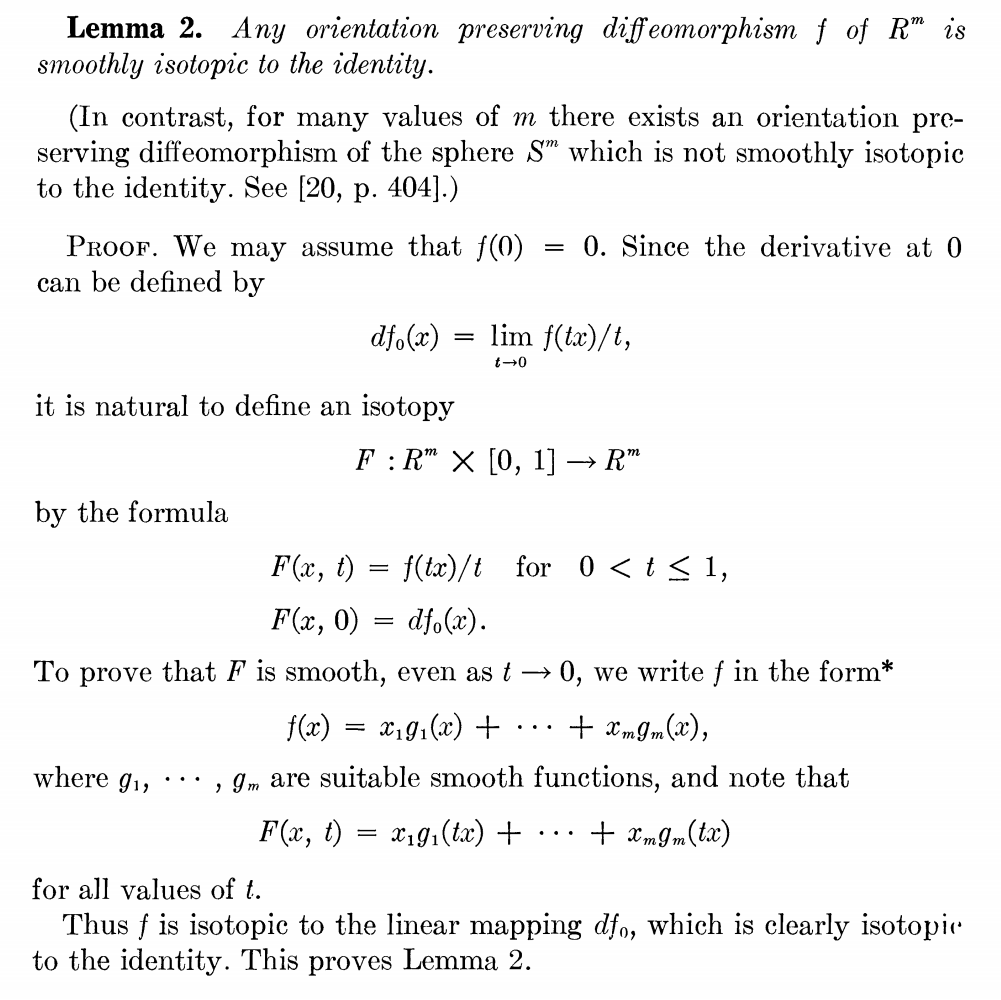 Filling in the blanks:

Not the answer you're looking for? Browse other questions tagged algebraic-topology geometric-topology knot-theory or ask your own question.

4
Which two knots are isotopic but not ambient isotopic?
2
Equivalence of two definitions of a knot
1
Isotopy between homeomorphisms of open balls
1
Ambient Isotopy of Knots
1
Definition of equivalence of knots
1
Why is ambient isotopy the preferred invariant of knots as opposed to isotopy?