I just learned a tiny bit about SIA. While it is interesting, that it handles derivatives so easily, I wonder:

Can we still recover the concepts of limits (of sequences) and especially series, to make statements like:

and so on and so forth? I didn't find anything about this.

Stanford Encyclopedia of Philosophy discusses Smooth Infinitesimal Analysis (using nilpotent $\epsilon^n = 0$, not just $\epsilon^2 = 0$ as in the above discussion) in contrast to non-standard analysis (using hyperreals). In fact, SIA is very close to how Theoretical Physicists manipulate infinitesimal quantities, to the accuracy they desire.

Depending on how much details you want, the construction of these infinitesimals involves sheaves and toposes, and the principle of microaffineness.

We observe that the postulates of smooth infinitesimal analysis are incompatible with the law of excluded middle of classical logic.

This [blog] uses infinitesimals but they only go to second order $dx^2 = 0$. Introductory books on Calculus have been written using both approaches:

For more advanced reading, some students have wrtten Master's Theses ont he topic:

Therefore we can show the derivative of the exponential function is itself in SIA and expand:

In general, this seems to be a way of obtaining infinite series as the Taylor series expansion and there is duality between $\epsilon \leftrightarrow n$.

COMMENT Upon further investigation, there doesn't seem to be any analogue of the Mean Value Theorem or Intermediate Value Theorem (which is provable in nonstandard-analysis). So in theory we can't prove:

This result breaks down in SIA - related to the Law of Excluded Middle. The Mean Value Theorem and (global) Taylor's Theorem seems to enjoy similar fates.

While we can take deritives (and integrals!) there doesn't seem to be any way to connect local and global information in the smooth world $\mathbb{S}$.

In our cases $f(x) = \frac{1}{x}$ but how to we know the integral test works in SIA? What is an integral? Bell's Primer of Infinitesimal Calculus defines $\mathbf{\color{blue}{\int}}$ rather obliquely as the "area under the curve" but now you're done. 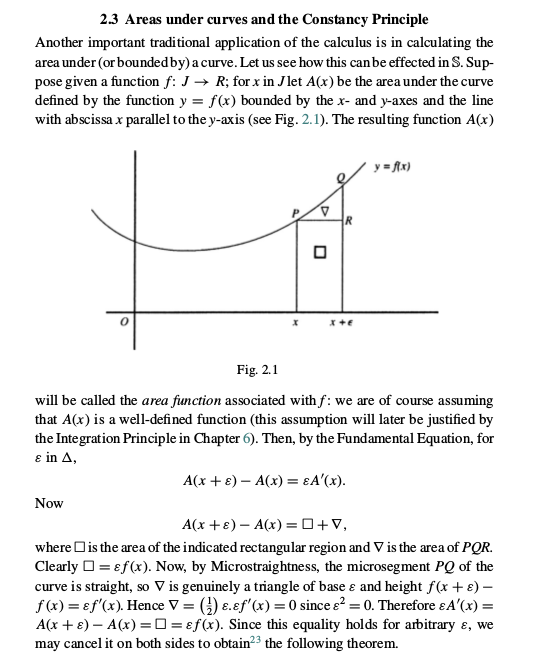 Not the answer you're looking for? Browse other questions tagged real-analysis limits convergence-divergence nonstandard-analysis constructive-mathematics or ask your own question.

9
A layman's motivation for non-standard analysis and generalised limits
1
convergence of a series..
2
Evaluating the integral of a Fourier Series
5
Nested logarithm series
2
Convergence of a series using Cauchy Condensation Theorem
2
Trouble with trigonometric limits without derivatives