What is the precise mathematical definition of what a wavelet is and what is its relation to linear algebra?

I was reading on wavelets and it seems that its hard to find a precise mathematical definition of what this concept is. My confusion first arose due to Gilbert Stang's linear algebra book. In particular consider the following extract: 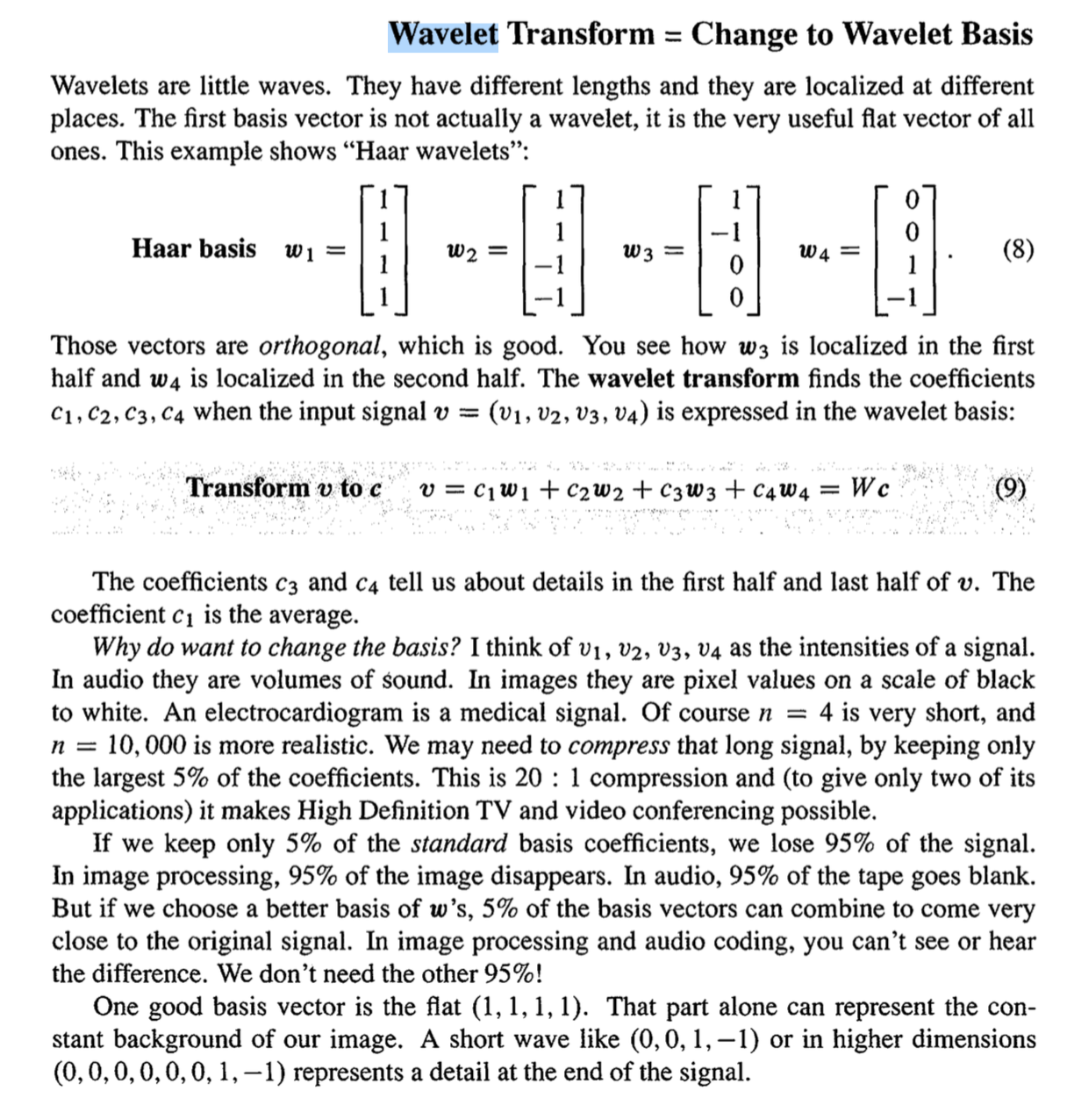 It talks about how to change a vector from one basis to another but it never rigorously defines what a wavelet is (by the way, I did understand that extract I included, just not the concept of "wavelet"). From my understanding, some special basis are called wavelets (for some special reason). But which basis are we allowed to call wavelets? I would assume that they have something to do with linear algebra and oscillation/sinusoidal functions but I don't really see what the relation between the two is.

To look for an alternative explanation I went to wikipedia and the initial paragraph starts as follows:

A wavelet is a wave-like oscillation with an amplitude that begins at zero, increases, and then decreases back to zero. It can typically be visualized as a "brief oscillation" like one might see recorded by a seismograph or heart monitor. Generally, wavelets are purposefully crafted to have specific properties that make them useful for signal processing. Wavelets can be combined, using a "reverse, shift, multiply and integrate" technique called convolution, with portions of a known signal to extract information from the unknown signal.

With that description it makes me feel that wavelets are actually functions. However, I've had difficulty understanding this precisely, specially when trying to relate it to linear algebra. I guess I am having a hard time connecting the three, wavelets, linear algebra and their relations to sinusoidal functions (if there is any relation to them).

The idea being discussed doesn't need a rigorous definition of wavelet, or even to use wavelets at all; the notion of a wavelet is, I think, mainly a clever way of generating a convenient basis in a systematic fashion starting from a basic shape. (the particular basis you listed could probably stand to be scaled so as to be orthonormal basis rather than just an orthogonal basis)

Properties of wavelet: Wavelets have localized property w.r.t both frequency and space variable. It oscillates depending its vanishing moment.

The local frequency of such oscillating signal are measured from the wavelet transform(continuous). But here the discrete wavelet transform is used. You can use https://en.wikipedia.org/wiki/Discrete_wavelet_transform. Thank you for the question.

The DFT has global self-similarity properties. That is what allows for the FFT factorizations. However each factor in the FFT spreads to affect the whole signal space.

To derive a DWT is to find or build a family of functions which have local self-similarity properties to allow for a similar factorization which spreads more locally over the signal space.

Not the answer you're looking for? Browse other questions tagged linear-algebra functional-analysis functions fourier-analysis wavelets or ask your own question.

11
Textbook that brings together linear algebra and PDEs?
8
Relationship between dual space and adjoint of a linear operator
1
Output of wavelet transforms
4
Linear algebra explanation of wavelet transform
8
Why invariance to change of basis is so important in linear algebra?
2
Fundamental theorem of linear algebra
2
Need to learn wavelet, suggest steps and resources
1
Completeness, spanning and orthonormal bases
3
Moore-Penrose pseudoinverse and Linear relations
3
Why do non-orthogonal basis functions encode 'redundant' information in transforms?