The notion of Fourier transform was always a little bit mysterious to me and recently I was introduced to functional analysis. I am a beginner in this field but still I am almost seeing that the Fourier transform can be viewed as a change of basis in a space of functions. I read the following article here which tries to build an intuition:

Now, I can see that the Fourier and Inverse Fourier tranforms are projecting and projecting back a function $f(x)$ onto and from the basis of complex exponentials, $e^{i2\pi sx}$, respectively: $$ F(s) = \int_{-\infty}^{\infty}f(x)e^{-i2\pi sx}dx$$

Here are my questions about this view to make it more clear:

1)If I understand correctly, this operation is akin to regular linear algebra change of basis operations $a=Mb$ and $b=M^{-1}a$. Roughly, in this case $M$ is a matrix of uncountable many rows and columns where each row is $e^{-i2\pi sx}$, a function of $x$, and similarly $M^{-1}$ has rows as $e^{i2\pi sx}$, functions of $s$. Is this interpretation correct?

2)I don't have the exact rigour for this but intuitively think, if 1) is a correct interpretation then we should obtain from the "infinite dimensional" matrix multiplication $MM^{-1}$ something which resembles an infinite dimensional identity matrix. To test that, I built the inner product where $s$ is held fixed and equal in both terms from two objects $M$ and $M^{-1}$, which should correspond to a "diagonal" element of $MM^{-1}$: $\int_{-\infty}^{\infty}e^{i2\pi sx}e^{-i2\pi sx}dx = \int_{-\infty}^{\infty}e^{0}dx=\infty$. So this is not $1$ as expected from an identity matrix. What is the reason of that?

You can imagine derivative as a matrix such as this, as the corresponding values of each element approach zero (limit definition): 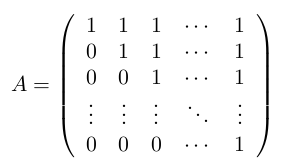 You need extend this matrix to infinity and shrink the corresponding interval to zero (riemann sum) to get the continuous transform.

Think of this as summing up all the ones in the diagonal. The diagonal components have the value 1, they correspond to an infinitesimal interval (dx) and when you sum infinitely many of them you get infinity.

Alternatively think about what would happen if you multiplied the derivative matrix and the integral matrix. You would get the identity matrix. By integrating you would be summing the ones on the diagonal.

Not the answer you're looking for? Browse other questions tagged linear-algebra functional-analysis fourier-analysis or ask your own question.

15
Is there a notion of a continuous basis of a Banach space?
3
Fourier Transform Motivation/Derivation