Are the coefficients of a vector according to a basis unique?

Here is an alternative approach based on the existence and uniqueness of the matrix inverse for square matrices with full column rank. It is slightly circular in the sense that proofs of the existence and uniqueness of this matrix inverse usually use arguments similar to the other answers here. However, hopefully this approach will provide some intuition about the meaning of changing from one basis to another.

The operation of taking a vector of coefficients and building a linear combination of vectors from it is a linear operation. In particular, it is equivalent to multiplying the coefficient vector with a matrix where the basis vectors are stacked in each column, $$\underbrace{\sum_{i=1}^n \alpha_i v_i}_{l} = \underbrace{\begin{bmatrix}v_1 & v_2 & \dots & v_n\end{bmatrix}}_{P}\underbrace{\begin{bmatrix}\alpha_1 \\ \alpha_2 \\ \vdots \\ \alpha_n \end{bmatrix}}_{\alpha}.$$ More generically, $$l = P \alpha,$$ where $l$ is the linear combination, $P$ is the matrix of basis vectors, and $\alpha$ is the vector of coefficients. If the basis vectors are linearly independent, then $P$ is invertible, so the only possible map going the other direction is given by $P^{-1}$; $$\alpha = P^{-1} l.$$

There can't be other inverse maps by the uniqueness of matrix inverses, which is the desired result. 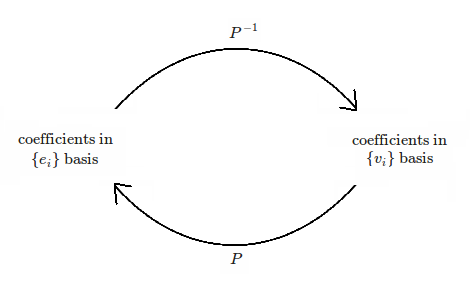 They are unique. Think about what happens if they aren't and you subtract two different representations from each other.

3
$(\beta_1 \otimes \beta_2)(\alpha_1 \otimes \alpha_2)=(\beta_1 \alpha_1)\otimes(\beta_2 \alpha_2)$
1
Let $V$ be a vector space and let $\{ \alpha_1 ,\alpha_2, ..., \alpha_n \}$ be a basis of $V$
3
Show that for special linear maps there is only one sequence of invariant subspaces
0
Understanding a proof of propositon of linearly independent.
3
Proof of an Elementary Result on the basis of A Vector Space
3
Proving Statement about Independent Sets and Spans
2
Can I use an infinite basis to prove a statement on a non-finite dimensional vector space?
0
How to find the basis of intersection of subspaces $V$ and $W$?