It is well known that when two tangents to a parabola are perpendicular to each other, they intersect on the directrix. In other words, the intersection point of the two tangents make a straight line, in this case, the directrix,

And surprisingly, the hyperbola has the same focus with the parabola.

This can be proven by brute-force algebra, with the same method used to prove the directrix property.

The question I'd like to ask is : Is there a geometric, or maybe an intuitive proof to why the trace of the intersection point forms a hyperbola, and why the focus of the hyperobla and parabola are the same?

It can't be a coincidence that these two conic sections have the same focus, and I assumed that there would be a simple geometric observation that can be made to prove this property without algebra, as many other properties of the conic sections do, but I just can't seem to find it. My math teachers also seem to be stumped with this problem.

Can anyone give me help? I couldn't find any proof regarding this property on google either.

(Sorry for my bad English; it is my first time writing mathematical topics in English, please correct me if anything is wrong)

I've been thinking about your problem for a while. I wouldn't say that I could solve it. However, I have an idea that I would like to share with you.

You certainly remember the Dandelin spheres which may have something to do with your conjecture. The following figure depicts two cones (a black one and a grey one). These cones share the vertical axis and a Dandelin sphere. Tangent to this sphere there is a blue plane whose edge can be seen in the figure: 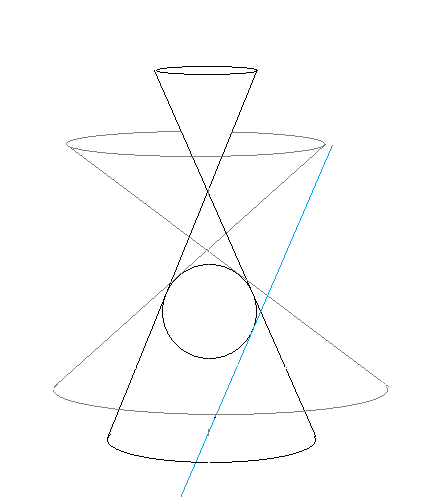 The blue plane and the black cone intersect in a parabola. Also, the blue plane intersects with the other cone in a hyperbola. The parabola's focus and one of the foci of the hyperbola are common.

My conjecture is that this is how to imagine your couple of parabola and hyperbola with a common focus.

Then, I don't know how to proceed.

Here a proof of a generalization of your statement in term of synthetic projective geometry.

Let $\Gamma$ be a conic in a plane $\alpha$ and let $\Pi$ be a projectivity of $\Gamma$ onto itself with axis $p$ and center $P$ not contained in $p$. Then the locus of points of the intersections of the $\Pi$-corrispondent tangents of $\Gamma$ is a conic $\Psi$. Moreover $\Gamma$ and $\Psi$ induces the same involution on $p$.

We identify a conic with its associated polarity in the plane. Recall that a conic $\Gamma$ induces on a line $p$, not tangent to it, an involution which maps each point of p into the intersection of its polar with $p$. 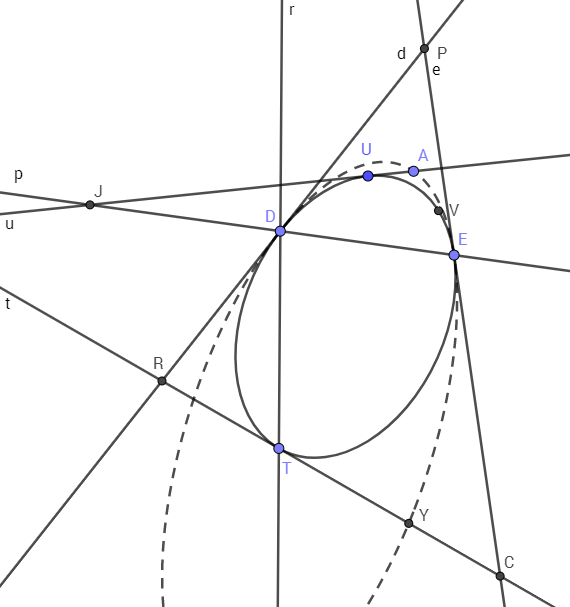 Finally we deduce your statement from this. Let $\Gamma$ be a parabola, $p$ be its directrix and $P$ it focus. A non-involutory projectivity $\Pi$ of $\Gamma$ into itself with center $P$ and axis $p$ induces on the line at infinity a non-involutory projectivity which commutes with the absolute involution, that's a direct congruence; consequently, $\Pi$ rotate each tangent line by the same angle. Then $\Pi$ maps $\Gamma$ into a conic $\Psi$ which induces on $p$ (and $P$) the same involution as $\Gamma$, that's the right-angle involution. This proves that $\Psi$ has focus $P$ and directix $p$ as well. In order to show that $\Psi$ is an hyperbola, it's enough to prove that the line at infinity $w$ is secant $\Psi$. But this follows at once by noting that the point at infinity of the line $\Pi(w)$ belongs to $\Psi$ and it's no a contact point.

Now let's say a point $C$ lies outside a parabola with focus $F$, so the two tangents from $C$ to the parabola meet at an angle of $\theta$.

As shown in the diagram, let $A$ and $B$ be the points of tangency, and let $P_A$, $P_B$, and $P_C$ be the projections of these points onto the directrix. 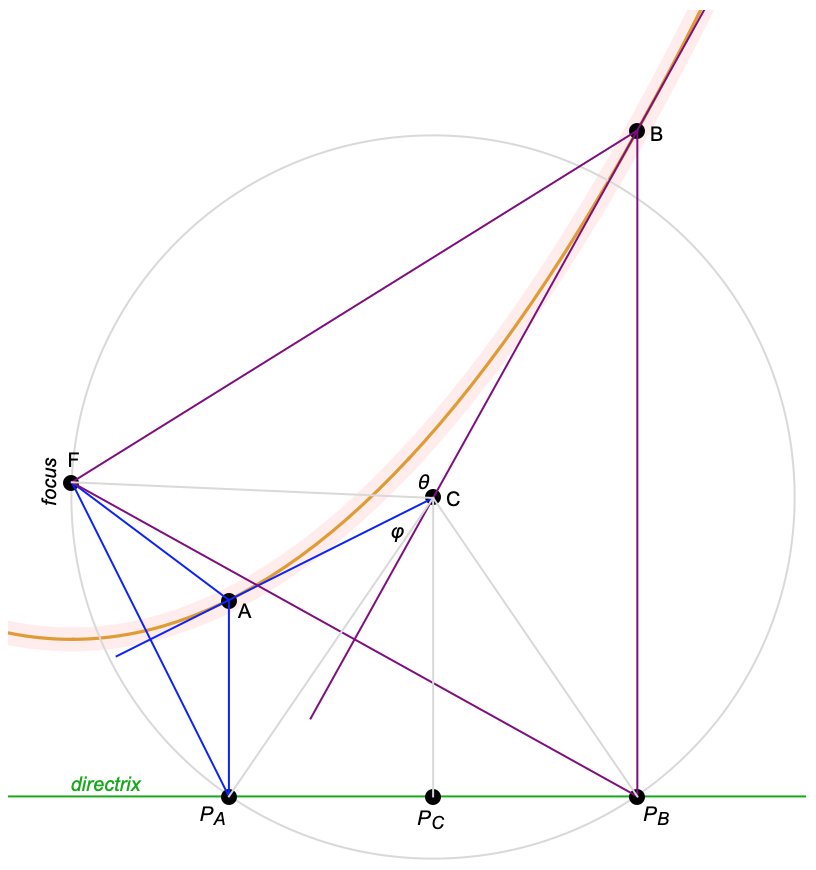 Looking at tangent point $A$, we see that since it lies on the parabola, it is equidistant from the focus $F$ and from the directrix, so triangle $FAP_A$ is isosceles.

Furthermore, this triangle is cut in half by the line of tangency, $AC$, because it bisects angle $FAP_A$. (This is the same angle property as the "radio dish" property: The line $FA$, reflected off the tangent at $A$, is reflected straight upwards.) So $AC$ is the perpendicular bisector of $FP_A$. So $CF=CP_A$.

Similarly, $BC$ is the perpendicular bisector of $FP_B$, and $CF=CP_B$.

Thus $C$ lies on the hyperbola having the same focus and directrix as the parabola, but having eccentricity $\frac{1}{\cos(\varphi)} = \frac{-1}{\cos(\theta)}$.

3
Focus of parabola with two tangents
0
Finding equation of parabola when focus and equations of two perpendicular tangents from any two points on the parabola are given
4
Is there a name for this quantity which is similar to the focus of a parabola?
5
A right angle at the focus of a hyperbola
2
Prove that a triangle with given base and height, formed by the tangent of a parabola, shares an angle with a given right triangle.
1
Tangents to parabola $y^{2}=4ax$ meet hyperbola $x^2/a^2-y^2/b^2=1$ at $A$ and $B$. Find the locus of intersections of the tangents at $A$ and $B$.
2
A variable parabola touches the $x$-axis and $y$-axis at $A(1,0)$ and $B(0,1)$. Find the locus of its focus.
0
Synthetic geometry of conic sections
3
Relation of the length of latus rectum with the distance between focus and vertex and distance to focus from directix