How to force prime numbers into a line?

Inspired by an article on Prime Spiral and Hough transform I tried to analyze patterns created by plotting numbers on spiral (Archimedean?).

where angle and radius is incremented by a constant value 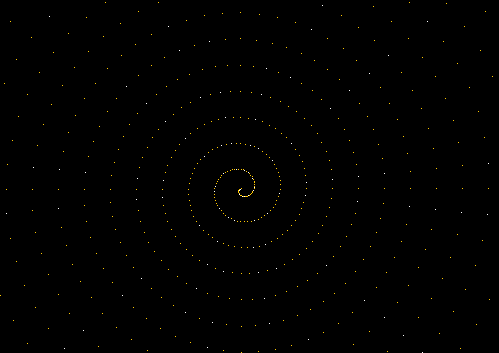 No surprise so far.

When all non prime numbers are suppressed this ray pattern appears at a specific point (manipulating the increments of the spiral): 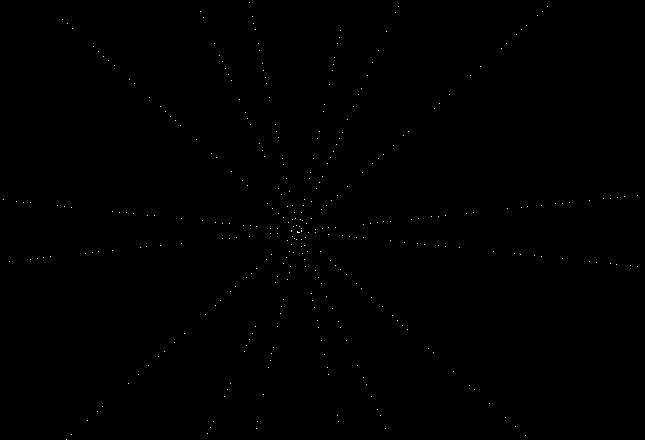 All prime numbers are on 16 lines (ignoring that the first numbers probably don't match the scheme). 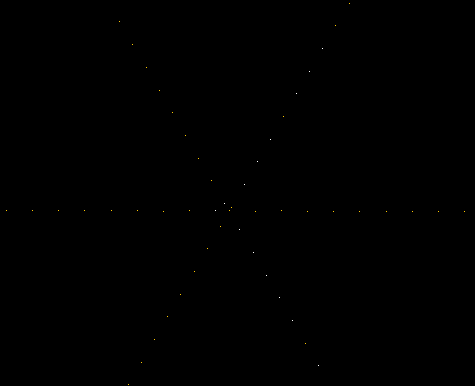 Mirroring them on the x-axis doesn't seem to help to have them on a single line. Because there are some non prime numbers in the lines.

What could I do the force them to a single straight line?

If this pattern is a well known property of prime numbers how is it called?

There are 2 behaviours going on here.

In your last picture, it's easy to see that all numbers lie on the 6 rays through the origin. Why? This is because there are $2\pi$ radians in a circle, and you are incrementing by $\pi/3$ radians each time (which is 1/6 of the circle). This is why you are getting distinct rays.

The other behaviour occurs when you only look at primes. In the second picture (the one consisting of only primes), there is space for 60 rays (since you are incrementing by $\pi/30$ radians, which is 1/60th of a circle each time). So the new question is, why do only 16 rays appear?

The answer is that $\varphi(60) = 16$, meaning that there are only 16 residue classes for primes to fit in mod 60. Stated differently there are only 16 solutions to $p \equiv x \pmod {60}$ in $x$, where $p$ ranges across all the primes. So there are 16 distinguished rays containing primes.

Similarly, there are two distinguished rays in the last picture, which is why you can only see primes on 2 of the rays.

You might be interested to know that the property of being a ray containing primes will not be origin-symmetric, but mirror-symmetric over the horizontal line $y = 0$. This has to do with how $\gcd(x,n) = \gcd(n-x,n)$, and the order in which you are plotting these rays.

Loosely, what's going on here is that you're discovering the notion of residue class. If you look carefully, you'll discover that all of the points on your original spiral actually lie on a finite set of 60 lines through the origin: one line for every $6^\circ$ or for every $\frac\pi{30}$ radians. This means that what line a number is on is determined by its remainder when divided by $60$: $19$ is on the same line as $79, 139, 199, \ldots$ For convenience's sake, we'll label these lines by the smallest positive number on them (this is called the residue class of all the numbers on the line, $\bmod 60$). Now, consider:

As for whether you can get all of the primes onto a single line this way, the answer is no (unless you use such a large angle increment for your spiral that all your points lie on either the x or y axes), but the reasoning is a bit complex: it turns out that for any number $n$, there are infinitely many primes that are of the form $k\times n+1$ (or primes that are on the line labeled '$1$'), and there are infinitely many primes of the form $k\times n-1$ (or primes on the line labeled '$n-1$'). This means that you'll get at least a couple of lines for any angular increment, and in fact you're going to get more than that - the number of lines you should expect to have primes on them is (essentially) equal to Euler's Totient function $\phi(n)$, which counts the numbers less than $n$ that are relatively prime to $n$ (i.e., have no common factors with $n$), and it's known that $\phi(n)$ grows as $n$ does, in the sense that for any given $K$ there are only finitely many values of $n$ where $\phi(n)$ is less than $K$.

But how do you know that all of these lines will have primes on them? (It should be clear that the primes can only show up on these lines, by a variant of the argument I gave above). Well, that's the content of Dirichlet's Theorem, which basically says that for any arithmetic progression, as long as you know that values on the progression are relatively prime, there will always be infinitely many primes on that progression. Here, the 'spokes' in your renderings represent these progressions.

Let's fix some notation first: in polar coordinates an Archimedean spiral is a curve in the real plane (i.e. the "usual" plane with coordinates over the real numbers) $$ r = a + b \cdot \theta $$ for some fixed constants $a,b \in \Bbb{R}$ with $b \neq 0$. Here $r$ and $\theta$ represent the radius and angle of a given point, respectively.

This implies, though, that every positive integer will have to lie on the same line, not just the primes. Actually, this is already happening even in your last picture: if you plot the other numbers as well and not just the primes, you will see that they lie in the same $$ 6 = 2\pi \cdot \frac{3}{\pi} $$ rays, too.

220
Meaning of Rays in Polar Plot of Prime Numbers

7
Random binary array shows patterns around prime numbers
4
Smallest Prime Factor - Why does this algorithm find prime numbers?
220
Meaning of Rays in Polar Plot of Prime Numbers
77
Why are the last two numbers of this sequence never prime?
1
Uniqueness of numbers composed of primes