Is there a mathematical way to fold a $20 dollar bill for compactness?

I had a strange thought. I used to carry a pill fob on my keys with an emergency $20 bill in it, before the whole thing got stolen.

I always had some trouble fitting the bill inside the fob and barely managed it each time. I would fold it a couple times then roll it really tight and put it into the tube before it expanded.

Imagine that I don't have the restriction of needing a tube. I know to minimize volume a sphere is best, but you can't fold a paper into a sphere, something about Gaussian Curvature. Is there a math formula or technique where a bill can be folded maximally? Specifically to narrow it down I found this formula online: $$ L = \frac{\pi t}{6}(2^n + 4)(2^n - 1) $$

Gallivan's formula gives the maximum number of times you can fold a bill going in the same direction. There is also another formula she came up with for an accordion fold.

If I have a finite number of folds that can be done and I know what that number is. Then is there a way to figure out what the most compact method of folding the bill is without having to try all of them?

So, to fold it compactly, we want it to be as sphere-like as possible. When paper is folded, Gaussian curvature does not change, so if the paper is curved in one direction, it must be flat in the other direction. So the closest we can get to a sphere, therefore, is a cylinder (curved in one direction and flat in the other) where the diameter is as close as possible to the height.

To allow the fold to be as tight as possible, we need to use an accordion fold $n$ layers thick rather than folding in half over and over (which is what Gallivan's formula applies to). Since loss in an accordion fold increases linearly, as long as we do nothing ridiculous we can discount it from the calculations. Further, to minimize the folds and prevent loss, we will be folding the height of the bill rather than the length. So will can the formula $h/n$ to find the height of the final cylinder and $nt$ to find the thickness after the accordion fold.

So the most compact way to fold any US bill (for non-US bills, the numbers would need to be worked out again) is to accordion fold it in 6ths to get a long strip, and then tightly roll the strip.

When actually folding, the rolling portion is fairly difficult and might take several tries, but it is doable. Trying it myself, I ended up with a cylinder with a diameter of 1/2 in and a height of 7/16 inches. This is probably as close to spherical as possible, as shown below. 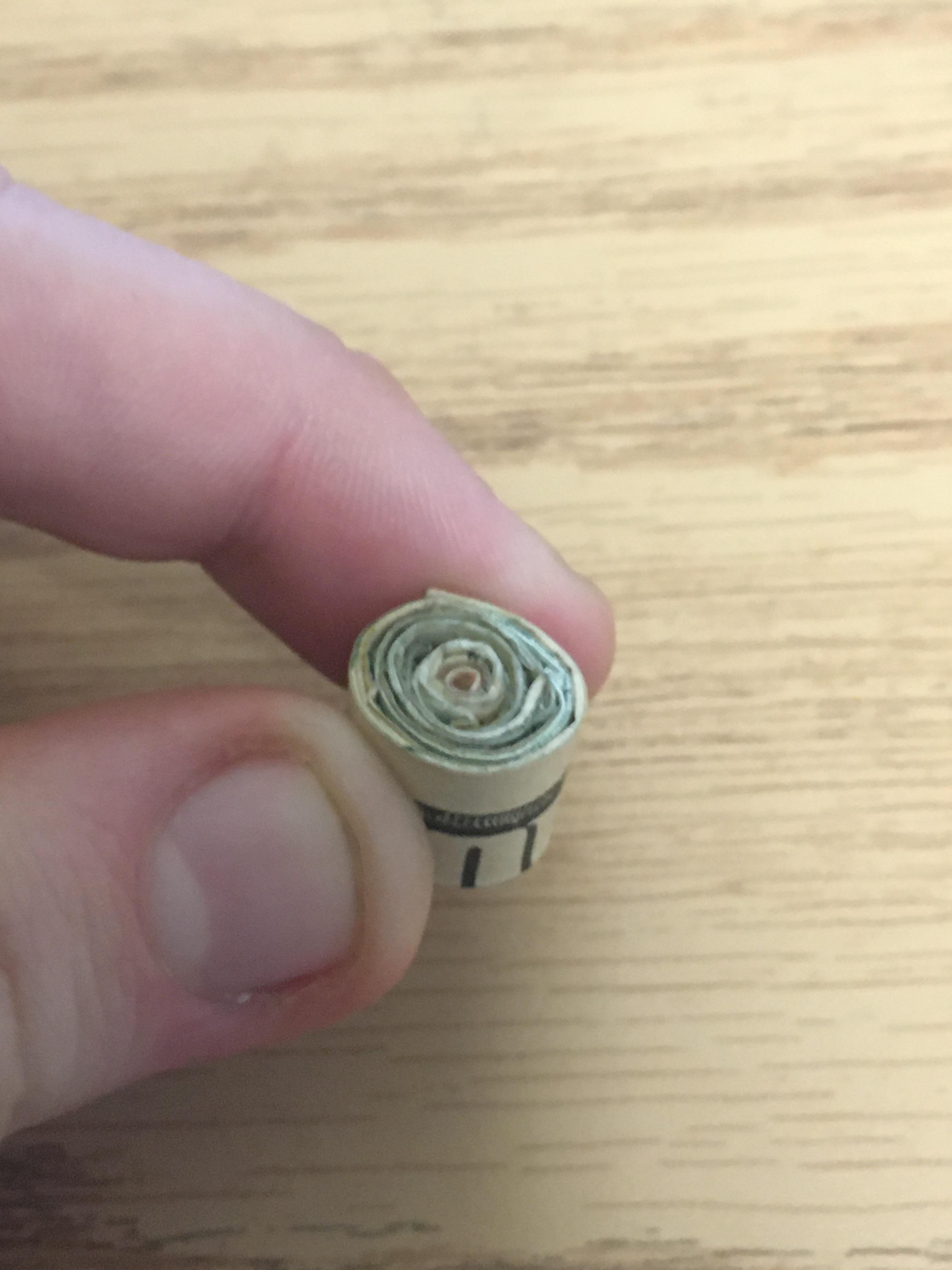 Not the answer you're looking for? Browse other questions tagged linear-algebra origami or ask your own question.

5
Is there a name for this $k$-fold vector product?
2
Eigenvalue For A 2-Fold Tensor
1
Quickest way to see that unitary group is $3$-fold intersection of orthogonal, symplectic, and complex groups?
2
Is there a way to express the basis for $\hom(V,W)$ abstractly?
21
How to answer mathematical questions in the proper way
3
Is there an exact solution for tan(36) using origami from a unit square?
0
How do I calculate the average interest rate for a dollar cost averaging investment?
0
Is there is a way for finding independent vectors?
0
Is there a better way to solve this diagonalization?