How to determine the location of a mark on an object that has changed size?

I apologize up front for the horrible title, I do not have the mathematics vocabulary to eloquently summarize this in a title.

This first picture and question is a lead-up to the actual question. In an attempt to explain it. 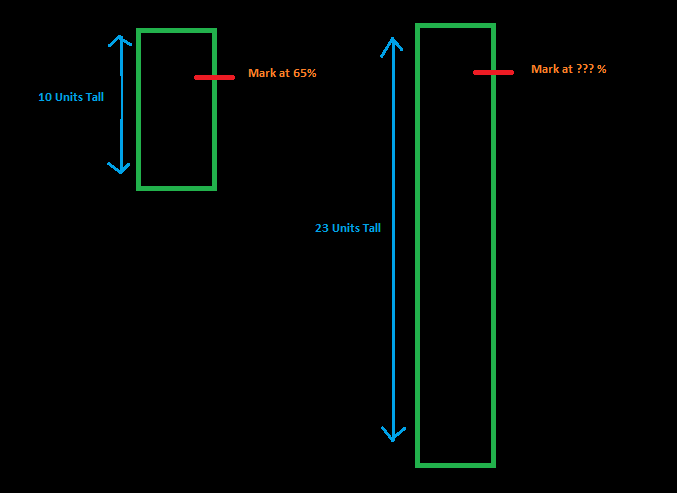 Edit: The green object ONLY expands down, and the red mark stays in the exact same position relative to the top o the object. The red mark also maintains the exact same size in units, even though that size is unknown. 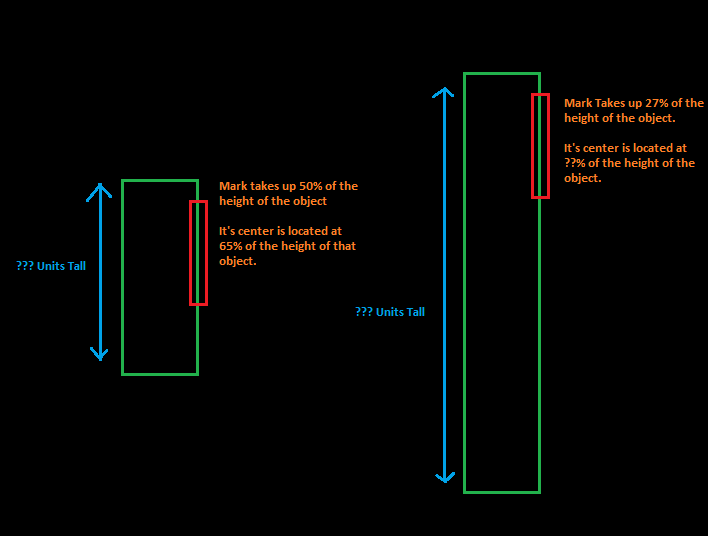 I hope that made sense. If that is unsolvable, what other variable do I need? (Additionally, what are appropriate tags for this question?)

Edit: Oddly enough you can intuitively solve this when the numbers are simple. If the red mark is at 50% of the height and the green box increases in size downwards by 100% of it's current size. Then the red mark will be at 75% of it;s height. I'm not sure if this is an intuitive guess that just ends up being correct, or if there is some sort of mathematical backing.

I assume your mark doesn't change position relative to the upper bound of the expanded object (looks so to me based on your picture).

It depends how the object is expanded.

If it is expanded uniformly by a certain factor then the size of the mark is also expanded by the same factor and its location is unchanged.

8
Numb3rs Challenge
0
How to find the maximum & minimum possible Location within a graph?
1
Trig problem, finding angles and ranges
3
Determine scale for random x and y so that aspect ratio is maintained and product is <256
2
Find radius of fixed length arc of a circle in a bounding box when the circle intersects the edge of the bounding box
0
How to find the height of an object via it's shadow
1
Packing problem -uniform distribution by Percentage of coverage - circles on a plane .
5
Determine the location an aerial photo was taken from