Why are two planes parallel to the same line not necessarily parallel?

What is a case in which the statement, "Two planes parallel to the same line are parallel" be false? 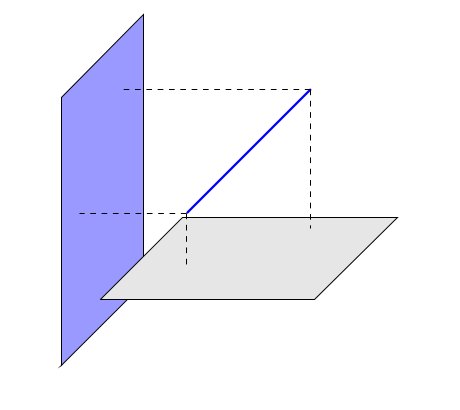 A very simple example is two different planes containing the same line: both are parallel to that line and to any other line parallel to it.

In the image above both planes are parallel to the line defined by points A and B.

More examples can be found on Google

Because in three-dimensional space, the planes that are anchored to a line still have one more degree of freedom. They can rotate around the line. So the two planes that are parallel to the same line could be at an infinite number of angles to each other.

Making lines parallel in 3D is simpler than making planes parallel, because planes have extra dimension. You can think of a plane as an intersection of two lines.

So as you can see there is one more line involved. Omitting that extra line is what makes your statement incomplete. Not necessarily false. It may still be true in one case out of infinity.

All the given solutions are particular case which can be generalized in the following context:

consider that in a three dimensional space, a given plane has infinite parallels planes; the order of such an infinite is one (infinite of the first order, i.e. you can fix a single parameter, for instance the distance from the line and the plane, to identify the plane).

A straight line, in the same three dimensional space, has infinite planes parallel to itself; but the order of such an infinite is two (infinite of the second order: you need two parameters (distance and angle in a given space of coordinates).

So, we simply cannot compare the two situations: the only case in which the straight line and the two planes are parallel, happens when the angle is fixed in an opportune way. So, you remove a degree of freedom and finally obtain infinite^1 plans parallel to the line and each other.