Motivation: I am currently in a rather uncomfortable spot in my Analysis studies. In class we introduced the Jordan measure in a very vague way, meaning no proofs, no examples. (Because next Semester we study the better Lebesgue-Measure theory)

I do understand the concepts of it as a generalization of the 1 Dimensional case.

My approach: Clearly the set is bounded, from below by $0$ and from above $1$. I don't know how to work with the definition as explained above in the motivation to show that said set is Jordan measurable.

The best thing I could do was to cheat my way around by computing the following picture: 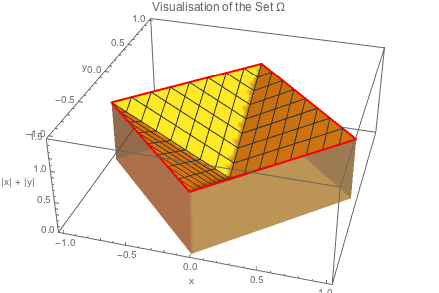 My question is if I can formalize this idea into an actual proof rather than my hand wavy explanation above.

Or even better, is it possible to show that $\Omega$ is Jordan measurable by just relying on the definition of above/below approximations and check the equality of the infimum and supremum? Because said definition is so far what I understand best, the iff statement linked is only covered in the $\implies$ direction in my course.