Picking K counters out of K buckets containing NK counters, N of each different colour, up to N in each

This is a generalisation of a question that recently came up while solving a TopCoder problem.

Suppose we have N blue counters, N red counters, N white counters, and so forth, K colours in total. We distribute them into B >= K buckets, such that there are not more than N counters in each. Show that we can always pick K different-coloured counters from a set of K different buckets (one from each).

(In the TopCoder problem K was fixed at 3, but here it's arbitrary.)

Intuitively this seems simple. I'm looking for a satisfactory simple argument, but I just can't see it. I only have the argument below, which seems more complex than necessary.

Consider the first of these sets. There are Z buckets with at least Z+1 colours (because there is red too). As there are at most NZ counters in total in these, while there are N*(Z+1) counters of these colours altogether, there must be at least N counters of these colours in some of the other two sets. If this is in the last set, then it's easy to see what to do to get Q+1. The remaining case is if it's in the middle set. The rest of the argument refers to the following diagram: 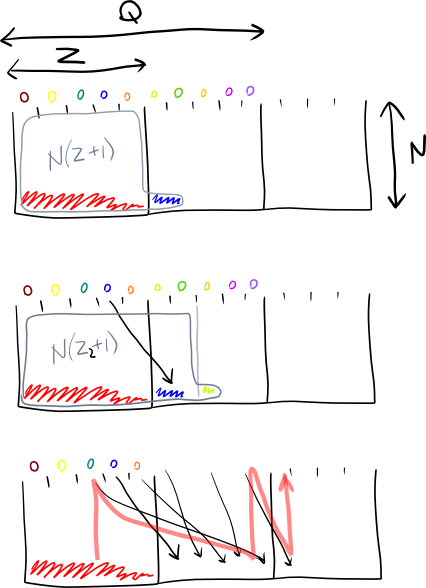 The diagram shows that when it's in the middle set, we use the same argument again to show that there have to be some of the left-of-the-line picked counters beyond the boundary. Continuing in the same way, the boundary will be pushed until, eventually, there will be some of our counters in the third set. Every time it's pushed, an arrow is drawn from a picked counter on the left of the line to similarly-coloured counters to the right of the line. When we eventually reach the unpicked set, the third diagram shows that there will be a bunch of arrows all going diagonally left to right. All arrows have unique colour. And the thick red arrow shows how to follow the arrows to update the choice of which colour counter is picked from each bucket to get Q+1.

I'm asking if anyone can think of a much simpler proof of the same statement.

Community wiki answer based on the comments so that the question an be marked as answered:

For each colour, consider the set of buckets in which it is represented. We want to pick $K$ different representative buckets for the $K$ different colours. The assumptions of Hall's theorem are fulfilled: Since every bucket contains at most $N$ counters, any $j$ colours are represented in at least $j$ buckets.

Thus we can apply Hall's theorem to conclude that the desired set of representatives exists.

Not the answer you're looking for? Browse other questions tagged combinatorics discrete-mathematics contest-math balls-in-bins or ask your own question.

1
How many different towers, with regards to colour, can be built?
0
How many possible ways to pick n different coloured shirts from the given set?
2
Finding the number of counters having each colour.
2
Number of colourings for which the vertices of a square can be coloured by three different colours such that adjacent vertices get different colours.
0
Counters are all alike except colour and there are atleast ten of each colour.How many arrangements will have counters of each colour?
2
Optimality of the uniform distribution for a load balancing problem
2
$9$ Bags of coloured counters, $9$ grid squares. $3$ Counters can be laid at a time. How many permutations?