I have learned that 1/0 is infinity, why isn't it minus infinity?

My brother was teaching me the basics of mathematics and we had some confusion about the positive and negative behavior of Zero. After reading a few post on this we came to know that it depends on the context of its use. 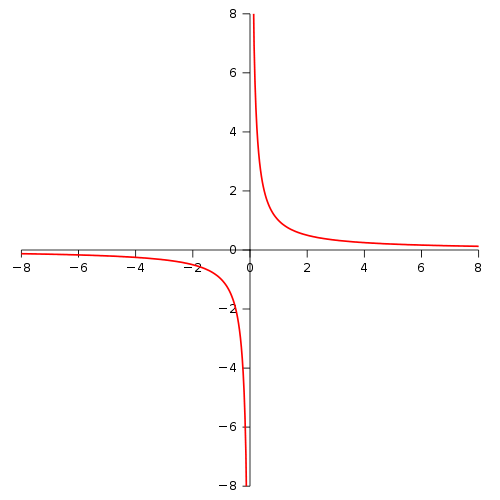 That these limits are not equal is why $1/0$ is undefined.

where $x,y$ denote ordinary real numbers. (one can define the other arithmetic operations too)

The projective line has only one infinite element. In the projective line, the same number $\infty$ is at both "ends" of the ordinary line. There is another common number system -- the extended real numbers -- that has two infinite elements: $+\infty$ and $-\infty$. Make particular note that $1 {\color{cyan}/} 0$ is undefined for the arithmetic of extended real numbers. (where again I've added color to distinguish)

Unfortunately, people often use $\infty$ instead of $+\infty$. So, when someone writes $\infty$, it can be unclear whether or not they are doing arithmetic in the projective real line, or in the extended real line.

Since you are having this confusion, I think it helps to consider the concepts of zero, infinity and "undefined".

Likewise, 1 / 0 is not really infinity. Infinity isn't actually a number, it's more of a concept. If you think about how division is often described in schools, say, number of sweets shared between number of people, you see the confusion. If I go around some people giving them 0 sweets each, how many people do I need to go around until I have given away my 1 sweet? An infinite number? Kind of, because I can keep going around infinitely. However, I never actually give away that sweet. This is why people say that 1 / 0 "tends to" infinity - we can't really use infinity as a number, we can only imagine what we are getting closer to as we move in the direction of infinity. However, in this case, the number of sweets I have is never changing, so I'm not really getting closer to anywhere. Even this logic doesn't really work.

The long and short of it is that 1 / 0 doesn't really make sense as a calculation. When we do use the notion of infinity we tend to use positive infinity where it doesn't matter purely by convention. However, if you think about it too hard you start to get into philosophy and stuff, like "what actually is infinity?" and "wait, what is a number"?

The things people are talking about where it does are different ways of using numbers so they don't really count. For example, in the trivial ring, there is only one number, which works like a 0 (add it to anything and you get that thing) and a 1 (multiply it by anything and you get the same thing again) and makes sense because you can only add it to or multiply it by itself to get itself. It's pretty boring actually, but in that case this one number - let's call it x - is both 0 and 1, so 1 / 0 = x / x = x because everything equals x. As you can see, this is a bit of a cheat because we don't even have enough numbers to have a notion of 1 / 0 in the way you're thinking of it.

In Calculus sometimes we write

This notation makes $\frac{1}{0}$ sometimes $+\infty$ and sometimes$-\infty$, but you have to be careful what it means. It doesn't literally mean $\frac{1}{0}$, it's actual meaning in Calculus is

While writing $\frac{1}{0}$ is much more convenient than writing that expression, it has the downside that many people take it to mean literary $1$ divided by $0$.

After reading few post on this we came to know that it depends on the context of its use.

Actually what happens is more subtle. In two different areas of mathematics that notation is used to denote two different things. When you say $\frac{1}{0}$, if you mean standard division of real numbers, then that is not defined, no matter what the context is...

There are actually many situations when the unfortunate use of the same notation/definition for different things creates confusion....

It depends on context. When dealing with rational functions or trigonometric functions, it can make sense to deal with a line $\mathbb{R}\cup\{\infty\}$ in which a "neighborhood of $\infty$" is a set that looks like $(-\infty, a)\cup(b,\infty)$, so the line becomes topologically a circle; the two ends meet at $\infty$. A similar point of view is heavily relied on when studying functions of a complex variable, and you're appending just one $\infty$ to the plane $\mathbb{C}$. It is in that sort of context that it makes sense to say that $1/0$, or $5/0$, etc., is $\infty$.

Here "getting close to $\infty$" means getting very large in modulus, no matter the direction (including, but not exclusively, both directions of the real axis). This is useful, for example, when considering rational fractions : they always admit a limit in $\infty$, and take values in $\mathbb{C} \cup \infty$.

Of course this is strongly linked to projective geometry as well, since $\mathbb{C} \cup \infty \approx \mathbb{P_1}(\mathbb{C})$.

Works just fine if you are discussing Möbius transformations in $\mathbb C \cup \{\infty\},$ called the extended complex plane or the Riemann sphere. Otherwise, no.

As far as I am aware, when doing floating point math on most computers in most computer languages, 1.0/0.0 will yield positive infinity (-1.0/0.0 yielding negative infinity). I think this question is extremely dependent on context and usage.

First off, in the conventional system of real numbers, the expression $\frac{1}{0}$ is considered as undefined, that is, it has no value. "Infinity" does not exist in the real numbers. $0$ is not in the domain of the function $f(x) = \frac{1}{x}$.

There is good reason why it is not defined: the function $f(x) = \frac{1}{x}$ is usually taken to mean "give me the multiplicative inverse of $x$", but $0$ lacks a multiplicative inverse. This is easy to see. The function $f(x) = 0x$ is totally non-injective -- there is no subset of $\mathbb{R}$ containing more than one point on which it is injective. We lose all information about what $x$ was when we put it in there. So how can we hope to have a value that lets us invert it?

That being said, there are contexts in which we may take $\frac{1}{x}$ to stand for something more general, and where $\frac{1}{0}$ may be meaningful. One such example, where we can say $\frac{1}{0} = \infty$, is the real projective line and its complex equivalent, the Riemann sphere. In this case, the infinity is unsigned, that is, $-\infty = +\infty$. If we choose to use a generalized system of "numbers" that includes $-\infty$ and $+\infty$ as separate elements, then we usually still don't define $\frac{1}{0}$ because $\frac{1}{x}$ approaches $-\infty$ as $x$ approaches $0$ from the left and $+\infty$ as it approaches $0$ from the right. We could take it as one or the other if we wanted to, but the choice would be arbitrary.

A big caveat of these systems is that the laws of arithmetic will be different in them. For example, in the above-mentioned RPL, caveats occur when dealing with expressions involving infinities.

Division by zero can also be made sense of in an algebraic structure known as a "wheel".

From the Wikipedia article:

Wheels discard the usual notion of division being a binary operator, replacing it with multiplication by a unary operator $/x$ similar (but not identical) to the reciprocal $x^{-1}$, such that $a/b$ becomes short-hand for $a\cdot /b=/b\cdot a$, and modifies the rules of algebra such that

So as you can see, one has to discard a whole lot of the "usual" rules of algebra in order for division by zero to even make sense. As others have done an excellent job of explaining, in the standard real numbers, it does not make sense to divide by $0$.

Infinite numbers do exist in the hyperreal number system which properly extends the real number system, but then their reciprocals are infinitesimals rather than zero. Thus the idea of $\frac{1}{0}$ can be interpreted as saying that if $\epsilon$ is infinitesimal then $\frac{1}{\epsilon}$ is infinite. This resolves your problem because it shows that $\frac{1}{\epsilon}$ will be positive infinity or infinite infinity depending on the sign of the original infinitesimal, while division by zero is still undefined. This viewpoint helps account for all indeterminate forms as well, such as $\frac{0}{0}$.

$\frac{1}{0}$ is not defined...end of story. It is not infinity or minus infinity (these things are not numbers either).

Not the answer you're looking for? Browse other questions tagged infinity indeterminate-forms or ask your own question.

2
Why do geometric sets such as $(\infty, x]$ never have infinity included?
1
limit for minus infinity for $\ln(x)$
29
Why isn't finitism nonsense?
1
why 1/ infinity isn't indeterminate like other indeterminate?
3
I don't understand the logical leap made in the analogy of $e$
0
Why is counting with infinity not indeterminable?
0
Definite Integral from or to; plus or minus infinity
0
How to compactly write a simple set for 2 variables when second variable may have same properties as first or it may optionally be positive infinity?