Order of differentiaton for multivariable functions with arbitrary dependence of variables

While studying Neural Networks, I was bogged with a nasty problem, for which I did not find a satisfying answer using my mathematical knowledge.

Let's assume we have a complex multivariable function, which is directly or indirectly dependent on various variables; such that we can draw an arbitrary directed acyclic graph using the variables which affect the function. To visualize the situation, let's consider the following example diagram: 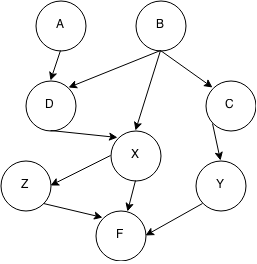 Much more simple tree diagrams are common in resources about multivariable chain rule and I am familiar with them. But I cannot justify the following problem:

Assume that, in such a hierarchy of variables, where $F$ is the final function which is being evaluated (which is nicely smooth), we want to take the total derivative of $F$ with respect to a variable in the hierarchy; let's name this variable $Q$. By the total derivative, I mean that I am going to perturb $Q$ and look how $F$ is going to change, without holding other variables fixed, in contrast to a partial derivative. So, we are going to evaluate $\dfrac{dF}{dQ}$. I can show by induction that this is equal to $\sum_{i}\dfrac{dF}{dP_i}\dfrac{\partial P_i}{\partial Q}$ where the sum runs on the variables which directly depends on $Q$ and where I evaluate the total derivative with respect to such variables.

Let's assume we have another variable, say $W$, in this hierarchy. For regular partial derivatives, the order of differentiation does not matter. I want to learn that whether this holds for this case as well, where we have $\dfrac{d^2F}{dWdQ}$ and $\dfrac{d^2F}{dQdW}$. If I take the total derivative twice, in different orders, will I obtain the same result? I tried to show this by using induction and succeeded in some simple examples, but I cannot generalize this for an arbitrary hierarchy of variables.

In any case, I think the statement you're trying to prove is false if $W$ and $Q$ depend on each other. Consider the example of a function $F$ which depends only on a variable $W$, which in turn depends on $Q$ via $W = \sin(Q)$. Then

EDIT: Realizing that the previous example might have been more abstract than needed, here's a very straightforward one: Suppose we have two variables $W$ and $Q$, with the relation $W = e^Q$, and we want to study the function $F(W) = W$.

Not the answer you're looking for? Browse other questions tagged calculus multivariable-calculus derivatives partial-derivative or ask your own question.