As a beggining to convex hull algorithms lecturer introduced the structure which it's called "Hierarchy Structure". 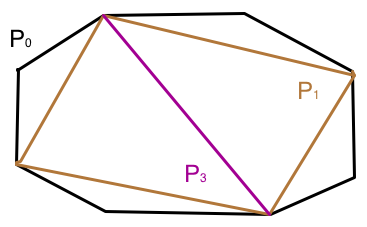 According to definition there is at most log$n$ such convex hulls, where $n$ is the number of vertices of a given convex hull.

Unfortunately I haven't found precise definition of Hierarchy Structure in textbooks of computational geometry. If anyone familiar with the above definition, please send me a link.

Having defined the Hierarchy Structure I have to prove the following lemma.

Lemma1. If $P$ is a convex hull and $P'$ in the next convex hull after $P$ in Hierarchy Structure, $q$ is the point in $P \setminus P'$, in this case two tangent line from $q$ to $P'$ are going through two adjacent vertices of convex hull $P'$ (see the picture below). And a polytop that is formed from adding $qx$ and $qy$ to $P'$ and deleting $xy$ from $P'$ is actually convex. 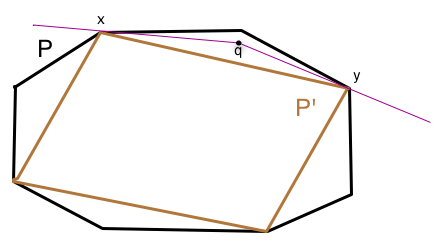 The problem is I cannot figure out how to prove it rigorously. The prove of the second part of the lemma seems very obvious, if $q$ is the external point to $P'$ so adding this point will form new convex hull. But how to show that needed operations is deleting $xy$ and adding $qx$ and $qy$. Also it seems like the prove of second part should help to prove the first part. If you have any idea how to prove this lemma correctly I'll appreciate if you share it with us.

The operation you describe is equivalent to a step in the incremental algorithm for constructing a convex hull algorithm. Take $q$ to be a new point and $P'$ is your partial hull just before processing $q$. Since $q$ is external to $P'$ and does not evict any existing hull vertices. It must be the case that the resulting polygon is convex.

Proving convexity can be done in two ways.

Not the answer you're looking for? Browse other questions tagged convex-analysis computational-geometry polytopes convex-hulls or ask your own question.