Just a quick question about the geometry of Hilbert spaces from an intuitive standpoint. Maybe just assuming we're working with $L^2$ would simplify the situation. Basically, in something like $\mathbb{R}^2$ we have the situation that $\cos(\theta)=\frac{\langle a,b\rangle}{\vert a\vert\cdot\vert b\vert}$, and the idea of an angle between vectors is very meaningful, geometrically. We can easily extend this idea to $\mathbb{R}^n$ because when we talk about the angle between two vectors, we mean we are choosing the plane that both of them lie in, and picking the vector in there. But what does this really mean in a Hilbert space like $L^2$? I have a good intuition about functions, and about geometry (topology) separately, but not really the "geometry of functions".

Now, there may be no visualization of this in $L^2$, and I'm not asking for one, but is there any sense to doing geometry (i.e. actual polygons, things like that) in a space like $L^2$? Also, what sort of applications do ideas like this have in functional analysis? Are we ever interested in ideas like "planes" of functions, polygons, surfaces, solids, etc.? What do we really mean by angles, projections, normal vectors? And do these sorts of things ever have any sort of interesting relationships?

I think in infinite-dimensional spaces one should interpret the angle as a measure of how correlated two functions are. The intuition manifests itself most clearly when the functions are random variables of mean zero; then their inner product is precisely their covariance, which is zero when they are independent (that is, uncorrelated).

Certainly one of the most important thing about Hilbert spaces is that there is a good notion of projection, and things one would expect to intuitively be true about projection (for example, that the projection of a vector onto a subspace is the part of the subspace closest to the vector) are actually true because it turns out the inner product makes everything work. So in that sense, one can sometimes reliably use finite-dimensional intuition in the infinite-dimensional case.

Perhaps one can also draw intuition from quantum mechanics, where the inner product is a "probability amplitude." I don't know enough about quantum mechanics to really elaborate on this point, though.

One motivation for the $L^2$ inner product is as follows: Imagine sampling your functions f and g at N equally-spaced points, and putting those values into vectors $\vec{f}$ and $\vec{g}$. 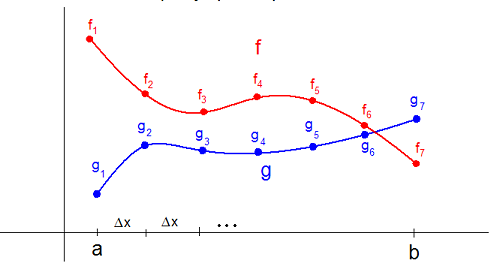 It's not quite rigorous, but a useful mental model is to think of each different x in the domain as representing a different orthogonal direction in your function space, and then the value f(x) is the "coordinate" of f in the x direction.

Not the answer you're looking for? Browse other questions tagged soft-question functional-analysis hilbert-spaces or ask your own question.

3
What's the connection between Banach/Hilbert spaces and tools like power series, Fourier transforms etc.
4
Relationship between different topologies of bounded operators on a Hilbert space
3
Can Hilbert spaces generalize non-Euclidean geometry by having the sum of the angles of a triangle not be equal to pi?
0
Orthogonality in Hilbert Spaces
0
A question about Gelfand triples