The two subgroups $x_1= \langle d, e\rangle$ and $x_2=\langle f,g\rangle$ are each "abstractly" isomorphic to the Klein 4-group, and share the central element $b$.

My question: Is there a way to draw $D_4$ as motions of a geometric figure that would allow me to see the automorphism?

$\mathrm{id}$, $A$, $B$, and $C$ are rotations that map the top face to itself; $D$, $E$, $F$, and $G$ are the rotations that exchange top and bottom faces. The automorphism corresponds to renumbering the vertices in the bottom.

The two squares give rise to the same dihedral group $D_4$ (when viewed as motions of the plane): four rotations (one trivial) and four reflections. The $x_1$ of one square looks like the $x_2$ of the other square. In the image below the two squares are colored red (unprimed) and blue (primed) rescpetively. Imagine that $1'$ is the top corner of the blue square, so $3'$ is at the bottom. Orient it so that $1,2,3,4$ are the NW, NE, SE, SW corners respectively. The reflection w.r.t. the vertical axis gives $d=(12)(34)$ on the red square, and $g'=(2'4')$ on the blue square. Similarly other elements of $x_1$ on the red square become elements of $x_2$ on the blue square and vice versa. 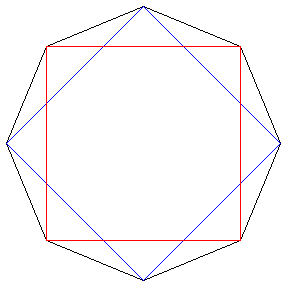 3
$D_6$ as permutation group
1
What is a conjugacy class of reflection?

50
Isomorphic quotients by isomorphic normal subgroups
1
Partitions and Orbit Sizes
1
Are these two inclusions of finite groups, equivalent?
7
Are all Sylow 2-subgroups in $S_4$ isomorphic to $D_4$?
6
In $S_{4}$, find a Sylow 2-subgroup and a Sylow 3-subgroup.
3
Calculating the normalizer of a sylow p-subgroup