How to compute a negative "Multibrot" set?

The Mandelbrot set is defined as follows: given the function f(z, c) = z2 + c, a number z in the complex plane is in the Mandelbrot set if and only if the sequence defined by z0 = z, zn+1 = f(zn, z0) is bounded.

There are numerous programs that draw images computed from such definitions, including my own "HTML 5 Fractal Playground", written by me. My software runs in a web browser, and I will provide deep-links in my question to see the software draw various fractals that I refer to. However, I do not guarantee that these links will work forever. 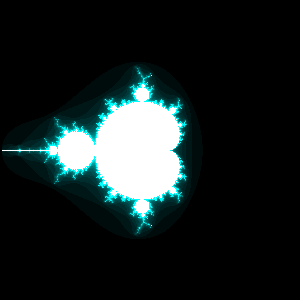 We know that the above rule works because once the absolute value of the sequence exceeds 2, the exponential part of the equation dominates.

The Mandelbrot set is generalized into any set that can be generated by an equation such as the function f given above. One of the best-known generalizations are the "Multibrot" sets. We simply replace the exponent 2 in f with some other number. When the exponent is increased above 2, the same rule above about the absolute value of the sequence can still be used to generate graphs. I refer to these Multibrot sets as M(n), where n is the exponent used in place of two, so for instance, M(2) is the original Mandelbrot set. 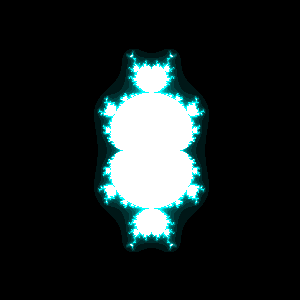 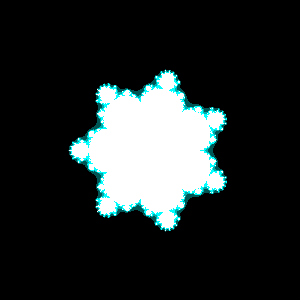 A little bit of analysis reveals that any number z with absolute value greater than 2 is actually inside M(-2). That's because the addition part of the equation overtakes the negative exponentiation, preventing the value from escaping.

That means that even the number 1,000,000 is in M(-2); the sequence simply "bounces" back and forth between very small and very large numbers.

The problem I have is that I frequently see images using the "bailout" method used to represent these sets and I know they are wrong. Heck, my own software will draw such a figure, and I know it's wrong, yet my graph, known to be incorrect, looks similar to others that Google will find. 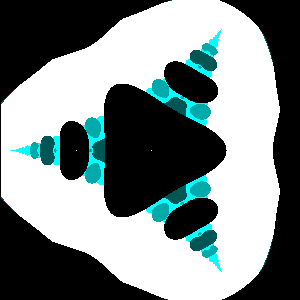 Edit in response to the answers and comments below.

The answers below indicate that I can draw a negative Multibrot fractal by using a completely different algorithm. Rather than checking that the iterating function generates a sequence that "escapes", I can check that the sequence is periodic. Interestingly, this provides variable values for coloring points inside the set, rather than outside the set, as the escape time algorithm does.

I have modified my program to use this algorithm and generated the following image for f(z,c) = z-2 + c: 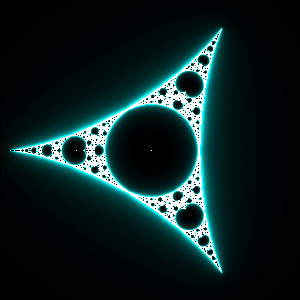 The above image colors the set based on how many iterations were computed to detect periodicity. However, it was also pointed out that a different plot may be drawn by using the detected period.

As you say, if your objective is to study the dynamical behavior of functions of the form $f_c(z)=z^p+c$ for negative values of $p$, then there is really no reason to expect an "escape radius" to exist at all. To understand why, and to try to figure out what we should do, let's look at the specific case of $p=-2$; that is, we'll try to understand the parameter plane for the family $f_c(z)=z^{-2}+c$. To do so, perhaps we should step back a bit first to make sure we understand why we care about the escape radius for the Mandelbrot set.

The Mandelbrot set (and other bifurcation locuses) arises in the context of complex dynamics. That is, we study the iteration of a function $f$ mapping the complex plane $\mathbb C$ to itself. The theory of this type of iteration is well developed for rational functions. Note that our function $z^{-2}+c$ is a rational function but not a polynomial, like $z^2+c$. This complicates things a bit.

Taking all this into consideration, here's how your algorithm should proceed. For a fixed value of $c$, follow the orbit of $\infty$. Equivalently, since $f_c(\infty)=c$, follow the orbit of $c$. Iterate until you detect periodic behavior. You've just got to code it; there is no simple test for this other than saving a lot of terms and comparing your current iterate to previous terms. You might also need to deal gracefully with the possibility of landing on zero. If you do, then that means that $\infty$ has eventually mapped back to itself which implies that it lies on a super-attractive orbit. In any event, if you do detect periodic behavior, then shade $c$ according to how long it took. If you don't, then shade $c$ some default color.

Implementing this, I came up with the following image: 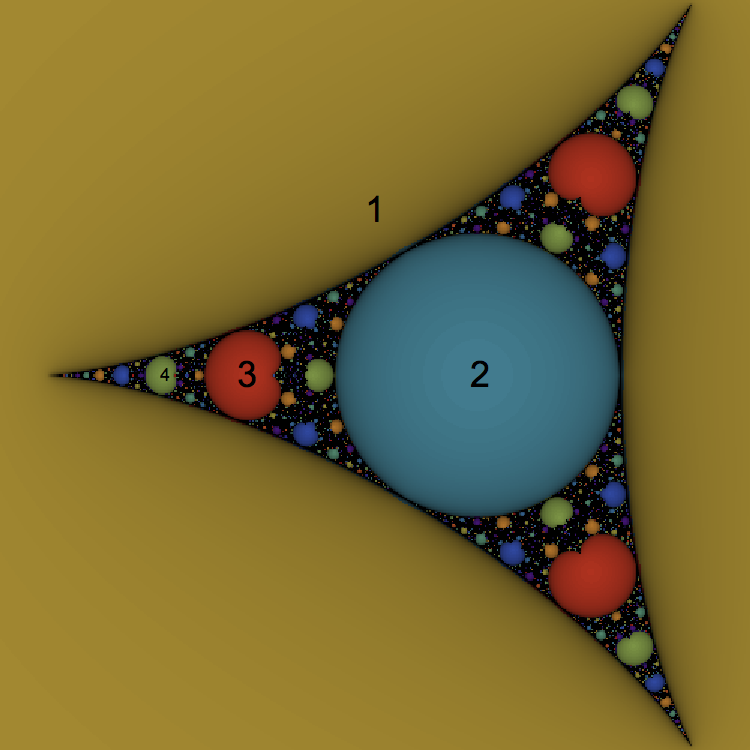 The colored regions corresponds to points where some periodic behavior was detected and regions of a common color should have the same period. The shading indicates how long it took to detect the period. The black region indicates that no periodicity was detected. I iterated 2000 times and searched for orbits up to length 100. The numbers indicate the length of the detected orbits. If we start in the exterior portion labeled 1, we are guaranteed to find an attractive fixed point and the corresponding Julia set will be totally disconnected. If we start in the circle labeled 2, we are guaranteed to find an attractive orbit of length two and the Julia set will be a topologically a circle. If we start in the regions labeled 3 or 4, we will find orbits of those length. The Julia sets will be more complicated but if we stay in any connected domain, the Julia set will stay topologically the same. Here are representative Julia sets, labeled by $c$, for those four regions (corresponding to the positions of the text labels, in fact): 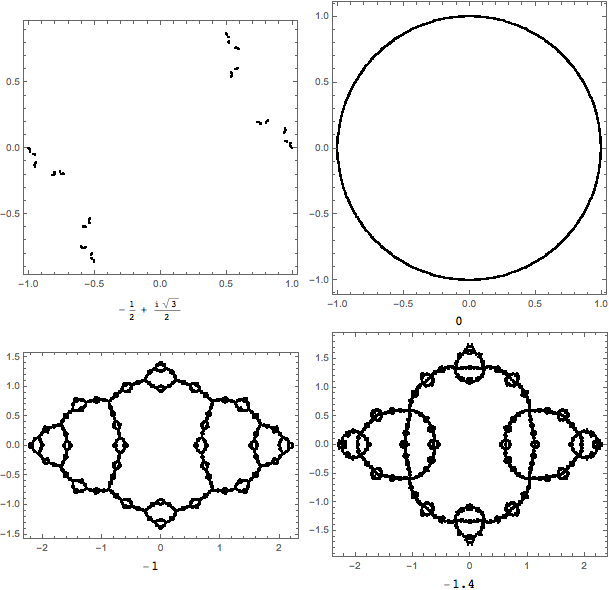 I've implemented all the above in Javascript and placed it here: https://www.marksmath.org/visualization/negabrot/.

To emphasize the difficulties inherent in this family, let's examine some dynamical behavior in that occurs in this family that cannot happen in the quadratic family, $z^2+c$. First, suppose that $c=-2^{1/3}$. Then, direct computation shows that under iteration of $f_{-2^{1/3}}(z)=z^{-2}-2^{1/3}$, we have $$-2^{1/3} \to -1/2^{2/3} \to 2^{1/3} \to -1/2^{2/3} \to \cdots$$ Not that the orbit is not periodic (the first point never repeats) but it has landed on a periodic orbit. Such an orbit is called pre-periodic. Furthermore, Theorem 4.3.1 in Beardon's Iteration of Rational Functions states that, if every critical point of a rational function is pre-periodic, then the Julia set of the function is the entire Riemann sphere. Thus, the Julia set of this function is everything!

Finally, let's consider the $c$ value $c=-1/2^{2/3}$, which lies on the left boundary of the period two disk in the figure of the parameter space above. For this value of $c$, the points $2^{1/3} + 2^{5/6}$ and $2^{1/3} - 2^{5/6}$ form a neutral period two orbit. Since there is only one critical point which must be lie in the immediate basin of any attractive or neutral orbit, the existence of a neutral orbit precludes the existence of an attractive orbit. Thus, this function has no attractive behavior at all, which makes drawing it's Julia set something of a challenge. I used the techniques outlined in the paper described in this answer. 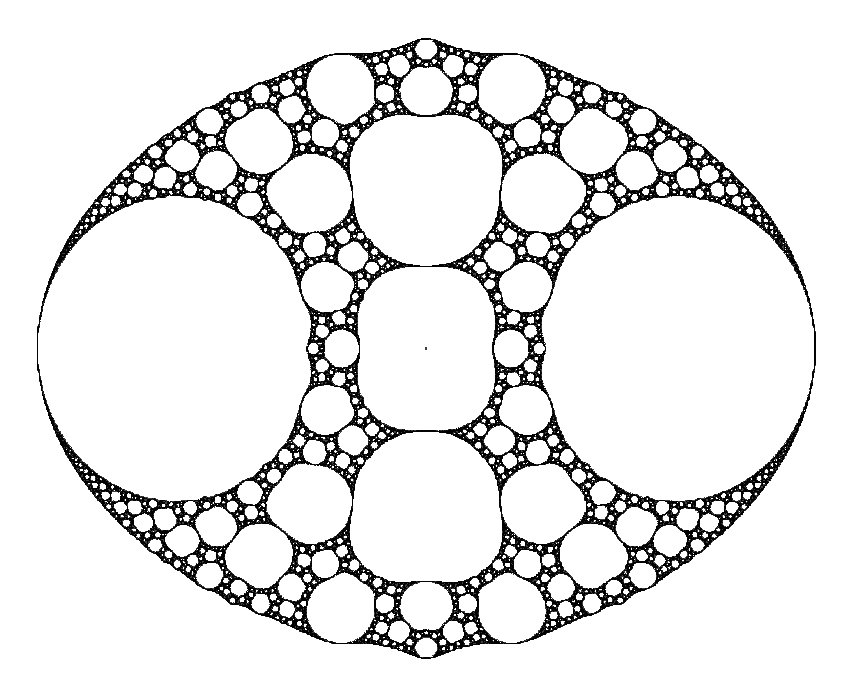 https://commons.wikimedia.org/wiki/File:Multibrot_Lupanov_power-2_Q1.png suggests using the Lyapunov exponent as a stability criterion, before performing periodicity checking for colouring.

The Lyapunov exponent $\lambda$ is:

The rationale is that if there is a periodic cycle, the contribution from the cycle will eventually dominate (the contribution of any finite number of iterations will tend to zero), so accelarate this domination by skipping the first $m$ iterations.

I tried plotting the Lyapunov exponent directly (yellow is negative, blue is positive): 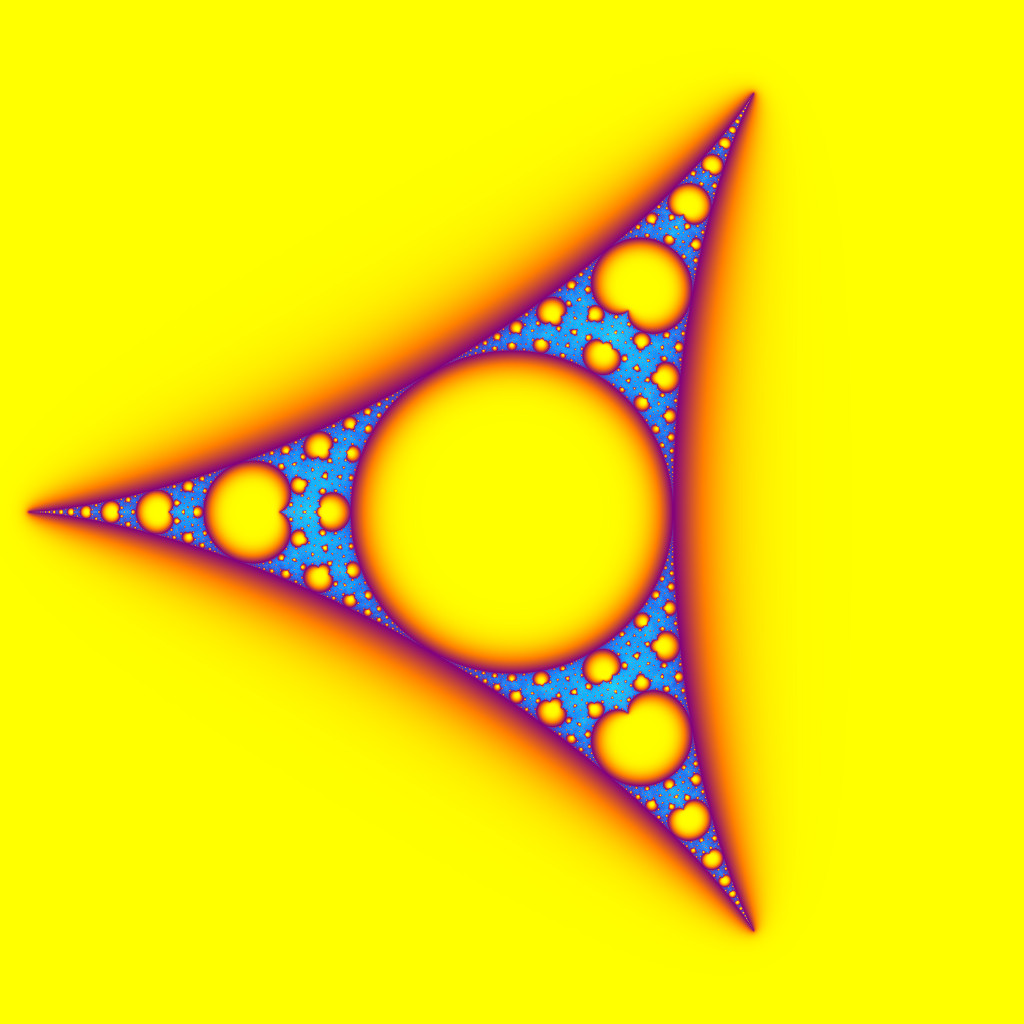 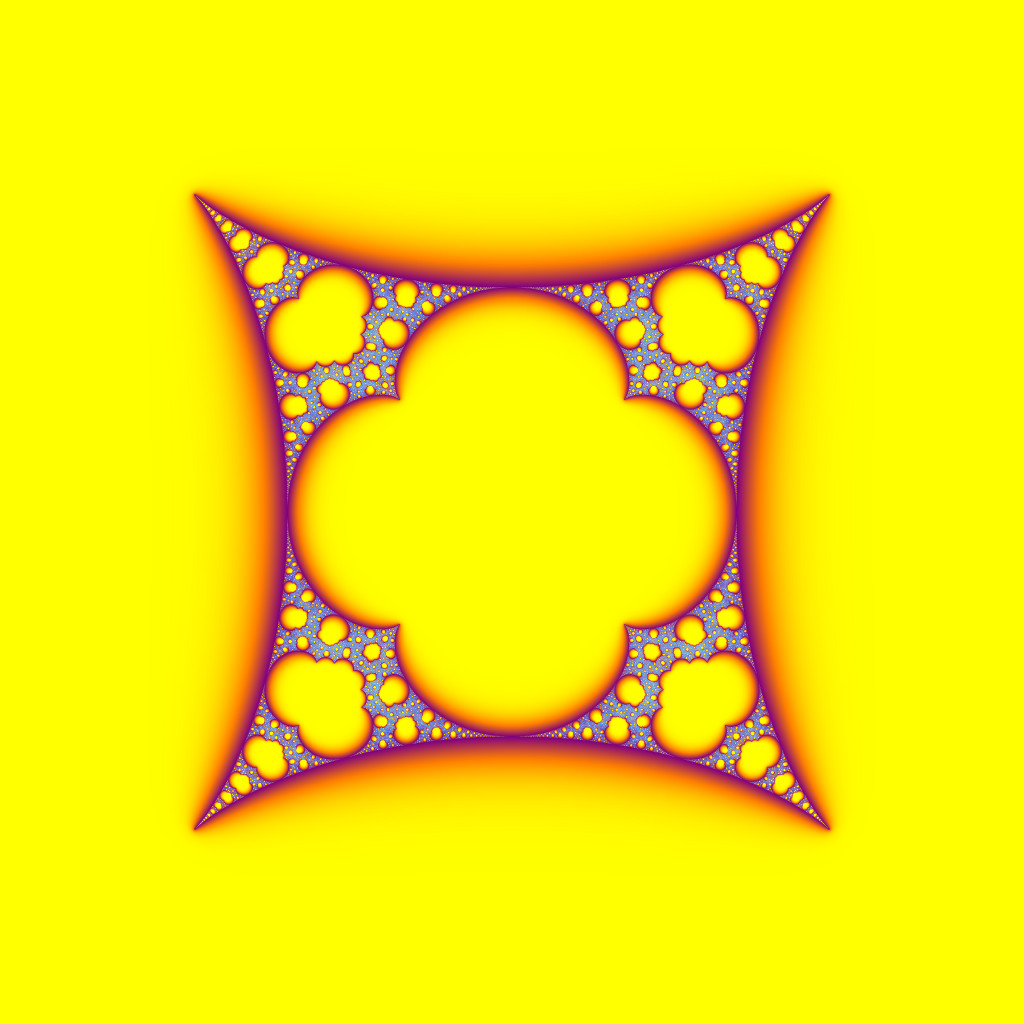 It sort-of works for Julia sets too (but the iteration count should be coprime to the period, and it takes some fiddling to find the right range of Lyapunov exponents to visualize; see comments in the source code below): 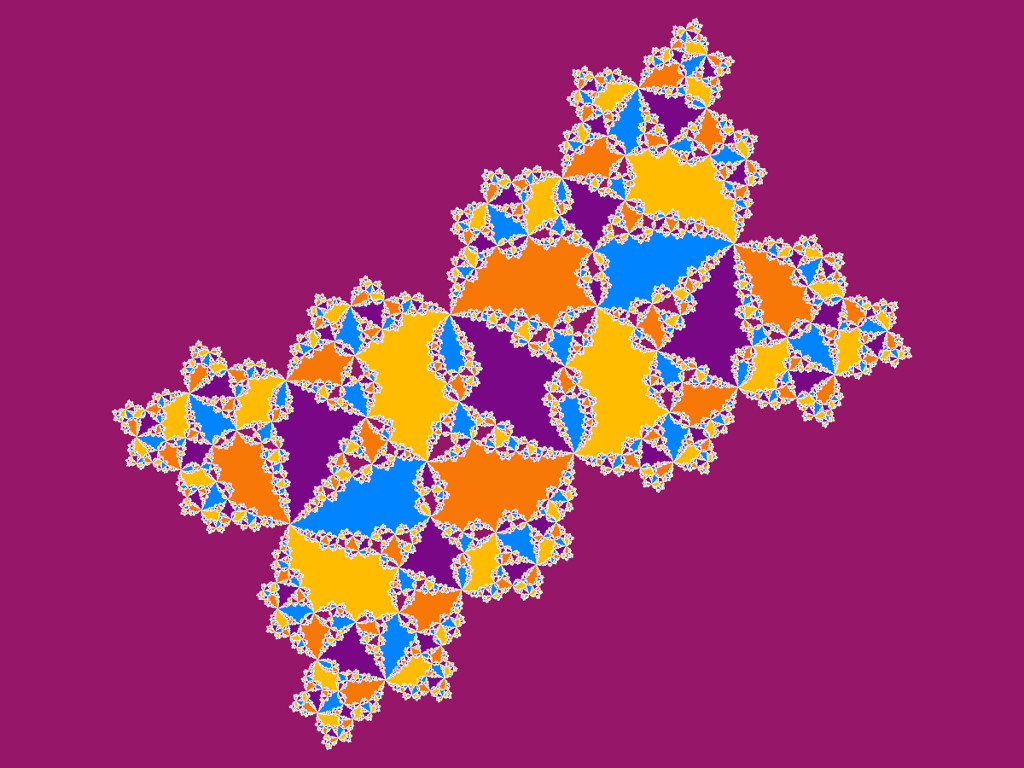 Here's the code I wrote using Fragmentarium as an OpenGL fragment shader host.

9
Mandelbrot set of $c \cdot \cos(z)$
4
What is the algorithm hiding beneath the complexity in this paper?
8
Symmetries of Mandelbrot sets with integer exponents