Number of limit points of a continued exponential

The sequences approach N-circles for high n. That is: a sequence with 5 limiting points will always iterate through these 5 points in the same order at high n.

The picture I created took about 15 hours of calculations and as you can see there are still a lot of black regions, where my code was not able to determine the number of limiting points (and there are some wrong colorings at the cardioid, but that is not too bad). This is mainly due to slow convergence. 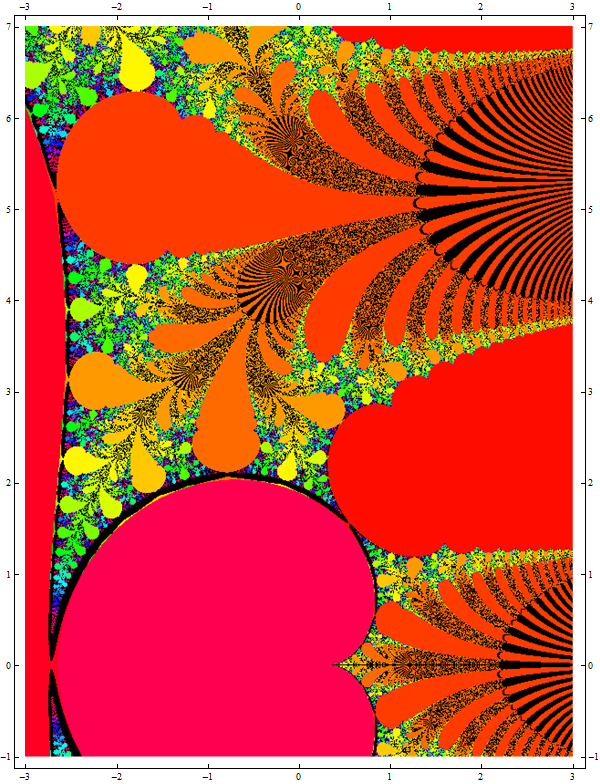 My question to you: do you have any idea how to quickly find the number of limiting points (ie faster than calculating the sequence until the pattern becomes obvious)? Is there a way to find all points for which there are infinitely many limit points ie. calculate the borders of these regions directly?

To clarify: what I am doing so far is to calculate something like 300 elements of this sequence and check whether $||a_N - a_{N-m}|| < \epsilon\cdot ||a_N||$ for some predefined $\epsilon$ and any $m$. Of course I could just check this repeatedly while calculating the elements, but I want something that is more efficient.

Outside all basins of attraction, you will have points that won't be attracted to any asymptotically stable periodic orbit. They might get into unstable periodic orbits, but are more likely to have infinitely many limit points if they don't go off to $\infty$. I don't see a way of calculating them all directly.

Not the answer you're looking for? Browse other questions tagged sequences-and-series complex-analysis dynamical-systems fractals or ask your own question.

31
Iterated exponent of $i$

3
Do there exist sequences with these properties and these limit points?
1
Deleted Exponential Series and Injectivity (1)?
4
Iterates of $f_b(x) = x - \log_b(x) $ - for $\log(b) \approx 0.399$: convergence to accumulation points or chaos?
4
M-set interior point probability on the real axis
20
Understanding this pattern behind the Fibonacci sequence
0
equivalent characterization of the complex exponential
1
Identifying the winding number of $C$ around points in the regions shown
4
Test to determine if a point is inside a cardioid whose cusp is not at the origin