I have two points, a known distance apart. At each of these points I have a sensor that gives me flow speed and direction.

Something along the lines of:

Is there a way to approximate the length of the path of a particle as it passes from point 1 to point 2?

There is no hope of making a justifiably good estimation!

Lacking any details about the path inbetween, an adequate guess would be to approximate the curve with a cubic Bezier curve, where $P_0$ is the starting point, $P_3$ the end point, and $\vec{P_0P_1}$, $\vec{P_2P_3}$ are proportional to the measured velocities. This still leaves one degree of freedom, so maybe we should pick the scale so that the length $|P_1P_2|$ is "compatible" with $|P_0P_1|$ and $|P_2P_3|$, for example their geometric mean. In principle, this finally determines a curve the length of which can be computed. However, the details of the computation are possibly more complicated than the little available input can justify.

So alternatively, especially in a situation like your example where the curve must have a point of inflection, one could try to fit in two touching circles with radii proportional to the measured speeds. However, this does not produce a unique curve either (though the length computation should be simpler)

So finally a very crude (or: quick and dirty) method: When moving along a line at an angle of $\delta$ against the straight connection, the effective "progress" in the intended direction is shorter by a factor of ${\cos\delta}$. Now let's simply assume that about $\frac13$ of the time, we move parallel to the direct connection (at a speed between the two measured ones), $\frac13$ of the time we move at the first measured speed and at a deviation against the straight line as measured there, and the remaining $\frac13$ of the time we move at the second measured speed and at a deviation as measured there. In your example, the "progress" made per $t$ seconds would be $$\tag1\frac t3\cdot(25\cdot\cos(220^\circ -245^\circ) +\tfrac{25+10}{2}+10\cdot \cos(230^\circ-245^\circ))\approx 16.605\cdot t$$ and the actual distance traveled along the curve in the same time would be $$\tag2\frac t3\cdot(25+\tfrac{25+10}2+10) =17.5\cdot t$$ We need to pick $t$ so that $(1)$ produces the given distance of $15$ meters and then $(2)$ shows the result. This way we estimate the curve length as $$ \frac{17.5}{16.605}\cdot 15\,\text{m}\approx 15.8\,\text m.$$ As said above, this method is very quick (really not much calculation involved) and dirty (approximations made that could make a physicist happy, but certainly not a mathematician) and I won't rely on it in cases where the start or end dirction deviate substantially from the straight direction (the $25^\circ$ as in your example may still seem reasonable, maybe even up to $45^\circ$) and/or where the initial and final speed differ substantially (your example has a factor of $2.5$, which may or may not be considered reasonable; certainly a factor of $10$ would make the estimate totally untrustworthy).

It seems to me that you'd need more information. I drew this in GeoGebra based on what you wrote: 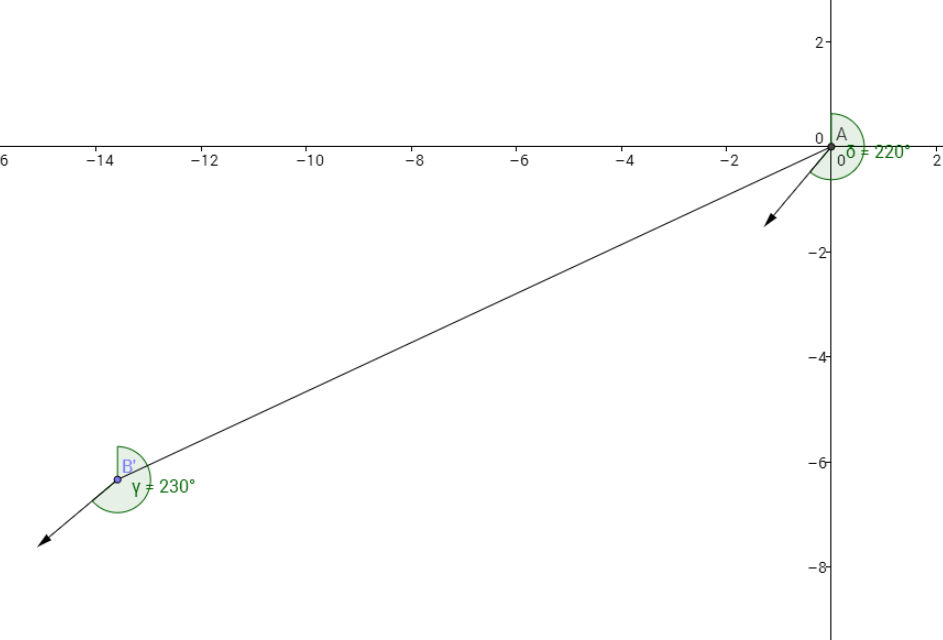 The particle starts at point $A$, goes through some unknown path, and ends at point $B$. The larger angle between the $y$-axes and the segment $AB$ is $245^{\circ}$.

The shape of the path could be so many different things that it is impossible, given just what you've told us, to approximate the length of the path. However, if you found out that the jerk was constant, or some other bit of information, it would be easier.

If you pressed me to guess the length of the path I'd throw out something like $20$ meters, just because it has to be a little bit longer than $15$ ...

Not the answer you're looking for? Browse other questions tagged linear-algebra geometry algebraic-geometry or ask your own question.

3
linear least squares minimizing distance from points to rays - is it possible?
2
How to make a formula that will interpolate a curved line graph?
6
Calculate connecting line and circular arc between two points and angles
0
Smooth path between two points with given turn rate and initial and final direction
1
Triangle angle calculation knowing only one angle
0
Find lat/long on a straight line between two other coordinates
7
On a sphere, does a rhumb line always exist between two points? If so, how to calculate it?