Representing a 3D Hilbert Curve as an L-system

A 2D Hilbert curve can be represented as the following L-system:

How would I go about finding the 3D L-system equivalent of the space-filling Hilbert curve?

Here is code from my L-system processing system. I hope the syntax is self-explaining (for someone who knows L-systems). 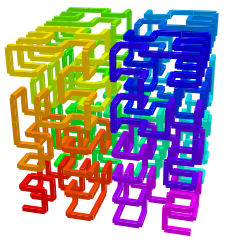 Unfortunately I don't know source of this concrete L-system. I probably found it using google. Also it may not be original Hilbert curve since there are more ways how to fill cube with poly-line. But I will try to explain how to construct something like this.

Notice, that X will yield to cube but it will not change the orientation after interpreting it (it behaves like ordinary line – orientation at beginning is the same as at the end and one step ahead). To test this behavior, rewritten X and F must end in the same place with the same orientation.

Than from cube you want larger cube. This can be achieved by copying our first cube 8 times (to all 8 vertices of cube). The lines from first iteration will "connect" our new 8 cubes to one poly-line. Sou you just need place X (which yields to cube) to appropriate places (to vertices, between edges). In following rewrite rule, X are placed randomly just to illustrate the result.

The tricky part is to achieve that each cube will be generated to appropriate place (in correct orientation). You need rotate turtle before interpreting X to correct position to place the cube (which will be created from X) in correct orientation. I leave the corrections up to you :)

Hint: Imagine that F is line and X is do the same change in space like F (moves forward) but it draws cube to some direction as a side effect.

EDIT: L-system of 3D extension of Hilbert curve can be also found in The Algorithmic Beauty of Plants on page 20. This awesome book about L-systems can be downloaded from algorithmicbotany.org.

13
Hilbert curve, understanding the original article
9
Why should Gaussian noise have fractal dimension of 1.5?
1
Geometric generation principle form constructing the Hilbert Curve
4
How can I find the value of this [pathological] function?
2
Does there exist an L-system for the sierpiński curve