Pseudo Proofs that are intuitively reasonable

What are nice "proofs" of true facts that are not really rigorous but give the right answer and still make sense on some level? Personally, I consider them to be guilty pleasures. Here are examples of what I have in mind:

It might be helpful to indicate where the lapses in rigor are and why the method works anyways.

Issues. One problem may not be obvious... the equation "$f(A)=0$" is really saying that the matrix we get via the evaluation (by identifying the underlying field with the subring of scalar matrices) is the zero matrix. However, the "proof" claims to prove that $f(A)$, which is supposed to be a matrix, is equal to the value of a determinant, which is a scalar.

As to why it "gives the right answers"... well, because the theorem is true. I am reminded of what Hendrik Lenstra once said in class after presenting an idea for a proof and explaining why it didn't quite work:

The problem with incorrect proofs to correct statements is that it is hard to come up with a counterexample.

This is one that comes up on math.SE from time to time.

Of course the problem with this proof is that the map is not well-defined since numbers do not have unique binary expansions, e.g. we have $0.1 = 0.0111...$.

"Proof 2." Repeat Proof 1, but this time don't allow any terminating binary expansions except $0.0$; instead, when a number has two binary expansions, pick the one which ends with infinitely many ones.

A neat fix is just to show that $[0, 1]$ has the same cardinality as $\{ 0, 1 \}^{\mathbb{N}}$, which is straightforward to do by Cantor-Bernstein-Schroeder, and then the above argument actually works.

i.e. a list is either empty, or it has one element, or it has two elements, or it has three elements, etc. Which is true, despite that fact that we used subtraction and division in our "proof", neither of which are valid operations in a semiring.

The fact that this "proof" works is surprisingly deep, and has ties to category theory. This paper by Fiore and Leinster proves the result, showing that for some cases, proofs that 'pretend' the objects under consideration are complex numbers give valid results for semirings, monoids, rings and other classes of algebraic structure. Among other things they show that there is a bijection between the type of binary trees $T$, and the type of seven-tuples of binary trees, $T^7$, i.e. that

if you allow yourself free access to field operations.

Euler's formula for plane connected graphs states that V + F - E = 2. Cauchy gave a proof of this that is very appealing but not "rigorous." For simplicity also assume the the plane graph G is 2-connected.

Suppose the graph G is embedded into the plane and consider the quantity: Q = V + F - E. If any face other than the infinite face is not a triangle, add internal diagonals using existing vertices to make that face a triangle.

It is easy to see that as each diagonal is added we increase F and E by 1 (V stays unchanged) but since these terms in Q have opposite signs Q remains unchanged. Now starting with the edges which bound the current plane graph (all internal faces triangles) remove triangles one at a time until one gets down to a single triangle. These reductions either involve removing a single edge (and Q will be unchanged by this operation) or removing two edges of a triangle that meet at a 2-valent vertex (and Q will be unchanged since V goes down by 1, E goes down by 2 and F goes down by 1).

Since after all reductions the value of Q is the same as at the start and the result is a triangle for which V + F - E = 2 holds, we can conclude that V + F - E = 2 for any such graph.

This way of proving Euler's polyhedral formula can be made rigorous but it requires more work to do it fully correctly.

The problem here lies in equations marked with (!), because they are meaningless as they stand. However, they may be interpreted as placeholders for rigorous approximation processes: for example, the proof goes on fine if we start with

In what follows, the fourier transform used is $$ \widehat{f}(\xi)=\int_{-\infty}^\infty f(x)\,e^{-i2\pi x\xi}\;\mathrm{d}x $$ Suppose we have a probability density function, $\phi$, which has a mean of $0$ and a variance of $1$ (this can be achieved by translation and scaling). Then, the following are true for the fourier transform of the pdf:

Thus, to second order, the fourier transform of the pdf looks like $$ \widehat{\phi}(\xi)=1-2\pi^2\xi^2\tag{1} $$ The Central Limit Theorem looks at the sum of $k$ random variates contracted by $\sqrt{k}$ and scaled by $\sqrt{k}$. This maintains the unit integral while compensating for the increased variance due to summation.

"Proof" of the Gaussian distribution.

One can derive the (univariate) Gaussian from the binomial, but I think the usual and historical approach is to begin with "basic assumptions" and go from there. (This is a typical note.) We assume a "large number of errors, of equal magnitude, equally likely to be positive or negative."

These assumptions are meta-mathematical. As one author put it, "mathematicians...think physicists have verified it and physicists...think mathematicians have proved it theoretically." $^*$

The usual proof of the Gaussian is therefore not a proof at all, but a mathematical edifice constructed on intuition about random errors. Because the intuition is informed by experience, the idea works, is plausible, but it really doesn't qualify as a proof. 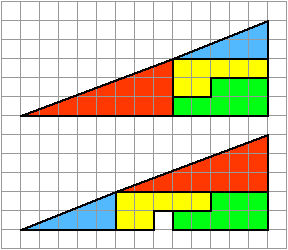 286
Can't argue with success? Looking for "bad math" that "gets away with it"
173
How to prove Euler's formula: $e^{i\varphi}=\cos(\varphi) +i\sin(\varphi)$?
79
Are these solutions of $2 = x^{x^{x^{\:\cdot^{\:\cdot^{\:\cdot}}}}}$ correct?
32
"Too simple to be true"
17
Intuition about the Central Limit Theorem
19
Why do people interchange between $\int$ and $\sum$ so easily?
4
Derivative of a composition
7
Probability of picking a specific value from a countably infinite set
5
Puzzle on the triangle.
16
successful absurd formalities
See more linked questions

16
successful absurd formalities
38
What is the most surprising result that you have personally discovered?
13
What are the uses of "squeezing"?
41
What are some theorems that currently only have computer-assisted proofs?