I am trying to calculate the inverse Laplace transform of a probability distribution, and while I don't believe I can get a closed form expression, I would like to get an idea of the general shape of the distribution. The Laplace transform is a nice rational function, however, the roots of the denominator are the inverse (I mean $1/z$) of the following $$\frac{z^n-1}{z-1}=b$$

where $b>1$ and real. What can be said about the zeros of the polynomial? Are they all real, what is their degeneracy? Are there any $b$ derived bounds on the roots (i.e. do they all fall in a circle of radius $2b^{1/n}$ for example-- I know it is not true, just giving an example)? 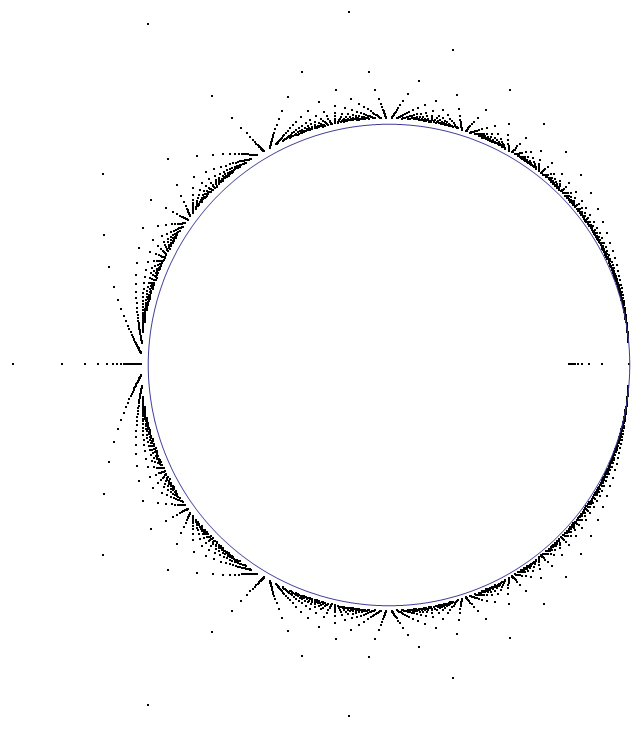 It appears that there are no limit points outside of the circle of convergence, which I believe follows from the fact that the reciprocal polynomials of the partial sums at the top of this answer converge to $1/(1-z)$ inside the unit circle, which has no zeros.

(The above should be read in the context of Hurwitz's theorem, which essentially says that any zero of the limit function which is inside the circle of convergence will be a limit point of the partial sums.)

Lastly, if I had to guess the rate of convergence of the zeros to the unit circle, I would say they approach at about $O(1/n)$ based on working with similar problems.

Not the answer you're looking for? Browse other questions tagged polynomials roots or ask your own question.

12
Rational Roots of Riemann's $\zeta$ Function
19
What are the properties of the roots of the incomplete/finite exponential series?
0
Laplace Transforms/Differential Equations using MATLAB
1
When do non-real roots of polynomials P(x) and R(x) have a real component in common?
1
Algorithm for determining all the zeros of a complex rational function without initial guesses
2
Geometry of roots of a polynomial with real coefficients
0
Does Newton's method give all the real roots?