How to read a cycle graph?

As an important tool for visualizing some small finite groups it is useful to know how read such graph, and with time trying to make sketch of them by my own.

I would like to know, for a start, how to read properly the cycle graph of the symmetric group of order 3? 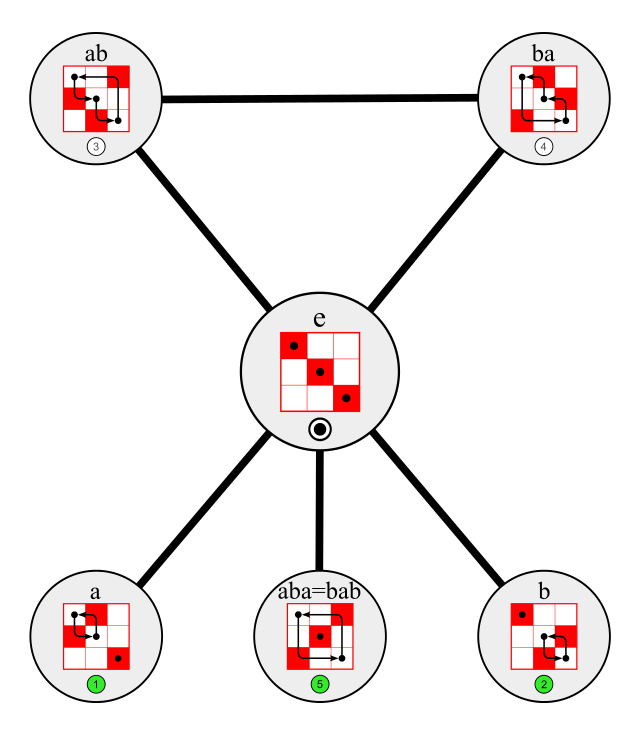 Three of the elements in your example have order 2. ($a, b, $ and $aba=bab $). Each of these corresponds to one of the leaves at the bottom of the figure. For example the lower left node represents the cycle for $ a $, which consists of nodes $ e, a $, and then returns to $ e $ because $ a^2=e $. Properly speaking these leaves should have one edge on each direction, but we abbreviate the two edges to one to avoid clutter.

The other stuff in this diagram is nonstandard stuff that the somewhat eccentric author made up. Don't worry if it's not clear; this author is notorious for that.

I don't think I can answer everything that is in this graph, but we can make a dent. First of all, since this is the symmetric group, if we interpret matrix entry $m_{1,1}$ as element 1 of a set, matrix entry $m_{2,2}$ as a second element of a set and so on, then the arrows show the group acting on that set. So there are no arrows on the identity, which acts trivially on the elements. The red and white squares show a 3-dimensional representation of the group. Furthermore, the levels in the graph (2 on top, one in the middle, 3 on bottom) come from the order of the different elements.

I cannot answer why the elements were numbered the way they were, or why some of the numbers are green instead of grey.

Not the answer you're looking for? Browse other questions tagged group-theory visualization or ask your own question.

4
Cycle index of a permutation group acting on k-subsets
4
Is the number of elements$g$ in a finite Abelian group $G$ such that the $| g|= k$ always equal to a multiple of $\varphi(k)$?
0
Proving that $n$-cycle has order $n$
5
When mathematicians study specific classes of groups how do they chose which realization of them to use?
2
How in general does one construct a cycle graph for a group?
6
Why does representing groups as linear operators provide insight about the groups themselves?