How to calculate radius of a spherical surface having four circles touching one another? 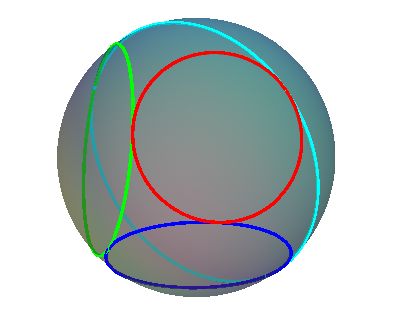 Then we can find the area $\Delta$ of each triangle. To do so we find the angles using the spherical law of cosines, and then the spherical triangle area formula (see this answer).

Sorry, this is not a complete answer, but I don't have enough reputation to simply comment. As a starting point I think you need some constraints, for example, it appears from the image that each circle touches all three other circles - I will assume that this a requirement. Also, as long as it is not necessary that $r1,r2,r3,r4 < R$, then perhaps it would simplify things to consider the special case of $r1 = R$, and then $r2,r3,r4$ reside in a hemisphere (assuming that all circles must touch three other circles).

Not the answer you're looking for? Browse other questions tagged circles surfaces or ask your own question.

1
Area of a Spherical Triangle from Side Lengths

2
finding one circles radius so that it tangentially touches two other set circles
3
Twelve identical circles touching one another on the surface of a sphere
1
Apollonian gasket
2
Prove that $\frac{1}{r_1}-\frac{1}{r_2}=\frac{2}{a}+\frac{2}{b}+\frac{2}{c}$
0
A problem on four kissing circles (Descartes Theorem)
1
Find the center of a third externally tangent circle
0
Radius of the smaller circle
2
How long is this line making a loop?