What does the solution of a PDE represent?

So I took a course in PDE's this semester and now the semester is over and I'm still having issue with what exactly we solved for. I mean it in this sense, in your usual first or second calculus course you are taught the concept that your second derivative represents acceleration, your first derivative represents velocity and your fucntion is some of position function. So in the world of PDE's what does the function U(x,t) really capture? Your derivatives model rates of change of a phenomena in a broad sense, but what does the soultion model? So for example the solution of the Heat equation is your U(x,t) function modelling temperature? or or what is the solution to the wave equation modelling? Are these some sort of "position functions"? I ask because I'm going over Green's equations and the relationship with the Dirac function and I'm trying to wrap my head around what is being described. I understand the steps towards a solution, but it is the description of what is occurring which is faltering and essentially is the important part behind why we do mathematics. Also is there some sort of visual representation of these solutions? Thanks

What the function you get in the end represents depends on your problem. One thing to note is that a certain equation, just expressed as a PDE, might appear in several different application problems.

The mathematical problem for PDEs is how to get a closed-form solution for a PDE or how to integrate the PDE numerically in a computer, etc. What it is used to model is more of an engineering problem (or rather, the problem of finding what equation describes a certain phenomena is engineering). This might lead to a disconnect between what things mean in the "real world" and how to get the mathematical results that you can do something with.

That said, I often find it very useful and motivational to find in which engineering or scientific problems certain mathematical things appear. In my experience, this is often glossed over in mathematics classes, and focused too much on in engineering classes.

Using the example of the heat equation, the solution $u(\mathbf{x},t)$ is the temperature at position $\mathbf{x}$ at time $t$. See for example the figures in this link. 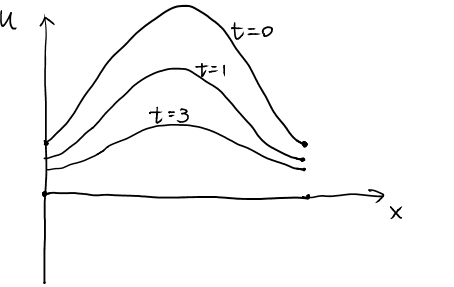 Suppose a rod was heated at the middle point and we measured its temperature afterwards. The temperature would be like this. And this could be the solution of a heat equation.

The solution is just a function. That's what you're aiming for at the end. E.g. in the 1D wave equation, you get $u(x,t)$. You know what a function is right? For the solution to the wave equation, you plug in the position on the x axis and the time and $u(x,t)$ will tell you the amplitude of the wave at that position at that point in time. That's all there is to it really.

There are tons of situations where the solution of a PDE discribes the behaviour over time:

6) water level in a bucket with a leak

7) Temperature of a heated house

Not the answer you're looking for? Browse other questions tagged ordinary-differential-equations pde math-history education fundamental-solution or ask your own question.

3
Steady state solution of diffusion-decay PDE.
1
Find a general solution of the PDE for $u=u(x,y)$ by using ODE techniques.
1
Rewriting the heat diffusion equation with temperature dependent diffusion coefficient to include joule heating.
2
Interpreting differential equation models
1
Limiting solution profile of nonuniform transport equation
2
Uniqueness of Solution for Boundary Valued Problems
0
Function satisfies the differential equation at a point but it's not included in the solution