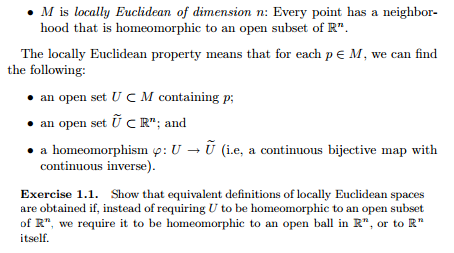 I am working on exercise 1.1 and I think the way to do this would be to show that open sets are homeomorphic to $R^n$ or open balls in $R^n$. Is this even true? I'm not sure how to go about proving it.

btw, the exercise is from Lee's Smooth Manifolds book.

Not the answer you're looking for? Browse other questions tagged general-topology manifolds differential-topology or ask your own question.

2
Show that 2 sets are not homeomorphic
3
Equivalent definitions of manifolds
2
Whitney sum of smooth vector bundles
2
Are open sets and open balls the same thing?
3
Extension Lemma for Smooth maps (Lee vs. Lee)
3
Are topological manifolds with boundary metrizable?
1
Smoothly homeomorphic for invariance of domain and invariance of dimension
2
Exercise 5.20 from John Lee's ISM. Every open subset of a immersed submanifold $S$ in the subspace topology is also open in the submanifold topology