Triangle containing most points from a set

I considered brute-forcing or taking some sort of rotating calipers-style approach amongst the points of the convex hull of the point set, but it wasn't clear to me if that approach was even provably valid---the maximum area triangle clearly uses three points in the convex hull, but I couldn't think of a way to reason about the sort of triangles I need.

That approach is provably wrong, as one of the answers shows. How about picking an arbitrary triangle and iteratively replacing each vertex with its closest neighbor not in the triangle, if that replacement increases the number of points in the triangle? Still brute forcey, but better... maybe? I'm also not sure if that's actually correct.

Edit: per the comments, the set of points is finite, and by "a triangle connecting three points of the set" I do mean a triangle whose vertices are points in the set.

Second edit: I would prefer a better-than-brute-horse approach if possible.

This is only an extended comment on one of the approaches proposed by the OP.

The drawing illustrates that focusing only on the extreme points is not valid: a triangle using only red points would miss several points, whereas the triangle using the blue dot misses only two points. 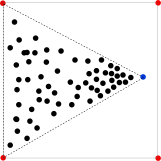 The brute-force approach is $O(n^4)$ where there are $n$ points: enumerate each triangle, and check each point for being inside.

Not the answer you're looking for? Browse other questions tagged geometry optimization convex-analysis triangles or ask your own question.

5
Largest Quadrilateral from a Set of Points
9
Area of the given triangle
0
What is the shape of all convex combinations of $\geq$ five vectors in $\mathbb{R}^3$?
2
Smallest Convex Hulls ($n$-Simplex) of $n+2$ Points in $\mathbb{R}^n$
0
Must every convex compact set have extreme points?
1
Prove that the convex hull is the union of all the triangles determined by triples of points from X
3
Justification for expression for Convex Hull