How to develop an intuitive feel for spaces

I'm a physicist who's currently delving deeper into what I would call more 'hardcore' maths (e.g. FEM and control theory). Every now and then, I come across various spaces, such as vector spaces, Hilbert spaces, Hardy spaces, Banach spaces, topological spaces etc. I can read the definition, and sometimes I understand it, other times I don't (even the wikipedia articles can sometimes be very technical).

But more importantly, I very rarely have an intuitive understanding of what these spaces really represent. Why are they important? What makes them different from another space? Should I really care?

Are there any good (online) sources or tricks of the trade to wrap your head around the important things about a newly encountered space? I don't think I will ever delve deep enough into this to be really proficient with the underlying maths, but I would love to be able to distinguish the importance and meaning of these spaces...

I've put some semi-sensical tags on this question, but anyone with more knowledge is welcome to change the tags to something more useful.

I'm an engineering/physics student but I've also had to teach myself about certain types of spaces. I think the most important spaces to learn first to orient yourself are topological, metric, and vector spaces. Many spaces I've come across are special cases or combinations of these.

If it's worth anything, this is my intuition for them:

Topological spaces are made of collections of points called open sets, which are like overlapping "patches" of points that cover the space. Continuous functions are maps between topological spaces that preserve open sets in the sense that open sets can be stretched and deformed without being torn apart.

This is what a continuous map between two topological spaces looks like, with the inverse image an open set also being an open set: 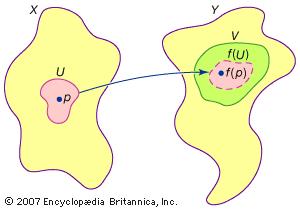 Metric spaces are collections of points with a distance function called a metric defined on them so that any two points have a distance between them. It turns out that all metric spaces are also topological spaces since we can use the metric to define open sets as "balls" of various radii around any given point.

Here are examples of different metric functions that can be defined on $\mathbb{R}^2$ and their corresponding "balls" of radius $L$:

One of my favourite examples of vector spaces (specifically Hilbert spaces) is the use of the Fourier series to construct periodic functions out of a linear combinations of sinusoids:

A quick note: A 'space' is an arbitrary set of 'things' but with an additional structure or property. A metric space is a set where you can measure distances between two points, but you have to know the properties of the distance because they can get arbitrarily complicated (e.g. p-adic distance).

So examples or explainations from others can help, but from my experience I only get good a good intuition when I worked long enough with a certain definition. (Which means a lot of technical work.) But if you want to understand what those definitions mean, I suggest looking at as many different examples as you can and comparing them. First the 'obvious' examples for getting into it then step by step more pathological examples. Always keep in mind that the same structure can have very different properties. E.g. $\mathbb R$ can be considered as a group, ring, field, vector space, normed space, metric space, banach space, hilbert space e.t.c. And often the big benefits come from using different properties combined.

I would say it is almost impossible to get a good feeling of various kinds of spaces just by reading the definitions. Historically, those notions are not developed immediately by somebody in a dream or something like that. Instead, those concepts are formulated gradually. The concept of a manifold is a direct example.

So, how these concepts are formulated? I would say a key ingredient is examples. First, people are interested in a class of objects that seem to share some common property. Then, by induction, analogy, observation, trial and error, and so on, the concepts finally come to existence in the finest form we are aware of. For instance, the concept of a differentiable function maybe common in our time. But, there is one time people thought every continuous function is differentiable.

Just familiarize yourself with more and more examples of those concepts to which you are new until you feel they are natural.

This was going to be a comment but turned out to be a bit too long:

The way I look at it is that a space is just a set that has some extra properties that give it some structure. E.g. the $L^p$ space (Lebesgue) is the set of functions that satisfy $\|f\|_p \equiv \left({\int |f|^pdx}\right)^{\frac{1}{p}}<\infty$. You can think of this as just a bag of functions, all satisfying this property.

Also, I wouldn't call control theory or finite element methods 'hardcore maths', they're very applied, and are more in the domain of engineers. But you're right, control theory definitely does use a lot of examples of spaces, like vector spaces, Hardy spaces and Lebesgue spaces.

23
What's an intuitive way of looking at quotient spaces?
3
Intuition on the definition of "rational maps"
37
How to develop intuition in topology?
4
Getting an intuitive feel for induced representations
5
condition for equivalence of norms on vector spaces
1
Non-separability of normed spaces
2
Infinite-dimensional normed spaces have infinite-dimensional dual spaces
2
Sequence spaces are subsets for p<q
9
Intuition on how $L^2$ difer from $L^1$ Lebesgue function spaces
9
How to "feel" semidirect products