I have two planes in $\mathbb R^3$ as shown below: 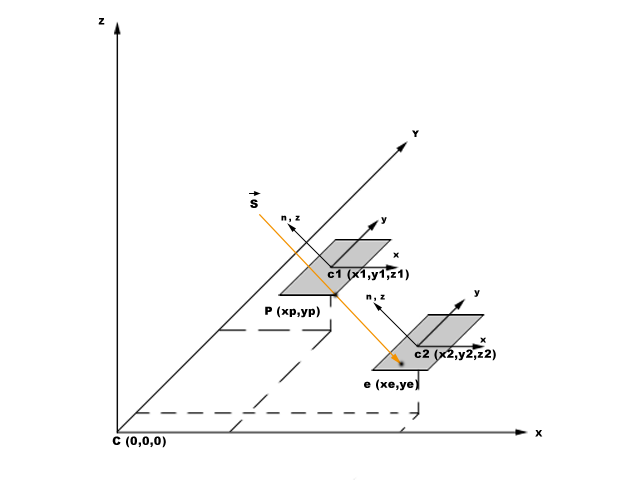 Each plane is a finite area, a rectangle with length and width $H_l, H_w$. Each plane has its own coordinate system, with $x,y$ axes parallel to plane edges and origins of $C1_, C_2$ at $ plane_1 , plane_2$ respectively.

Two points $P,e$ belong to plane 1 and plane 2 respectively. Each point is described with respect to the plane's coordinate system.

Which are the "e" point coordinates ($x_e$,$y_e$) with respect to the coordinates system of the plane it belongs ($plane_2$)?

I have the following data available:

In order to solve the problem:

Is the above solution right? How can I transform the points between the coordinate systems> Is there any smarter/quicker way to find point $e(x_e,y_e)$?

Is the above solution right?

Looks good to me. Plugging the parametric form of the line into the normal form of the plane is the core of the intersection.

How can I transform the points between the coordinate systems

To do this, you need all three unit vectors of the local coordinate system of each plane. The normals are not enough, since you might rotate the local $x$ and $y$ axis around that normal. Perhaps that azimuth and elevation you have might be of use, but to my knowledge, azimuth and elevation describe a single direction, and you didn't say what direction these describe. If it's the direction of the normal vector, you are out of luck. If it is, however, the direction of the $x$ axis, you could turn that into a unit vector pointing in that particular direction to establish the full local coordinate system.

With quite a bit of background from projective geometry, and in particular using Plücker coordinates, you could come up with a different solution which might be more elegant in some respect, but the practical difference would be negligible here, and the amount of extra knowledge needed to understand things would be rather large, so I'd not suggest a projective approach at this point.

What you can do is combine things. You can write your equation of the plane as a dot product. That way you can write $t$ explicitely as some expression involving dot products. You can write the two products for the conversion to the local coordinate system of the second plane as a matrix multiplication. Then you can split everything up so that you separate the input variables $x_P$ and $y_P$ and end up with a single affine transformation which maps $(x_P,y_P)$ to $(x_e,y_e)$. This is useful if you need to transform many points between the same pair of planes.

Not the answer you're looking for? Browse other questions tagged linear-algebra geometry transformation coordinate-systems or ask your own question.

0
Finding equation of plane containing line of intersection
1
Transform from global coordinate system to a local
1
Does a line intersect a box in a 3D space?
0
Is a point on a plane part of a face on the plane?
1
3D point projection on 2d plane using normal vector and projection vector
3
Given two points with 3D coordinates, and three angle observations, how to caculate the coordinate of the third point
0
Intersection of yaw pitch vector with plane
1
How to calculate the intersection point of a vector and a plane defined as a point and normal vector?
0
Intersection Between a Line and a Cone