Is a compact set an union of a finite number of disjoint closed intervals?

I think it is true for $\mathbb R$ with usual metric. How about others? How to prove it?

Motivation: I got this idea when I was reading a proof for Lebesgue's Criterion of Riemann Integrability, here it is: 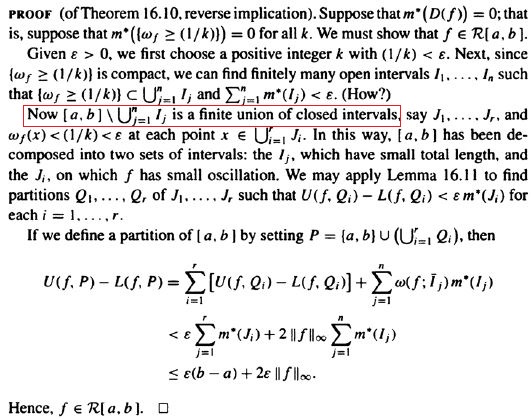 P.S. here is the definition of Lebesgue outer measure of Carothers' Real Analysis:

No. See the Cantor set, which contains no proper interval.

For a less pathological example than the Cantor set, consider

I think I've fully understood this question. Yes, Przemysław Scherwentke's answer here is correct. However, [$[a,b] - \mathop {\cup}^{n}_{j = 1} I_j$] is more complicated than the general title coz $I_j$ and [a,b] both are intervals here(distinct by open and closed) that means they all have interiors that are not empty. Since {$j$} is finite, that means if {$I_j$} are disjoint each other, it will be trivial to show a finite union((n+1) elements) of closed intervals; Otherwise, suppose {$I_j$} have been rearranged from small to large by values of left endpoints. Without loss of generality, there exist $I_k$ and $I_m$ are not disjoint that imply the interval between left endpoints of $I_k$ and $I_m$ will be covered by $I_k$. Apparently, a finite union(less than (n+1) elements) of closed intervals are trivial again. Indeed, {$I_j$} is a cover for all points whose oscillation equal or greater than $1/k$, so it should be chosen as disjoint each other as possible.

Not the answer you're looking for? Browse other questions tagged real-analysis analysis lebesgue-integral lebesgue-measure or ask your own question.

3
On Lebesgue Outer Measure of an interval
0
Riemann integrability of indicator function of compact subset of a closed interval
4
What's the relationship between continuity property of Lebesgue measure and continuity on a metric space?
2
Prove that $m^*$ is countably additive on the family of open subsets of $[0,1]$
4
Approximating a Lebesgue measurable set by a finite union of intervals
4
Integrability of composite of Riemann integrable functions given condition