Where could (do?) we go after exhausting greek letters?

I'm still in high school but after all my various math and science classes including calculus, statistics, geometry, and physics, I think that we've pretty much run the course of both upper and lower standard letters, and upper and lower greek letters.

The problem has become more apparent to me in statistics, where there seems to be an absolutely ridiculous amount of variable overloading in various equations.

Where could mathematicians go for new symbology to lessen this overloading? Greek letters are nice because they are foreign enough to most people that they seem appropriate for math yet familiar enough that they do not distract from the math in the way a more artistic lettering like Arabic would.

What is an alphabet with enough unique characters in it that is feasible to use in such a situation?

Is there any kind of push for such a thing?

I mean, I understand that context is the biggest identifier in symbol meaning, but at some point as concepts gain importance, these symbols become somewhat like a reserved symbol, such as pi.

You'd get some confused students if you tried to use upper case sigma or pi as a standard variable.

Dr. Seuss to the rescue!

From On Beyond Zebra:

Why stop at alphabets? There are over 74,000 currently defined Unified CJK Ideographs is unicode.

For that matter, why stop at written representations of standard languages? Symbols from music have already been widely accepted in differential geometry, and the comprehensive LaTeX symbols list contains many more possibilities: a close friend and collaborator of mine has managed to sneak lightning bolts (see pp 18) into an actual journal publication.

Symbol overloading is not as big a problem as you think, by the way. To take your own example about $\Sigma$ and $\Pi$, it appears you are not familiar with descriptive set theory.

For my mathematical output I have $2$ of each of the following alphabets at my disposal: italic, bold, sansserif, Fraktur, then $1.5$ greek alphabets, $1$ blackboard bold, and $1$ calligraphic, making a total of $11.5$ alphabets.

Note that $99.5\%$ of mathematical text live in a certain context, as algebra, or logic, etc. Therefore, if some algebraic number theorist has used a Fraktur emm in a paper of 1937 this should not detract a statistician from using such an emm in 2015, if this seems appropriate to her.

Anyway, there is still a lot of bad notation around. It has nothing to do with alphabets. The worst of all is the symbol $|$ for "divides". Another is using the letter $f$, the "$x$" for indetermined function individuals, as "operator" creating the probability distribution function of a random variable $X$. In this way the relevant data, namely $X$, and maybe the underlying measure ${\rm d}x$, are relegated to "index level", or are not made visible at all.

Where could mathematicians go for new symbology to lessen this overloading?

There is always the option of adding certain marks to existing letters to make them appear different. $\pi$ may be $3,14...$, but that doesn't mean $\hat\pi$ couldn't mean something different. Rotation of existing characters may also be used, like in $\exists$ and $\forall$. Or simply changing their appearance like $\mathbb{N}$ instead of $\mathrm{N}$.

What is an alphabet with enough unique characters in it that is feasible to use in such a situation?

If you're not willing to use Arabic letters, for whatever reason, and want to use letter resembling those in the English alphabet, you may use the "extended" latin alphabet. Some symbols like $\emptyset$ comes from here.

There is not really anything wrong with Arabic letters though, it sounds like you just don't like the font you've seen. They could easily be written in a latin-like font, maybe similar to this: 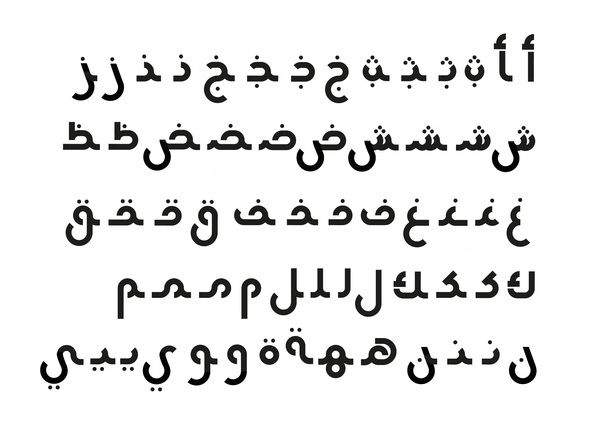 If you'd like a language close to Europe, you could use Cyrillic letters. The letter Ш (sha) is the only one currently widely in use. There are also other symbols from other languages in use.

If none of these are sufficient, there are tons of other languages in the world to find symbols from. And you can also just create your own.

Is there any kind of push for such a thing?

Not really. Learning new symbols may take some time, and people tend to use those they already know. Then again, there is nothing stopping you from using new letters and symbols, as long as you explain their meaning.

1
Greek sigma symbol correct representation?
19
What do Greek Mathematicians use when they use our equivalent Greek letters in formulas and equations?
1
Greek symbol for bit?