What is the intuition behind the definition of the differential of a function?

The most classical answer is probably: $df_p$ is the best linear approximation of $f$ at $p$, in a sense that can be made precise. 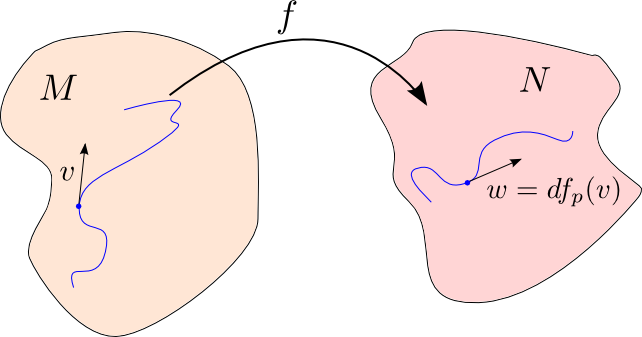 I find this interpretation of the differential useful both conceptually and also very often practically.

So, what is the differential of $f_p$? I think of it a useful change of perspective: it allows you to think of $\frac{\partial}{\partial x_j}(f_p)$ not as a function of $f_p$, but as a function of $\frac{\partial}{\partial x_j}$. This is useful because it allows you to define a very natural map from smooth functions to the dual space $T^*_p M$. On one hand, with this map you can easily prove that $dx_1,\dotsc,dx_n$ is a basis for this space. On the other hand, it suggests that if we can reasonably map $0$-forms to $1$-forms, then it might not be too hard to extend this idea to a map from $n$-forms to $n+1$-forms. Indeed, this is possible and it is what we call the exterior derivative.

This perspective is very useful, because it allows you to "compare" the tangent spaces of two manifolds (in to corresponding points). I don't think that its motivation is measuring how $\phi$ changes, though; maybe historically, but not in this formalism. You may probably try to do so by passing through local charts, and indeed Boothby does something similar in examples 1.9 and 1.10, chapter 4, of his book (pp. 112-115 in my edition).

Note: Your question asked about the intuition (or, I think, motivation) of the definition of differential in differential geometry, and I hope I made this clear. On the other hand, from your comments it seems like the sources of your confusion are Spivak's book and the effort to reconcile this definition with the classical notion of differentials as "infinitesimal quantities". Now, to quote L. Ryder's book:

Just before the paragraph you quoted in your comments, Spivak writes (emphasis mine):

Classical differential geometers (and classical analysts) did not hesitate to talk about "infinitely small" changes $dx^i$ of the coordinates $x^i$, just as Leibnitz had. No one wanted to admit that this was nonsense, because true results were ob­tained when these infinitely small quantities were divided into each other (pro­vided one did it in the right way).

This simply means that the classical formalism is not rigorous: you may think of "infinitesimal changes" if it helps you visualise what you're doing, but you can't trust any result you obtain in this way until you prove them using solid definitions.

He then goes on saying that while we cannot say how much is an "infinitely small" change (at least in the framework of standard analysis), we can still say "where our function is going", like with tangent vectors to a curve. Furthermore, classically the differential of a function is seen as its variation in front of an "infinitesimal" variation in its variables, so you could start formalising it as a function of this change. Since we said that we can still (intuitively) think of change as a tangent vector it then becomes a function on the tangent space.

If $p$ is a "generic" point for the function $f:\>{\mathbb R}^n\to{\mathbb R}$ then the rate of change of $f$ when walking away from $p$ depends on the chosen direction, but not in an arbitrary way: There is a direction of maximal increase, there is a plane through $p$ with virtually no change of $f$ when walking away staying in this plane, and there is a direction of maximal decrease. One can measure these various rates of change using directional derivatives: If $u$ is a unit vector one can define $$D_uf(p)=\lim_{t\to0+}{f(p+t u)-f(p)\over t}\ .$$ This idea does not tell us anything about how $D_uf(p)$ depends on $u$. In reality there is a certain vector $\nabla f(p)$, called the gradient of $f$ at $p$, such that $D_u f(p)$ can be computed for all $u$ by the formula $$D_u f(p)=\nabla f(p)\cdot u\ .\tag{1}$$ This shows that the "linear behavior" of $f$ when walking away from $p$ is encoded in this vector $\nabla f(p)$ once and for all.

Like always, the intuition comes from the Euclidean case — here even the one-dimensional case!

In the differential geometry of the line $\mathbb{R}$ with coordinate function $t$, we have

These applications may be a little hard to tell apart at first, but it becomes more clear when you see how the line is used:

This is consistent with the other two places we could do the combination:

As a side effect of my algebraic tendencies, I personally prefer a "differential forms first" approach to this sort of thing; IMO expressing things from the algebraic perspective tends to make calculation cleaner and more intuitive. In this approach, one might define the tangent vectors as linear functionals on the differentials.

I've never seen the foundations of differential geometry developed in this way, but I imagine you would start define the cotangent bundle in a manner analogous to however you would have defined the tangent bundle.

However, in other subjects where functions play more prominence at the foundational level, such as algebraic geometry, differential forms first is a standard approach.

Not the answer you're looking for? Browse other questions tagged differential-geometry intuition vectors differential-forms or ask your own question.