I am having hard time with forming a geometric intuition of pullback and pushforward.

The definition the book gives is like this: There are two open sets, $A$ and $B$. There is a dual transformation of forms $\alpha^*$ between the forms on $A$ and $B$. Given a $0$-form $f:B\to\Bbb R$, $(\alpha^*f)(x)=f(\alpha(x))$. Then given an $k$ form $\omega$ on $B$, the book does on to define the k form $\alpha^*\omega$ the same way. I cannot get the geometric intuition behind all there. Can someone please help me with it? Any intuition would be hugely beneficial.

I am using Munkres "analysis on manifolds"

Suppose you have a map $\alpha: A \rightarrow B$. There are certain associated items that "go forward" or "go backwards":

Basically, geometric objects "go forward" and functions on them "go back."

I think of it like this: If you have a mapping $\alpha: A \to B$, you would like to use it to transfer infrastructure like real-valued functions, vector fields, $k$-forms, etc, between $A$ and $B$. The mapping $\alpha$ already lets you assign to each point $x \in A$ an associated point $y= \alpha(x) \in B$, but you'd like to use it to form associations between functions and more.

The pullback/pushforward catch is that the association does not always run in the same direction. The mapping $\alpha$ takes points in $A$ and maps them to points in $B$, but for functions, the induced association which is the one you gave goes the other way, namely

Because the induced mapping $\alpha^*$ runs in the reverse direction ($B$ to $A$) as $\alpha$ does ($A$ to $B$), it is known as a pullback. It helps to draw a picture. Here is one from Baez and Muniain's wonderful book Gauge Fields, Knots, and Gravity, which I highly recommend for this topic as well as many others. Note that the following correspondence holds between their notation and yours: 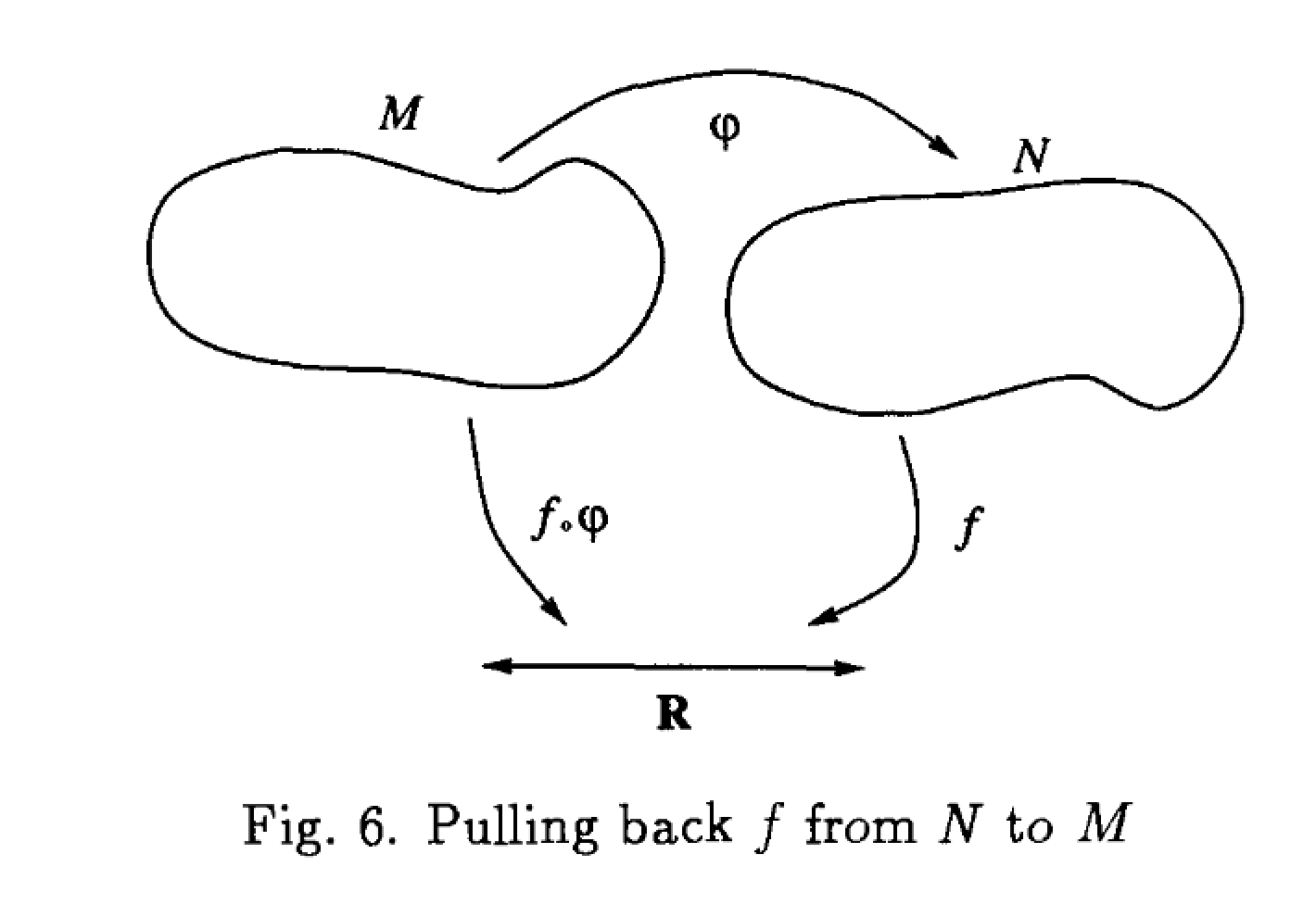 In the case of vector fields, these can be viewed as directional derivatives in a given direction at each point say of $A$, so a vector $v$ on $A$ should map functions $g$ defined on $A$ to scalars. We can use our already established pullback $\alpha^*$ that maps $C^{\infty}(B)$ to $C^{\infty}(A)$ to define a pushforward of the vector $v$ on $A$ to a vector $\alpha_*v$ on $B$, by

Not the answer you're looking for? Browse other questions tagged differential-geometry intuition differential-forms or ask your own question.

7
Intuitive explanation for the relation between push-forward and pullback