Geometric Interpretation of the Basel Problem?

Does the Pi in the solution to the Basel problem have any geometric significance? Every time I see Pi, I have to think of a circle. I would love to see a nice intuitive picture connecting the Basel problem with geometrical figures. Anyone here been lucky enough to stumble upon such a thing?

The Montreal interpretation of the Basel problem

Suppose you randomly pick a street in the left window, one which is parallel to that window (red streets). Similarly, you pick a blue street in the right window: 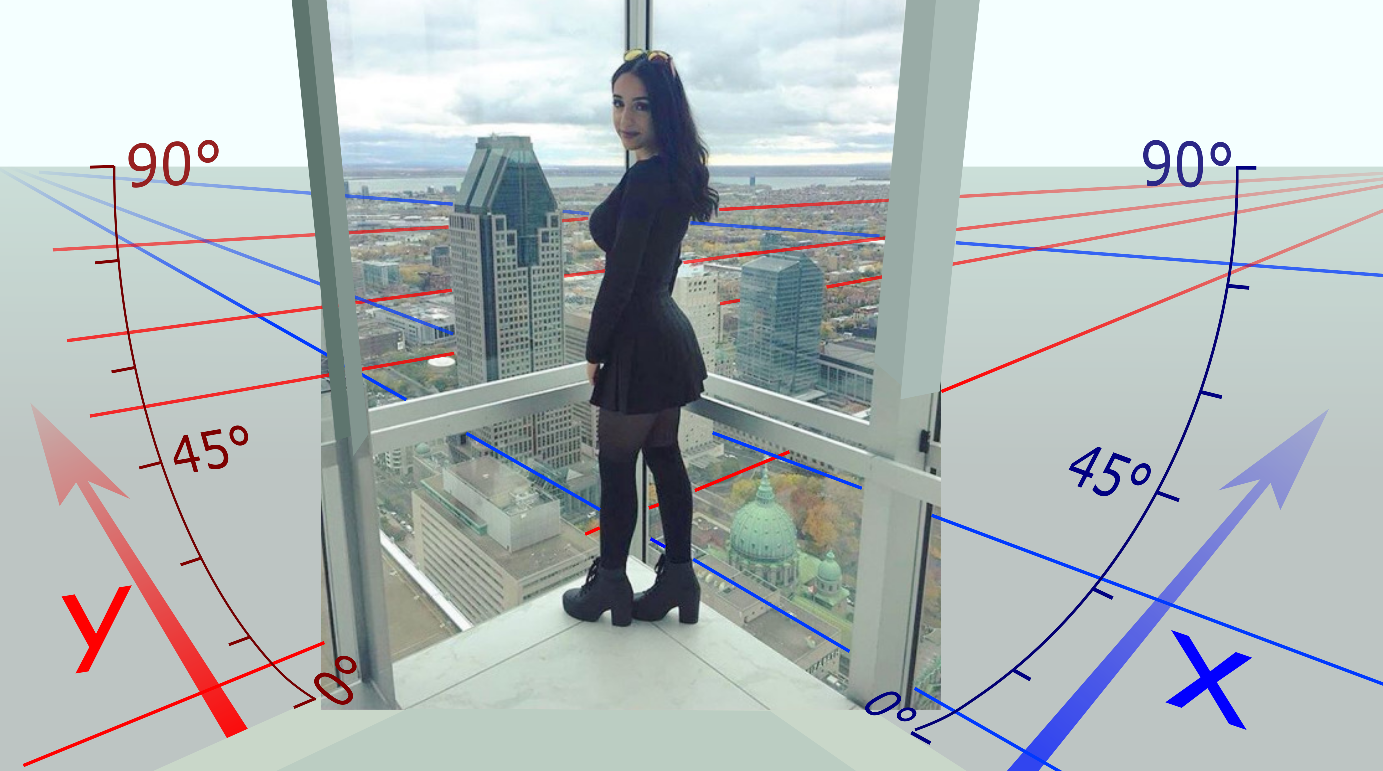 Then, from this perspective the cross section between the two streets has 50% chance of being visible in the right window (the blue street is farther away than the red street).

Okay, I assumed that in each window the elevation angle of the picked street was uniformly distributed between $0^\circ$ and $90^\circ$. This means that the distances are Cauchy distributed:

NB: The unit distance of $\color{blue}{x}$ and $\color{red}{y}$ is the viewer’s height above the ground.

The statement that the cross section is in 50% of the cases visible in the right window, is equivalent to saying that the ratio $\frac{\color{red}{y}}{\color{blue}{x}}$ has 50% chance being smaller than 1. Note that this ratio is the tangens of the azimuth where the cross section is located.

A ratio of two similar Cauchy distributions, is distributed as follows:

We want to say what it means to pick a random unimodular lattice, so we'd like to parametrize all unimodular lattices, modulo rotation. Starting with a unimodular lattice, we can rotate it so that one of its generating vectors lies on the $x$ axis. Then it is spanned by vectors of the form $t^{-1/2} (1,0)$ and $t^{-1/2} (s,t)$ with $t>0$. It's traditional to use the complex number $z = s + t i$ in the upper half plane to represent this lattice. However, the representation isn't unique: $z = 2i$ represents the same lattice modulo rotation as $1+2i$ and $i/2$ and so on. But you can always pick the shortest vector in the lattice as the first basis vector and the next shortest (independent) vector as the other one. If you do this, every unimodular lattice in $\mathbb R^2$ modulo rotation corresponds to exactly one complex number in the fundamental region pictured below. 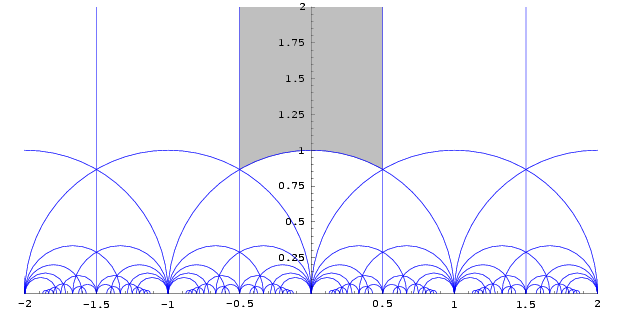 We want an appropriate way to pick random elements of this set, so we want a notion of "area" in the fundamental region. It turns out that the right notion comes from thinking of the upper half plane as a model of hyperbolic geometry. The hyperbolic area of a small $ds$ by $dt$ rectangle at $(s,t)$ is $t^{-2} ds\, dt$. The reason this is the right way to measure area is that it's preserved by the action of $\mathop{SL}(2,\mathbb R)$ on the upper half plane, which means the corresponding distribution on unimodular lattices will be also be invariant under the action of $\mathop{SL}(2, \mathbb R)$.

We can compute the area of the fundamental region using a double integral:

(This is the most mysterious place that $\pi$ appears in this argument. To better explain its presence, you can give an alternate proof that $A = \pi/3$ by noting that the fundamental region is a hyperbolic triangle whose angles add up to $\pi - \pi/3$. Hyperbolic geometry is a lot like spherical geometry, but with curvature -1 instead of curvature 1. If you're comfortable with how $\pi$ appears in areas of triangles in spherical geometry, it's natural to expect it to play a similar role in hyperbolic geometry.)

For example, the probability that a random unimodular lattice in $\mathbb R^2$ contains a nonzero element in the unit ball is just $1/A = 3/\pi$. The fact that this is quite close to 1 agrees with intuition.

(One might argue that to really explain why a factor of $\pi$ appears here, one should not only explain why it appears in the area $A$ of the fundamental region, but further explain why it does not appear in the area of this subset. That second part is left as an exercise to the interested reader; I don't have a short satisfactory explanation. You could start by reformulating the question in terms of total curvature along the boundary.)

A primitive element of a lattice is a nonzero element which is not a natural number multiple of any other element, i.e. an element which can be used as one of the two generators of the lattice. Let $\Lambda_1$ denote the set of primitive elements of $\Lambda$. Note that if $\Lambda$ in unimodular and $r < 1$, then the ball $B_r$ either contains no elements of $\Lambda_1$ or exactly two, $v$ and $-v$. If it contained any more, they'd span a parallelogram of area less than $1$, so the lattice wouldn't be unimodular. From above, the probability that it contains exactly two is $r^2/A$. So the expected number of primitive vectors of a random unimodular lattice which lie in $B_r$ is

(Even in the case $r > 1$, I think you can compute this expectation directly using the same double integral as before. But the region of integration is no longer a subset of the fundamental region, so making this argument would involve cutting up and translating bits of the hyperbolic plane around. The straightforward case when $r < 1$ is enough for our purposes.)

But you can compute the same expectation in a more straightforward way. Heuristically, generating a random unimodular lattice boils down to starting with $\mathbb Z^2$ in $\mathbb R^2$ and applying random elements of $\mathop{SL}(2, \mathbb R)$ to it. This smears out the nonzero lattice points uniformly over all of $\mathbb R^2$. And since the points of the original lattice had density 1, this uniform smear also has density 1, so the expected number of nonzero lattice points that land in a given set is precisely the area of that set.

More formally, consider the measure $\mu$ on $\mathbb R^2$ given by $\mu(S) = \mathop{\mathbb E}\left( \left| S \cap \Lambda \mathord\setminus \{0\} \right| \right)$, where we average over all unimodular lattices $\Lambda$. Because the distribution on $\Lambda$ is invariant under the action of $\mathop{SL}(2,\mathbb R)$, the measure $\mu$ is also invariant under that action. That means it must be some multiple of the usual Lebesgue measure, except possibly a singularity at the origin. You can check that there's no singularity, and check that the multiple must be $1$ by considering something like the limit of $r^{-2} \left| B_r \cap \Lambda \mathord\setminus \{0\} \right|$ as $r \to \infty$ for each fixed $\Lambda$. So $\mu$ is the usual Lebesgue measure and

Comparing this to the previous expression, we have $2\zeta(2)/A = \pi$ and hence

Here's a reference that might interest you: Elementary Proof of Basel's Problem

His work is also discussed in this lecture: Why Pi?

Check out these papers on the computations and details: https://www.maa.org/sites/default/files/pdf/news/Elkies.pdf http://www.staff.science.uu.nl/~kolk0101/Publications/calabi.pdf

Not the answer you're looking for? Browse other questions tagged number-theory riemann-zeta pi geometric-interpretation or ask your own question.

695
Different methods to compute $\sum\limits_{k=1}^\infty \frac{1}{k^2}$ (Basel problem)
17
Where does $\pi^2$ appear spontaneously within Physical Phenomenon and Mathematics Equations?
98
Motivation for Ramanujan's mysterious $\pi$ formula
13
Basel Problem - Area of $\frac 16$ of Circle with Radius $\sqrt{\pi}$.
2
What is the rationale behind the famous pi formula of Ramanujan