How can the centers of these 5 related circles be specified as a formula?

This is my first time posting in this forum, so please forgive me if my question is too involved or if I've posted it in the wrong area. I hope someone finds it interesting enough to try their hand at it.

In case the picture doesn't show up inline, or if you want to open it in another window so you can see it while you read the rest of the problem, here are a few different links to it:

Regarding the drawing, the following facts are given:
1) All 4 corners of the bounding rectangle are 90 degrees.
2) The lower left corner is considered to be the origin (0,0).
3) The lower edge is 1 unit in length.
4) The Red quarter-circle has its center at (0,0) and a radius of 1.
5) The center of the Purple and Blue circles are on the Y axis.
6) The centers of the Orange and Yellow circles are on the vertical line defined by X=1.
7) All of the circles are tangent to one another wherever they appear to be so in the drawing. (This isn't a visual trick. They aren't 'just close'.)
8) Similarly, all of the straight lines shown are between centers of various circles and are either tangent or normal to the circles wherever they appear to be so. (Again, this isn't a trick question.)
9) The Green circle and the Blue and Yellow Half circles are all tangent to the top of the bounding rectangle, just as they appear to be.

The remaining straight lines and multi-colored circles are given as additional geometric hints, showing for example that the points of tangency for any three of the mutually tangent circles in question will always fall on a multi-colored circle whose center is at the intersection of the lines that bisect the angles formed by the centers of the respective circles. Now that's a lot of words for one sentence, so let me try to break it down and explain one case as an example. Consider the mutually tangent Purple, Green and Orange circles. The triangle drawn between their centers, intersects each of them at their respective points of tangency. The three lines that bisect the three corners of that triangle will necessarily intersect at a common point. That point of intersection is the center of the multi-colored Purple/Green/Orange circle that overlaps the original three. Furthermore, lines drawn from the center of this new circle to the three original points of tangency are also tangent to the original circles at the same points of tangency shared by each pair of original circles. Finally, the resulting triangles are necessarily all right triangles!

When all of the circles and arcs are removed from the drawing, what remains is a set of 35 right triangles that completely fill the outer rectangle. These triangles can be grouped by the color of the circle that originally generated them:

Another interesting point. The top of the Orange and Purple circles may initially appear to be at the same height. In fact, they are not. It turns out that they can't be the same if all of the other rules are met. They just happen to be close.

Actually, if the Blue, Green and Yellow circles were taken out of the picture and the rectangle shortened and the Purple and Orange circles resized slightly so that their tops were both at the same level, then the problem is very simple to solve for just those two circles. It's only when the three remaining circles are added to the top as I have shown that the problem gets just past the edge of my ability.

Although I don't want to expound on it here, I have actually build a spreadsheet that reflects nearly all of the mutual dependencies, but since the spreadsheet can't have circular references, it ultimately ends up with two different independent forks or branches of calculations and the only way I have been able to solve it is to set one cell equal to the difference between the final equations on each branch. This difference represents the cumulative error between the branches using the baseline estimated angles. I then have Excel apply successive approximation - using "What-if" - to adjust the approximated values until the error becomes as nearly zero as possible. This approach gets me close enough for the practical purpose of drawing it here, but it still leaves my original question unanswered. To reiterate: How can I derive a formula that exactly defines either the radii or the center points for each the five circles I've specified?

One final note, I suspect that this may end up requiring a calculus solution. If so, it's over my head (for now). I'll still appreciate any responses, but I'm hoping for a solution that I can follow using just geometry, trig and algebra. A compass and straight-edge solution, in the unlikely case that it's even possible, would be really cool, but probably wouldn't answer my real question.

Thanks for playing,
David 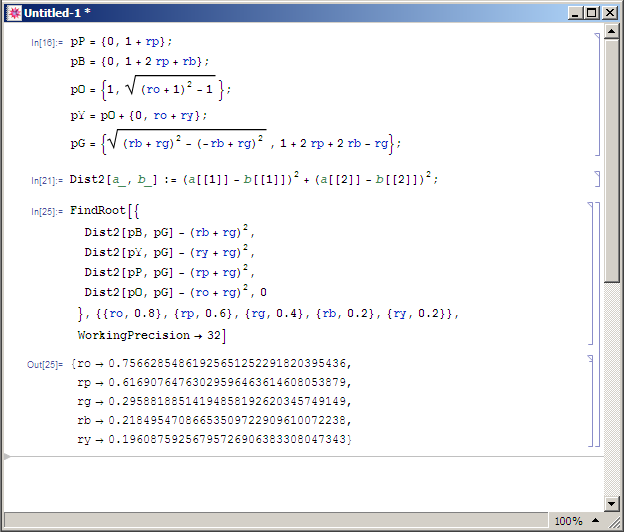 Plugging those numbers into the Inverse Symbolic Calculator doesn't turn up anything, so these values cannot be represented analytically in a simple way.

In general, what you have described is known as a geometric constraint-solving problem. These sorts of problems have been studied quite a bit over the last 20 years or so; a good survey of the available techniques is here.

Some problems can be solved by sequential ruler-and-compass constructions, but most can not. Generally, you express each given constraint as an equation involving circle centers, radii, and other unknowns, and then you have to solve the resulting system of equations simultaneously. The equations will be non-linear, so some clever algebra or numerical methods will be required. I'm not surprised that Excel didn't work too well.

Most modern CAD systems include constraint solvers. If you have access to a decent CAD system, I'd guess that it will solve your problem.

Then the things we know are:

Now hand these equations to Mathematica or Maple, and solve for each $(x_i, y_i, r_i)$.

Mathematica's NSolve function returns 8 solutions, but only one of them is realistic:

Mathematica couldn't find a symbolic solution, so it's unlikely that one exists. Also, since numerical solving gave 8 solutions, this suggests that the solution ultimately involves finding the roots of a polynomial of degree 8, and there are no formulae for such roots, except under very special circumstances.

I plugged the above answers into a CAD system to check. Looks right to me, and it agrees with the answer from @GEdgar below. 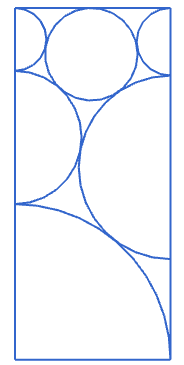 The blue circle has center $(0,e)$ and radius $\varepsilon$.

The height of the rectangle is $q$.

Not the answer you're looking for? Browse other questions tagged geometry circles analytic-geometry or ask your own question.

3
Math and equations for external tangent lines between two dissimilar circles?
0
How to construct center of homothety for two circles which overlap
1
How far apart are centers of a set of Johnson Circles if the centers are equidistant?
2
Finding three circles based on their points of tangency?
2
Given two tangent circles, find the two centers of a third that is tangent to both with given radius
2
Proving a set of circles to be belonging to a family of circles.
2
3 circles with radii 66, 77, and 88 externally tangent to each other, find the radius of the circle internally tangent to the other circles.
1
Finding the area of a triangle formed by the centers of circumscribed circles of a big triangle