What is the difference between Quaternions and Bicomplex Numbers?

So, I know Quaternions are basically 4 dimensional Complex numbers, and the dimensions can double forever to Octonions, Sedinions, etc. I recently heard about bicomplex numbers, which are also sort of 4 dimensional complex numbers. I looked into it a bit, and I found that bicomplex numbers are a commutative version of quaternions. But I wanted to know how exactly that works. How is the multiplication defined? Also can that be extended to 8-Dimensional biquaternions, 16-D bioctonions, etc? And how are those defined exactly? I know with regular hypercomplex numbers, you lose properties as you go up in dimensions, so does the same thing happen with the bi- ones? If so does it just lose the property that it would normally lose one dimension lower? Or do they not lose properties at all? Any answers would be greatly appreciated.

I'd never heard of a bicomplex number, but I like algebra, so let's go for it. From what I understand, reading Wikipedia and playing around:

But, these bicomplex numbers are certainly don't act like quaternions. For one, they form a commutative algebra; the order of multiplication never matters! But more seriously, we have zero-divisors:

This is a pretty serious departure from the quaternions.

It turns out that the biquaternions are isomorphic to the direct sum $\mathbb{C} \oplus \mathbb{C}$ of the field of complex numbers with itself (here, addition and multiplication are performed component-wise, like vector addition). This is not obvious to me, but it's believable.

Direct sums are fairly uninteresting: Just slap two copies of something together, and there you go! It explains why we have zero-divisors, and commutativity. We just do everything we normally would, but do it twice; business as usual.

The quaternions on the other hand - now that's an algebra! Associative, but not commutative; no zero divisors; we can define a norm. Generally, life with the quaternions is great.

Unfortunately, I'm still processing all the details myself, so it's up to you to figure out exactly what "twisting" something entails. Essentially, it's like a direct sum, but with the terms interacting multiplicatively more than just "component-wise," we need some extra magic thrown in.

John Baez' write up on octonions, where I first saw the term "twisted group algebra." Lacking on details of the construction, lots of attention to the big picture.

John Bales' write up on "Properly Twisted Group Algebras", which is way more detail than I'd hoped for, but could fill in some of the gaps.

Bicomplex numbers, or tessarines is a commutative algebra as other people said.

It has zero divisors. And I would say, being commutative is a lot more important than disadvantages from zero divisors!

There is nothing essentially bad regarding zero divisors: this means that we have some elements by which we cannot divide, but we anyway had one such real number: zero.

Unlike what the other answer said, of course there is norm (modulus) in bicomplex numbers.

They can be represented as real matrices of certain structure with usual matrix operations, so one can experiment with them in any computer algebra system that allows to apply analytic functions to matrices. 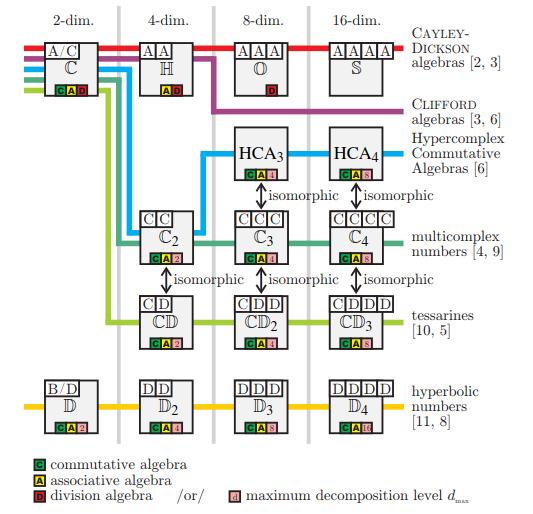