How to explain the formula for the sum of a geometric series without calculus?

This could be explained using algebraic transformation but i would rather show a very simple geometric proof for sum: 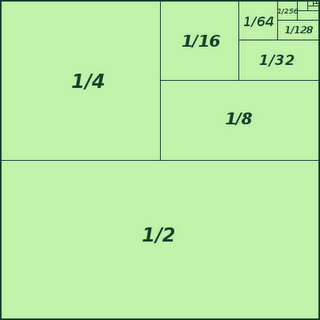 The equality is equivalent to

For example I want to convince my student that

Or is that what you wanted to avoid?

I mean it is not so difficult to understand that nearly all terms cancel... ?

As I understand your question, your student know and understand the formula for a finite geometric sum.

We need to get rid of the idea that the average 14 year old is not yet not old enough to do abstract math. The undisputable fact is that the older you are the more difficult it becomes to learn it. If the average 14 year old would really struggle to understand the simple math needed to sum a geometric series, then how come they can operate their smartphones with ease?

So, I would say you could just do the summation of the first n terms using the standard algebraic method e.g. given in Leartses's answer. And then you argue that the limit is 4/3 by considering the difference between the finite sum of the first n terms. You show that for every $\epsilon>0$, no matter how small, there exists an N such that for all n > N the difference is smaller than $\epsilon$. There are many ways to explain this by drawing pictures. You can explain that if you replace 4/3 by another number then it this "game" of finding N for every $\epsilon$ will go wrong.

You happen to mention one of my favorite series. This may be convoluted, but consider those fraction in binary.

No calculus, and binary always comes in handy, in my opinion.

Perhaps better to teach growth rather than decay. An old story goes...A king wanting to please his subject asked him what he wished for.The clever subject replied "Give me a checker-board, put 1 grain of wheat in the the first square, two in the second, four in the third to fill up the entire board (until $2^{64}$ grains in last square) to which the king readily agreed, until all go-downs ran out of wheat..

Calculation of compound interest can be also instructive.If money doubles every 5 years how much amount after 10 years and so on..

If your $14$ year old is willing to accept without proof that the sum of a geometric series with positive ratio $\alpha<1$ exists at all (in your example for $\alpha=\frac14$), then I would argue as follows. Clearly all terms after the initial term$~t_0$ represent $\alpha$ times the total sum$~S$, since the terms taken in order have all been multiplied by$~\alpha$ with respect to the original terms. But then $t_0$ must be equal $1-\alpha$ times$~S$. But that makes $$S= \frac{t_0}{1-\alpha}.$$ In other words you don't need the finite sum to get at the infinite sum. One can however recover the finite sum as the infinite sum minus the part of the infinite sum excluded from the finite sum. If $t_{n+1}$ is the first term excluded, then this gives for the finite sum $$ \frac{t_0}{1-\alpha}-\frac{t_{n+1}}{1-\alpha}=\frac{t_0-t_{n+1}}{1-\alpha}=t_0\frac{1-\alpha^{n+1}}{1-\alpha}, $$ which is your sum. Actually like this it would be nicer and more natural to call the first term excluded $t_n$, and let the sum have $n$ rather than $n+1$ terms, but I've adapted to the notation of the question.

While I like the graphical examples as a way of explaining this, I think the numerical intuition might be easier if you went for examples with nice decimal expansions.

Such examples are, in my experience as an educator, a good way to introduce the concept of an infinite series whose partial sums approach a limit. That seems to be the major conceptual hurdle here. The actual algebra can come later, and not necessarily very much later. If they know the formula for the sum of the first $n$ terms of the series, then the limiting case can be established by considering the behaviour of $r^n$ as $n$ increases, when $-1 < r < 1$. I'd suggest that you deal with the effects of (repeated) multiplication by numbers between $0$ and $1$ as a prerequisite, before you broach the subject of geometric series. When exploring the limiting case algebraically, you can confirm it works on some examples with "obvious" answers, such as those listed above.