Shortest path on a sphere

I'm quite a newbie in differential geometry. Calculus is not my cup of tea ; but I find geometrical proofs really beautiful. So I'm looking for a simple - by simple I mean with almost no calculus - proof that the shortest path between two points on a sphere is the arc of the great circle on which they lie. Any hint ?

Edit: Or at least a reference ?

Here's a geometric observation that can hardly be called a "proof", but may be appealing nonetheless.

Assume $q \neq -p$. If you believe there exists a unique shortest path from $p$ to $q$, it's not difficult to see that the "short" great circle arc is the only candidate: Every point not on the great circle through $p$ and $q$ is moved by some isometry of the sphere that fixes $p$ and $q$.

(A similar argument "justifies" that the shortest path between distinct points of the Euclidean plane is the line segment joining them.)

You can show that great circle arcs are geodesics by parameterizing such an arc so that it has unit speed, and then showing that the acceleration along the arc is perpendicular to the sphere surface. (This assumes you accept that geodesics have the characteristic that their acceleration is perpendicular to the tangent plane of the surface at each point of the geodesic.)

Then uniqueness of the geodesic from a point in a direction shows it must be the great circle arc.

I realize this might not be what you seek because it doesn't connect directly to shortest paths...

This method only works for this problem. By contrast, calculus-based methods (see the Calculus of Variations) work for other problems that lack such symmetries, and hence you should still learn those approaches so you can solve the shortest path problem for e.g. ellipsoids.

In the plane, WLOG let the two points have the same ordinate. For any explicit curve, the length is given by

Similary, in spherical coordinates, WLOG let one point be the pole and the other such that $\theta=0$.

My answer is inspired in @CJ Dennis insight.

We know that the length of the segment is the same no matter how we rotate the sphere. By saying that we are at the center of the sphere looking above at the segment, we are saying that we can position the first point $A$ at the north pole, and the second point $B$ toward the east. The segment can only move in three dimensions, but since it is attached to the sphere, we have only two dimensions of free motion. As we scan the segment from north to east (from $A$ to $B$). The two free dimensions are "west-to-east", "north-to-south". If the segment $AB$ is not along a great circle, there is a projection of it into the north-to-south direction, this projection is a wiggle in the path that only will make it longer. That is, if the trajectory is in a great circle, the path looks like a straight line. There is no projection in the "north-to-south" directions and there is no shortest path than this.

Let a plane passing through the 2 points and the sphere center cut it. The shortest path is such a line of intersection. Hallmark: Surface unit normal and unit normal to the arc coincide even if there is no sphere around ... they are the same great circles..aka.. geodesics.

An argument based on curvature:

Given two points, think of all the segments that joint the two points. The straightest one should be the shortest. By "straightest" I mean the less curved. Curvature add length, that should be clear.

Now, take any plane intersecting the two points. Why plane? because it has the least curvature of all surfaces (0 curvature).

Then if the plane is very shallow the curvature will be larger. Hence the plane that, after intersecting both points, has the least curvature needs to be a plane that goes through the center. That is the arc of least curvature on the sphere. Then the shortest path is along a great circle.

The figure should help to explain the idea. 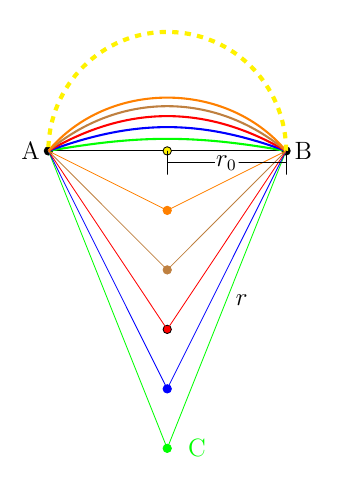 Assume that the points $A$ and $B$ are in the sides of the sphere just in front of your eyes. The center of the sphere is the green point $C$. This center is in the plane through the points $A$, $B$, and $C$ which has a great circle when intersecting with the sphere and it is the plane you are looking at (plane having the "flat" screen of your computer) As the planes with the line $AB$ on them move away from the center (up in the figure) the radius of curvature decreases (from $r$ which is the radius of the sphere down to $r_0= AB/2$ which is the radius of the intersection of a horizontal plane having the points $A$ and $B$.). See that the planes are being tilted because they are pinned to the line $AB$, so they are rotating down beyond $AB$, up toward the reader. That is, the arcs of circle that you see are all in different planes but drawn in the vertical plane. The green arc is the only arc in the vertical plane. The yellow is in the horizontal plane, and all the others are tilted planes between vertical and horizontal. The color of the dot (center) matches the color of the curve. When the plane, which started vertical rotated around the axis $AB$ until it becomes horizontal, the intersection is a the yellow dashed circle (only half shown here) in the figure. That is, the largest it can get, being flat (no wiggling. Of course you can wind all you want and that is where there is no upper limit, but the longest of the shortest is half circle with radius $r_0=AB/2$, that is $r_0 \pi/2$).

It should be clear from this figure that the green path is the shortest (after the black which is a sphere of infinite radius and has the center down at infinity).

However I decided to include a 3D picture, which I believe explains better the problem. I am using the argument on this stack exchange post: arc between two tips of vectors to plot the figure. Each arc has 200 points, and as the center move up from the origin the points get more and more spread, indicating that the length of the segments increase. 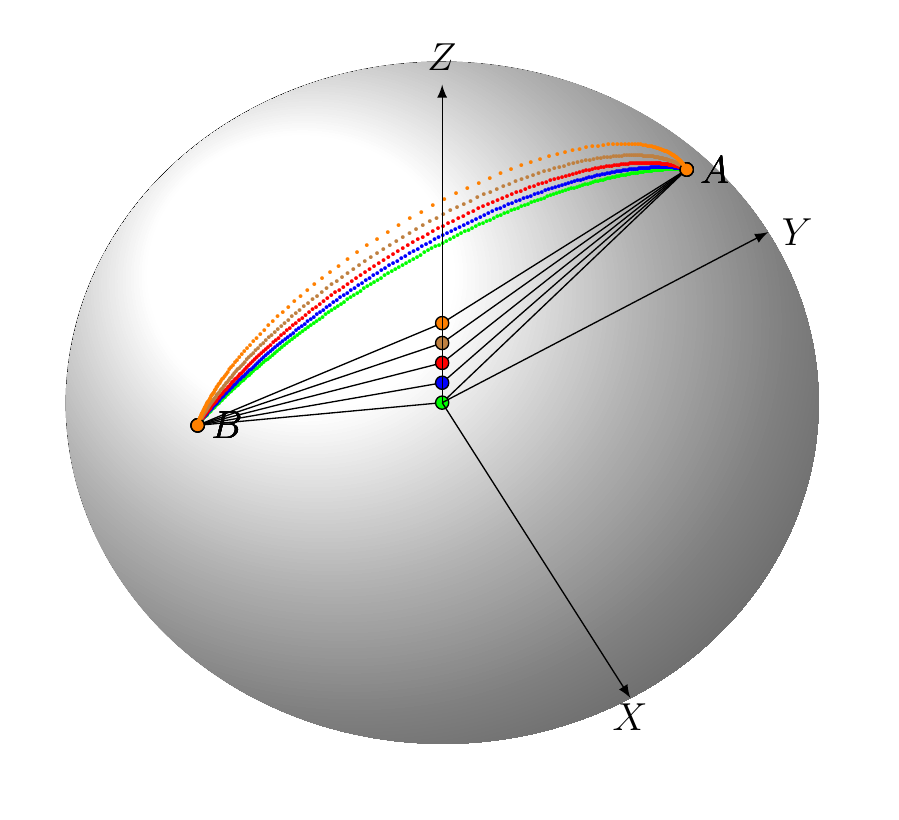 The only curve along the sphere is the green curve. All others are above, because they were rotated from the tilted plane to put them all in the same vertical plane for easier comparison.

The TiKz code for this is in this stack exchange post: draw an arc from point A to point B

It's not perfect but a more rigorous version of the following should work:

Take a sphere centered at the origin and two points. Your problem space is symmetric about the origin. Your looking for the third point on the path to define a plane that will contain the shortest path between the 2 points (and hence point c cannot be point a or b or we wouldn't have a clearly defined plane). Your three points will be co-planar. Every plane cut of a sphere results in a circle. Increasing the radius of that circle reduces the distance of the three points (triangle inequality). So we're going to change the goal of our third point that defines our plane: maximize the radius of the circle between the 2 points. Maximize radius by placing third point at center (that's the cut that's going to result in the largest circle). The 2 points will define arcs of the shortest and longest path between them, just figure out which is which.

An image worth a thousand words....

Stare at the figure and try to draw a path shorter than that between $A$ and $B$, or $B$ and $C$, or any of the fourth vertices with any of the other three. As you said, you want a geometrical argument. It should not take time to convince you that the paths drawn on this figure (and the paths you can draw in your mind for the diagonals $A-C$ and $B-D$) are all connected to an arc that is centered at the origin. Those are parts of big circles. 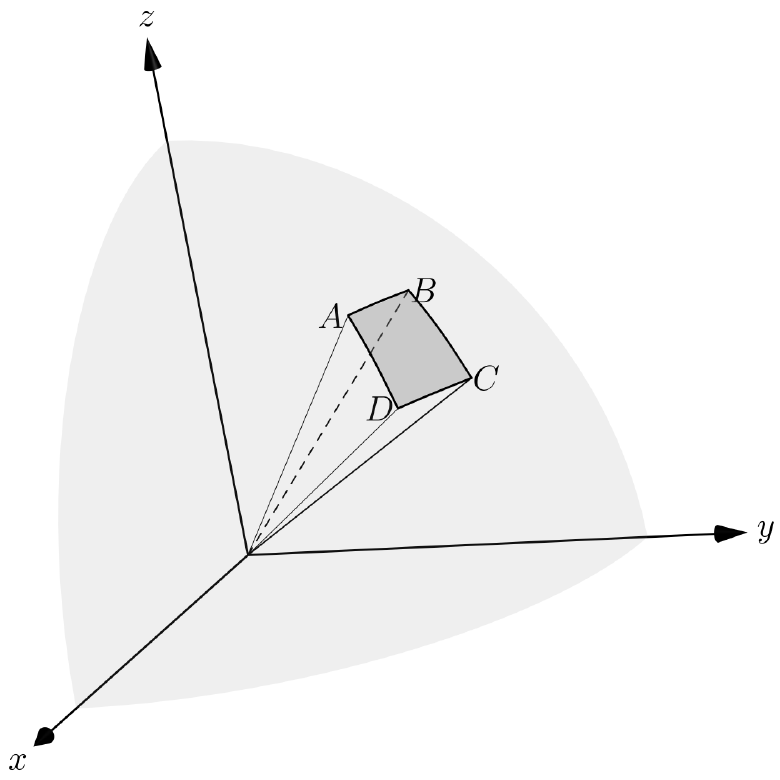 3
find arc between two tips of vectors in 3D
2
Where is my error when setting up the differential equation to find the length of a path on a sphere
1
Why are only greater circles considered lines in spherical geometry?
2
Geodesics of the $\mathbb{S}^n$ are great circles
0
Find The Geodesic Lines And Curves of A Surface

4
Introductory Treatment of Differential Geometry
57
A really complicated calculus book
5
the shortest path between two points and the unit sphere and the arc of the great circle
25
Advanced Differential Geometry Textbook
2
geodesics on sphere loring tu help
7
Shortest paths on a manifold with boundary are composed solely of geodesics and boundary sections?
1
Isometry of the torus and sphere to $\mathbb{R}$